A ripple effect of loss: US COVID deaths approach 500,000 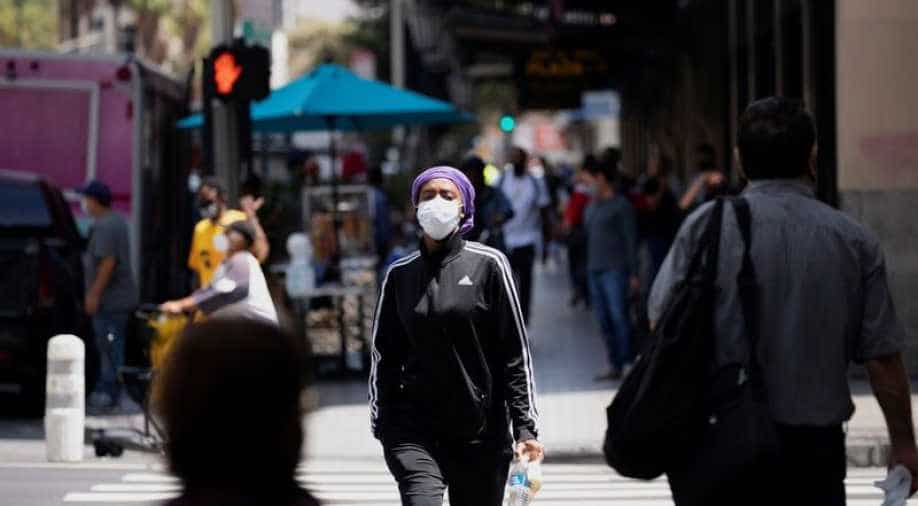 No other country has counted so many deaths in the pandemic. More Americans have perished from COVID-19 than on the battlefields of World War I, World War II and the Vietnam War combined

A nation numbed by misery and loss is confronting a number that still has the power to shock: 500,000.

Roughly one year since the first known death by the coronavirus in the United States, an unfathomable toll is nearing — the loss of a half-million people.

No other country has counted so many deaths in the pandemic. More Americans have perished from COVID-19 than on the battlefields of World War I, World War II and the Vietnam War combined.

The milestone comes at a hopeful moment: New virus cases are down sharply, deaths are slowing, and vaccines are steadily being administered.

But there is concern about emerging variants of the virus, and it may be months before the pandemic is contained.

Each death has left untold numbers of mourners, a ripple effect of loss that has swept over towns and cities. Each death has left an empty space in communities across America: a bar stool where a regular used to sit, one side of a bed unslept in, a home kitchen without its cook.

The living find themselves amid vacant places once occupied by their spouses, parents, neighbors and friends — the nearly 500,000 coronavirus dead.

In Chicago, the Rev. Ezra Jones stands at his pulpit on Sundays, letting his eyes wander to the back row. That spot belonged to Moses Jones, his uncle, who liked to drive to church in his green Chevy Malibu, arrive early and chat everybody up before settling in to his seat by the door. He died of the coronavirus in April.

“I can still see him there,” said Jones, the pastor. “It never goes away.”

There is a street corner in Plano, Texas, that was occupied by Bob Manus, a veteran crossing guard who shepherded children to school for 16 years, until he fell ill in December.

In the Twin Cities of Minnesota, LiHong Burdick, 72, another victim of the coronavirus, is missing from the groups she cherished: one for playing bridge, another for mahjong and another for polishing her English.

At her empty town house, the holiday decorations are still up. There are cards lined up on the mantel.

“You walk in, and it smells like her,” said her son, Keith Bartram. “Seeing the chair she would sit in, the random things around the house, it’s definitely very surreal. I went over there yesterday and had a little bit of a breakdown. It’s hard to be in there when it looks like she should be there, but she’s not.”

The virus has reached every corner of America, devastating dense cities and rural counties alike. By now, about 1 in 670 Americans has died of it.

Across America, the holes in communities, punctured by sudden death, have remained.

In Anaheim, California, Monica Alvarez looks at the kitchen in the house she shared with her parents and thinks of her father, Jose Roberto Alvarez.

Jose Alvarez, 67, a maintenance supervisor, worked the overnight shift until he died from the virus in July. Before he got sick, he would come home from his usual workday and prepare an early-morning meal. Monica Alvarez, beginning her workday as an accountant from her computer in the nearby dining room, would chat with him while he scrambled a plate of eggs.

“With his passing, we’ve rearranged some rooms in the house,” she said. “I don’t work in the dining room anymore. I’m glad for that. I’m sad, but I’m glad. It’s a reminder, being there.”

One year ago, as the coronavirus took hold in the United States, few public health experts predicted its death toll would climb to such a terrible height.

At a White House briefing March 31, Dr. Anthony Fauci, the top infectious disease expert in the country, and Dr. Deborah Birx, who was coordinating the coronavirus response at the time, announced a stunning projection: Even with strict stay-at-home orders, the virus might kill as many as 240,000 Americans.

“As sobering a number as that is, we should be prepared for it,” Fauci said at the time.

Less than a year later, the virus has killed more than twice that number.

The virus has disproportionately caused the deaths of Americans in nursing homes and other long-term care facilities, where infections spread easily among vulnerable residents: They account for more than 163,000 deaths, about one-third of the country’s total. In New Hampshire, 73% of COVID-19 deaths were linked to nursing homes through last week. In Minnesota, it was 62%.

The coronavirus has been especially lethal to Americans 65 and older, who account for about 81% of the country’s COVID-19 deaths.

One of them was a man nearly everyone called Mr. Bob.

Bob Manus, 79, was an unmistakable presence on the corner of Clark and Yeary in Plano, Texas. There was his black whistle, hanging around his neck on a lanyard — sharp, shrill and authoritative. A neon vest that he wore as part of his safety uniform. And his careful way with the children he guided across the street each morning and afternoon.

“He knew the families. He knew their dogs,” said Ann Lin, who lives nearby and walks her children to school. After Manus died of the coronavirus in January, the block changed, she said. “There’s a noticeable difference now. It’s this heaviness. And it’s a reminder of what COVID took.”

A group of parents has planned an honorary plaque to be erected at the spot where Manus worked.

“My kids were devastated,” said Sarah Kissel, the PTA president. “They went from seeing him every day to him never coming back.”

Manus has not yet been replaced. For now, his corner sits empty.

Some families have moved away from the places that are so painfully entwined with memories.

In April, Karlee Greer picked up her father, Michael Horton, 66, from the hospital where he had been battling the coronavirus. The doctors said he was ready to continue his recovery at home, and Greer had him stay with her family, setting him up in a bed in her daughter’s room.

Four days later, he died there, without warning. Even now, 10 months after her father’s death, Greer remains haunted by the space.

“Every time I walk into my daughter’s room, it’s like I see him there,” she said. “I see him around the whole house. I can’t stand to be there.”

On Friday, the family moved out, hoping that a new home would bring new memories.

‘Sad Day in Our History’

As the United States approaches 500,000 deaths from the coronavirus, there are few events in history that adequately compare.

The 1918 influenza pandemic is estimated to have killed about 675,000 Americans, according to the Centers for Disease Control and Prevention, when the country’s population was one-third of what it is now. But it also happened at a time when influenza vaccines, antibiotics, mechanical ventilation and other medical tools did not exist yet.

Drew Gilpin Faust, a historian and former president of Harvard University, said medical and societal achievements in the United States had caused many Americans to believe that “we were ready for anything — that we had conquered nature.”

“When there were field hospitals in Central Park, and bodies piled up because there was no capacity to bury them, we were just so shocked at ourselves and had not thought this would ever happen to us,” said Faust, whose book “This Republic of Suffering” explores how Americans grappled with death after the Civil War. “That sense of mastery over nature has been so seriously challenged by this pandemic.”

Deaths from COVID-19 in the United States came faster as the pandemic went on. The first known death occurred in February 2020, and by May 27, 100,000 people had died. It took four months for the nation to log another 100,000 deaths; the next, about three months; the next, just five weeks.

Although daily deaths are now slowing, about 1,900 deaths in America are being reported each day. As of Sunday evening, the toll had reached 498,649.

“This will be a sad day in our history,” said Dr. Ali Mokdad, a public health researcher at the University of Washington. “Our grandchildren and future generations will look back at us and blame us for the biggest failure in facing a pandemic, in the country that’s the richest country in the world. That we allowed people to die, that we didn’t protect our vulnerable populations — Native American, Hispanic and African Americans. That we did not protect our essential workers.”

It will still take months to vaccinate the American public, and new, more contagious variants of the virus could quickly undo the nation’s progress and lead to another spike.

The Institute for Health Metrics and Evaluation, an independent global health research center at the University of Washington, has projected that the nation could reach more than 614,000 deaths by June 1. Factors like how well people adhere to guidelines like mask-wearing and social distancing, plus the speed of vaccinations, could affect that estimate.