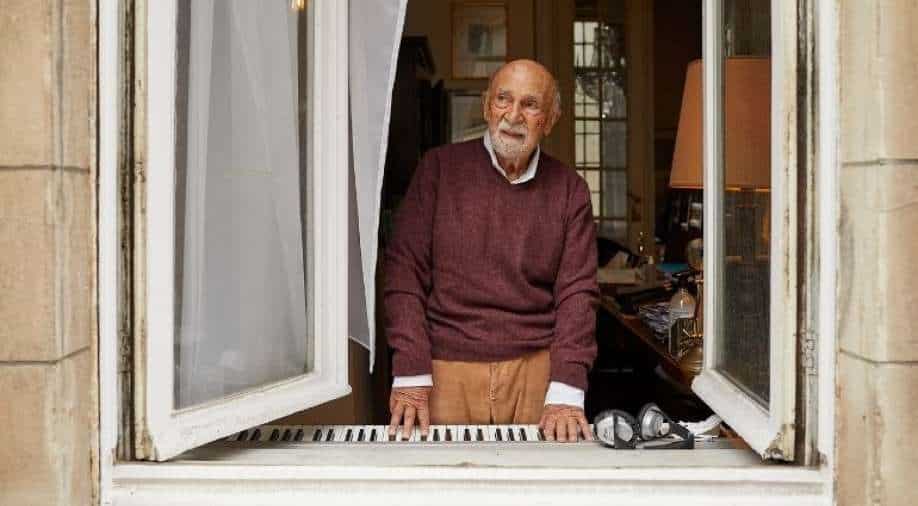 Simon Gronowski, a Holocaust survivor, at the electric piano he moved beneath a window of his apartment at the height of the first wave of the coronavirus in Europe, in Brussels, Oct. 22, 2020. Gronowski began to play regularly, filling the leafy streets with jazz notes and bringing relief to his besieged neighbors throughout the lockdown that lasted into late May. (Ksenia Kuleshova © 2020 The New York Times) Photograph:( The New York Times )

'I was afraid,' the pianist said. 'It’s not normal to just open the window and play.'

Simon Gronowski had committed many acts of bravery and generosity in his 89 years of life, and opening a window in April wouldn’t ordinarily have counted among them, but this was no ordinary April.

It was the height of the first wave of the coronavirus pandemic, which hit Belgium as hard as anyplace in the world. But as a Holocaust survivor, Gronowski had faced death more intimately before.

The diminutive lawyer summoned his courage, moved his electric piano to beneath a windowsill and flung the window open, letting in spring sunshine along with the thick, wary quiet of a city terrified of the virus. And he began to tap out a jazz tune.

“I was afraid,” he said. “It’s not normal to just open the window and play.”

But soon, his neighbors popped their heads out of their windows, some even donning masks and walking up to his house to hear better.

One took a black-and-white picture of him playing, printed it and slipped it in his mailbox later, writing, simply, “Merci.”

He began to play regularly, filling the leafy streets with jazz notes and bringing relief to his besieged neighbors throughout the lockdown that lasted into late May.

Amy Edwards Anderson, an English teacher from the United States who has lived in Brussels for 22 years, first heard Gronowski play while sitting in her backyard with her husband and three children. She was surprised, she said, because it quickly became clear this wasn’t someone practicing the piano. It was someone performing for the block.

The short window concerts burst into her family’s confinement and lifted them up.

“Here was someone who was amplifying music to share with neighbors for no other reason than to make people feel good during a difficult time,” she said. “A kind of unsolicited gift to the neighborhood.”

Gronowski had meant for his impromptu concerts to make people happy, but playing for others has also had intrinsic value for him his entire life.

“Music is a means of communication, of connection,” he said on a recent afternoon in his home office, surrounded by piles of documents.

Gronowski taught himself how to play the piano as a teenager because he, too, was seeking to communicate, to connect — first and foremost with his older sister, Ita, who had perished in Auschwitz in 1943 at age 19.

“I adored her,” he said. “She was a brilliant pianist.”

Gronowski’s first act of bravery took place many Aprils ago, when an altogether different kind of calamity was gripping Europe.

He and his mother were packed with dozens of others in a cattle wagon on the deadly route from Mechelen, a town where Belgian Jews were rounded up, to Auschwitz.

Of all the trains to doom, Gronowski’s became especially etched in Holocaust history. Known as “Convoy 20,” it was disrupted by three resistance fighters soon after departing Mechelen. In the commotion, dozens got a chance to escape into the farmlands of Flanders.

Soon after the train started accelerating again, Gronowski’s mother, perhaps emboldened by the incident and the glimmer of hope, urged him to jump off.

“I jumped because I listened to my mother’s orders,” Gronowski said. He leapt for his life. His mother did not follow.

“If I had known she was not going to jump, I would have stayed on the train,” he said, resting his cheek in his palm as if his head was suddenly too heavy.

For the next 17 months, the boy was hidden in the attics of some Catholic families. After Brussels was liberated in September 1944, he reunited with his ailing father, who had been in and out of the hospital for years, and eventually succumbed — to a broken heart, Gronowski believes — leaving the boy an orphan the following year.

Gronowski drew on the memories of prolonged confinement, the fear and desperate sadness of the 1940s, in a newspaper column he wrote as encouragement for fellow Belgians in late March as they struggled to settle into lockdown.

“Currently reduced to forced idleness, conducive to reflection, my thinking wanders and rejoins the confinements that I suffered 75 years ago, from 1942 to 1944, when I was 10-12 years old,” he wrote.

“Today, we can stay with our family or be helped by it, keep in touch, we can do our shopping, stock up on provisions, read the newspapers, watch television, but then we lived in terror, we lacked everything, we were cold, hungry and our families were separated, dislocated,” he added.

The pluckiness on display today was already burning inside the boy who had lost everything by the end of World War II.

After spending three years in foster care, he moved back into the empty family home on his own and took in lodgers to raise funds for his life and schooling.

By the time Gronowski had turned 23, he held a doctorate in law. He became a lawyer, married Marie-Claire Huybrechs, and had two daughters, Katia and Isabelle. And for six decades he said little about his perished parents, his beloved sister, Ita, or that day he jumped off a moving train on its way to Auschwitz.

“It was not a secret, but I did not talk about it,” he said, his upbeat mood momentarily darkening. “Why? Because I was feeling guilty. Why are they dead, and I am alive?”

All that changed in 2002, when, pressured by friends who knew his story, he decided to take on the past.

“I needed to bear witness and write my story, so I wrote my first book,” another act of bravery, one that gave Gronowski an unexpected new life of media appearances and a higher profile to advance progressive goals.

After “L’Enfant du XXe Convoi” (“The Child of the 20th Convoy”) was published and Gronowski’s story became more widely known in Belgium and beyond, he started giving lectures, especially at schools.

“It was very painful to stir it all up again,” he said. “But now I feel that I am bringing something positive to young people, and it makes me happy. I am liberated.”

His newfound fame led him to another act of bravery and generosity.

A student who listened to him speak at a Belgian school in 2012 called him soon after with a stunning proposal.

A Belgian man named Koenraad Tinel, an artist of similar age to Gronowski, had written about the guilt of being born into a Nazi family. His brother had been a guard at the Mechelen camp where Gronowski and his mother had been held before being placed on Convoy 20. Would Gronowski meet with him?

The two men, both more than 80 years old at the time, met at the humble offices of the Belgian Union of Progressive Jews.

“This is how our friendship was born,” said Gronowski. “And now Koenraad is more than a friend. He is a brother.”

The two wrote a book, “Finally, Liberated,” and gave lectures together.

When the older Tinel brother, Walter, the camp guard, was on his deathbed, he asked to meet Gronowski and plead for forgiveness.

“I took him in my arms, and I forgave him,” he said. “This forgiveness was a relief for him, but it was an even bigger relief for me.”

As Belgium battles a second coronavirus wave with another lockdown, Gronowski plays his piano with the windows shut this time (“It’s a bit too cold now”) and plots future adventures. “I want to play with this band from New Orleans,” he said, brimming with boyish enthusiasm. “They’re called Tuba Skinny. They’re great!”

Most of his school lectures have been put on hold because of the pandemic, but they’ll restart soon enough, he said, and that’s what he looks forward to the most.

“When I tell my story at schools, I always finish with a message of hope. I always tell them one important thing: I tell them that life is beautiful,” he said. “But it is also a daily struggle.”