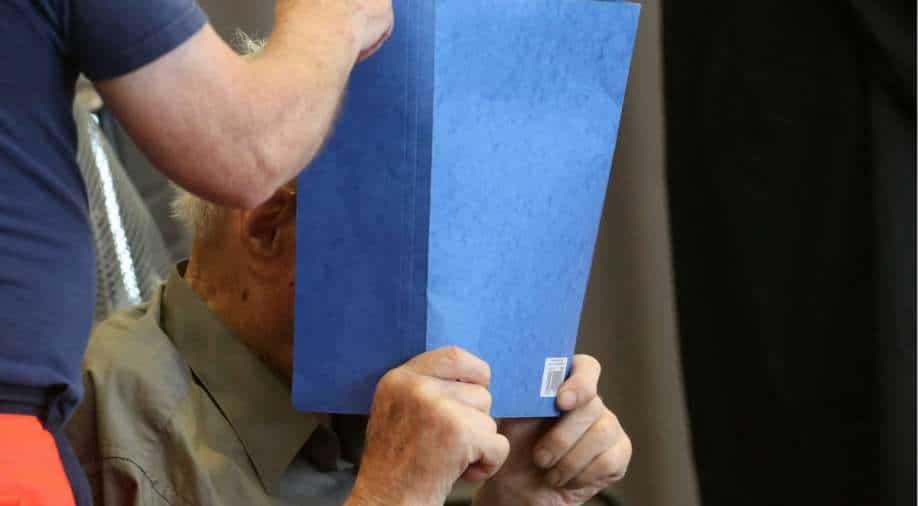 Former Nazi concentration camp guard Josef Schuetz (R) hides his face with a folder as he arrives on June 28, 2022 at a gym used as a makeshift courtroom in Brandenburg an der Havel, eastern Germany, where his verdict was spoken. The court gave its verdict in the trial of the 101-year-old man, the oldest person so far to be charged with complicity in war crimes during the Holocaust. Photograph:( AFP )

Josef Schuetz was found guilty of being an accessory to murder while working as a guard. He was posted at Sachsenhausen camp Oranienburg, north of Berlin between 1942 and 1945, said presiding judge Udo Lechtermann

A court in Germany on Tuesday (June 28) handed a five-year jail sentence to a 101-year-old former NAZI concentration camp guard. Josef Shuetz, the former guard is the oldest person to go on trial for war crimes during the Holocaust.

Schuetz was found guilty of being an accessory to murder while working as a guard. He was posted at Sachsenhausen camp Oranienburg, north of Berlin between 1942 and 1945, said presiding judge Udo Lechtermann.

Schuetz is now a pensioner and lives in Brandenburg state. He had pleaded innocent to the charges against him. He said he did "absolutely nothing" and was not aware of the gruesome crimes being carried out at the camp.

"I don't know why I am here," he said at the close of his trial on Monday.

But prosecutors said he "knowingly and willingly" participated in the murders of 3,518 prisoners at the camp and called for him to be punished with five years behind bars.

More than 200,000 people, including Jews, Roma, regime opponents and gay people, were detained at the Sachsenhausen camp between 1936 and 1945.

Labour, murder, medical experiments, hunger or disease claimed ten of thousands of live before liberationk of the camp by Soviet troops.

Prosecutors said Schuetz had aided and abetted the "execution by firing squad of Soviet prisoners of war in 1942" and the murder of prisoners "using the poisonous gas Zyklon B".