Watch | 'On top of the world': Emirates' viral ad on top of Burj Khalifa is not fake, was shot with single drone 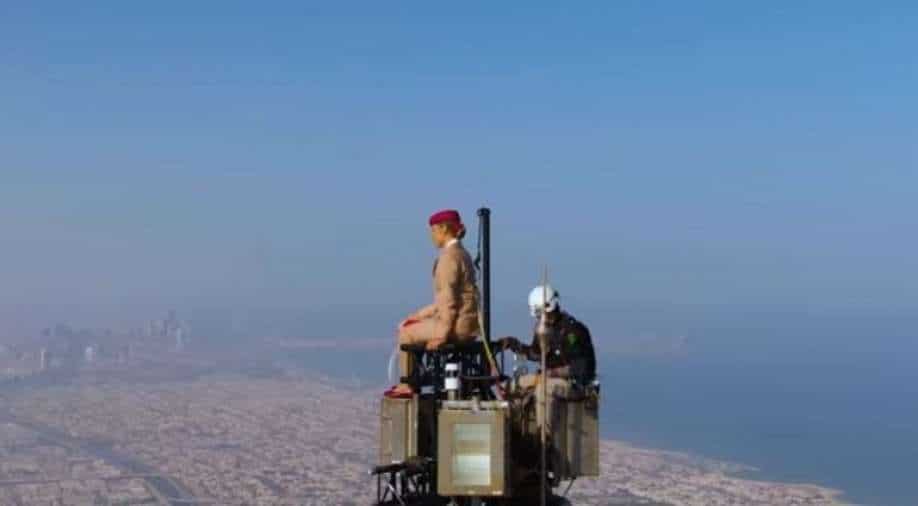 Emirates Airline helicoptered a cabin crew member to the top of Burj Khalifa to shoot a commercial to celebrate the UK's shifting of UAE from the red list to amber list. Photograph:( Twitter )

At 828 metres above ground, this marks one of the highest-ever filming locations for an ad. A single drone was used to capture the footage in a continuous take to film the complete sequence.

A commercial from the UAE's airline Emirates, which depicts a cabin staff member in full uniform standing atop the Burj Khalifa's tallest point, was shot without the use of a green screen or special effects, according to the carrier.

This commercial, which has gone viral on social media last week, features UK stuntwoman Nicole Smith-Ludvik. The professional skydiving instructor has joined an exclusive group of people who have stepped atop the world's highest skyscraper, which stands at 828 metres.

She plays an air hostess dressed in Emirates' cabin crew outfit, standing atop the pinnacle of the building, holding plaque cards expressing the airline's gratitude for being removed off the red list of UK's international travel curbs.

Reconnect with your loved ones or take a fabulous vacation.
From 8th August travel to the UK gets easier.#FlyEmiratesFlyBetter pic.twitter.com/pEB2qH6Vyo

The commercial garnered a lot of positive feedback from people around the world. Netizens were stunned, and they couldn't believe what they were seeing.

In response to several questions on how it was really made, Emirates on Monday published a behind-the-scenes video of the commercial, confirming that Smith-Ludvik did indeed stand atop the Burj Khalifa for the commercial.

A single drone was used to capture the footage in a continuous take to film the complete sequence.

Behind the scenes video:

Real or fake? A lot of you have asked this question and we’re here to answer it.
Here’s how we made it to the top of the world’s tallest building, the @BurjKhalifa. https://t.co/AGLzMkjDON@EmaarDubai #FlyEmiratesFlyBetter pic.twitter.com/h5TefNQGQe

In the video, Smith-Ludvik, dressed in full Emirates crew attire, says, "Hi mommy, I'm on top of the world."

"Filming at the pinnacle required rigorous preparation and adherence to a stringent safety protocol," the new film adds, as it shows Smith-Ludvik practising the feat in a warehouse.