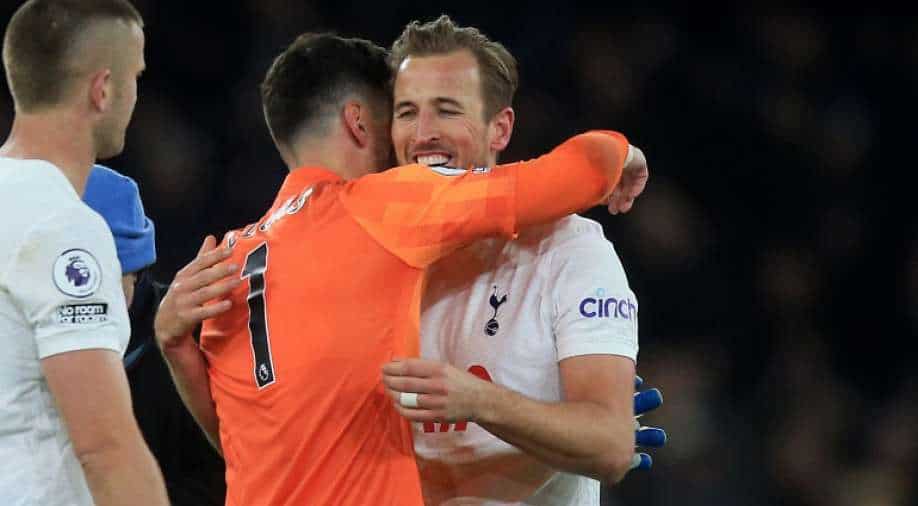 Antonio Conte praised his Tottenham Hotspur side's ability to turn defence into attack as they shrugged off a dreadful recent run to stun Premier League leaders Manchester City with a Harry Kane-inspired 3-2 win at the Etihad Stadium on Saturday.

After three successive league defeats, Tottenham's top-four ambitions were fading and Conte's honeymoon period since taking charge in November was well and truly over.

But the Italian, who has been under the spotlight all week after an interview in which he appeared to suggest Tottenham had been left weakened in the transfer window, masterminded the "perfect game" to stop the Man City juggernaut.

Tottenham only had 28% of possession against City, but defended diligently and somehow always looked a threat on the counter-attack with Kane, who scored twice including the 96th minute winner, linking superbly with Son Heung-min.

City had made it 2-2 in stoppage time through Riyad Mahrez's penalty, and it looked likely that the leaders would even snatch a last-gasp win, but Tottenham had other ideas as they revived their hopes of challenging for the top four.

"You know when you play Manchester City you will concede 70% of possession. But I say to my players that when you are defending, in your mind you must always be attacking. In your mind you want to win the ball and attack," Conte, who had not lost three league games in a row as manager for 12 years, said.

"To have this thought, in the final minutes, their goal could have killed you. Instead my players wanted to win.

"I think in every moment of the game my team wanted to attack them. Every time we had the ball I was thinking we could hurt them."

ALSO READ: Harry Maguire responds to reports of power struggle between him and Cristiano Ronaldo at Man Utd

The surprise win lifted Tottenham back into seventh spot and with games in hand over the likes of West Ham United and Manchester United, they are back in the hunt for the top four.

But Conte knows that one big result will be pointless unless they can produce a much higher level of consistency.

"This win has to give us confidence, to trust the work we are doing together," the former Juventus, Chelsea and Inter Milan boss said. "But this is a process."

But it was the old combo of Kane and Son Heung-min which really tormented City. Son set up Kane's first goal, the 36th time they have combined for a Premier League goal, equalling the record of Didier Drogba and Frank Lampard for Chelsea.

ALSO READ: Out of all the problems I have, the smallest one is Man City, says Liverpool manager Jurgen Klopp

"To speak about only one player is difficult for me. They made a fantastic performance," Conte said.

"Sonny was fantastic today. Harry I think to speak about performance of Harry what I have to tell, he was outstanding, but the two midfielders, the defensive line, the keeper, the players who came in from the bench.

"When you win against Manchester City, you've played a perfect game."