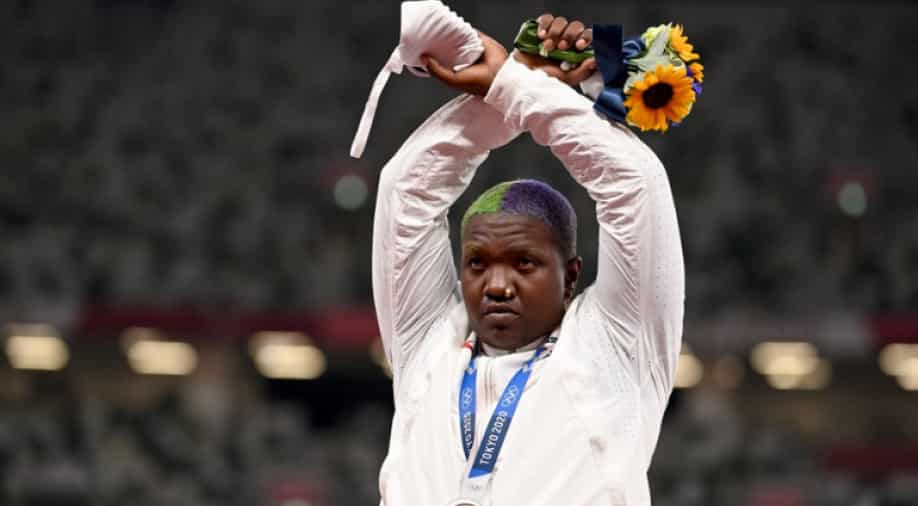 The Olympics boycotts political proclamations during rivalry or on the podium, setting up a likely clash between the competitor and donning specialists.

Raven Saunders, American shot-putter not just won a silver award on Sunday, she stopped an extremely open dissent: bringing her arms up in a striking "X" shape on the podium.

When she was asked about what the signal implied, she clarified, it was intended to address the 'intersection of where all people who are oppressed meet and it's the convergence of where all individuals who are abused meet."

The Olympics boycotts political proclamations during rivalry or on the podium, setting up a likely clash between the competitor and donning specialists.

She later addressed reporters about how significant the success was for her, having battled with monetary difficulty and despondency. Raven Saunders, a local of South Carolina and who is transparently gay, said her success was about far beyond herself.

“I feel amazing, because I know I'm going to inspire so many people,” she said.

“About to inspire so many young girls, so many young boys, so many LGBTQ people, people who have battled suicide. So many people would have almost given up it's not, it's not just about me,” she added.

Raven Saunders is also known as "Hulk," and went onto the field Sunday with purple and green hair. She additionally enchanted fans by dancing after her win.

She broke down during her interview after the success depicting her excursion to Tokyo following quite a while of battling with emotional well-being issues.

“Everything I've been through these past five years has been crazy. I remember so many times sitting in my car, crying not knowing how I was gonna pay my bills. Not knowing if I was going to be healthy, but I gave it everything I had,” she said.

The gesture was probable disregarding the Olympic sanction, which added a standard against shows in 1975. It's indistinct what outcomes might be forced by the International Olympic Committee.