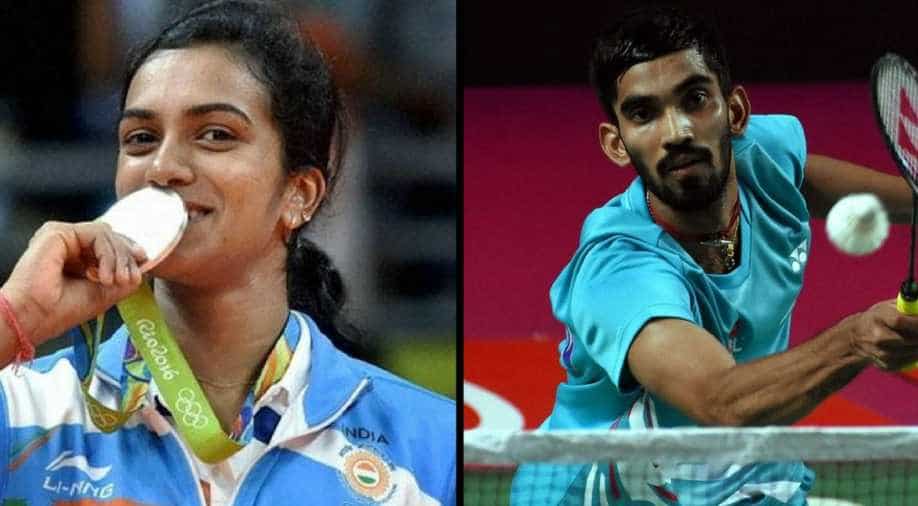 India's formidable duo of PV Sindhu and Kidambi Srikanth will have no dearth of motivation as they aim to win the coveted All England Championships starting tomorrow -- something their mentor P Gopichand won 17 summers back.

The All England Championship is considered to be the ultimate glory for any shuttler worth his salt and in India, only Prakash Padukone (1980) and Gopichand (2001) earned their rights to stand on the victory podium.

Sindhu and Srikanth are expected to have easy first round outings against relatively unheralded opponents but the road is tricky for former finalist Saina Nehwal, who will face none other than world No 1 and defending champion Tai Tzu Ying of Chinese Taipei in the lung opener.

Tai Tzu has proved to be her nemesis with an overall 9-5 record against her. The Indian has lost the last seven outings, the most recent being at the Indonesia Masters final early in the year.
Fourth seed Sindhu, on the other hand, would open her campaign against a relatively unknown Thail shuttler Pornpawee Chochuwong in the opening round but could face her India Open conqueror Beiwen Zhang in the next.

Srikanth, meanwhile, seems to have an easy opening round against Frenchman Brice Leverdez.

The Indian badminton is going through a golden period with a clutch of world-class performers in its ranks, courtesy Gopichand.

Among his disciples, London Olympics bronze medallist Nehwal came agonisingly close losing the final to Carolina Marin in 2015 while Sindhu's quarter-final finish in 2017 has been her best shot in the Championships so far.

Men's world no 3 Srikanth enjoyed a fabulous 2017, where he won four Super Series title and is certainly one of the contenders in the men's section alongside Danish world No 1 Viktor Axelsen and Malaysian legend Lee Chong Wei.

Srikanth had crashed out in the opening round last year and would like to turn the tables this time around.

Given the tricky nature of the draw at the USD 1000,000 blue-riband event, which boosts of a star-studded field, it will take a consistent top-class performance for successive five days to bag a gold this week and the Indian trio will have their task cut out.

When Saina was asked about facing world No 1 in the first round, she said: "Tai Tzu has won a number of tournaments last year, so it is not only the Indians who are losing to her.

She is the best player right now, she is tricky, she is very focused but it is not that we can't beat her.

"We will have to figure out a way to beat her. I think it is a matter of time," the world No 11 had exuded confidence during a recent interaction.

For Sindhu, it will be about setting the record straight against Zhang, who beat her at the Indian Open.

"I have six weeks of training under my belt and I hope I do well at All England Championships. There are many tournaments this year, So I just hope that I give my best and play my game,? the Rio Olympic silver medallist said.

The immensely talented Srikanth will like to keep the guard up as the French shuttler has a good defensive game, which enabled him to dispatch former world No 1 Lee Chong Wei in the first round at last year's World Championship.

"The All England is one most prestigious events because it has a history of 100 years attached to it. Prakash sir and Gopichand sir have done extremely well at the All England.

They will always be a source of inspiration for us. I would say winning these tournaments, will definitely give the player legendary status,? said the world no 3 Indian.

Among others, Singapore Open champion Sai Praneeth and world no 12 H S Prannoy are the dark horses and can upstage even the best in business on their given day.

While Praneeth will take on former world number on Son Wan Ho of Korea, an opponent he has not beaten yet, in the opening round, Prannoy, who recovered from a foot infection a few weeks back, is drawn to take on eighth seed Chou Tien Chen of Chinese Taipei.
"I hardly had two weeks of training because of warts in my foot. So not expecting much. I am mentally fresh and I would look to regain my form here," Prannoy said.

If they clear the first hurdle, they are likely to face second seeds Mathias Boe and Carsten Mogensen of Denmark in the second round.

Manu Attri and B Sumeeth Reddy will clash with Marcus Ellis and Chris Langridge in the opening round, while women's doubles pair of Ashwini Ponnappa and N Sikki Reddy will face second seeds Japanese combo of Misaki Matsumo and Ayaka Takahashi.

Mixed doubles combo of Pranaav Jerry Chopra and Sikki will square off against German pair of Marvin Emil Seidel and Linda Efler.

Slammed by most of the top players and coaches, the controversial service rule? which says a shuttlecock shall be held less than 1.15 metres (3.8 feet) from a court's surface before serving? will also be tried out at the All England Open.

The Indian shuttlers had some useful sessions with technical official Vemuri Sudha Kar ahead of the tournament to tackle the rule, it would be interesting to see how shuttler worldwide deal with it during the week.