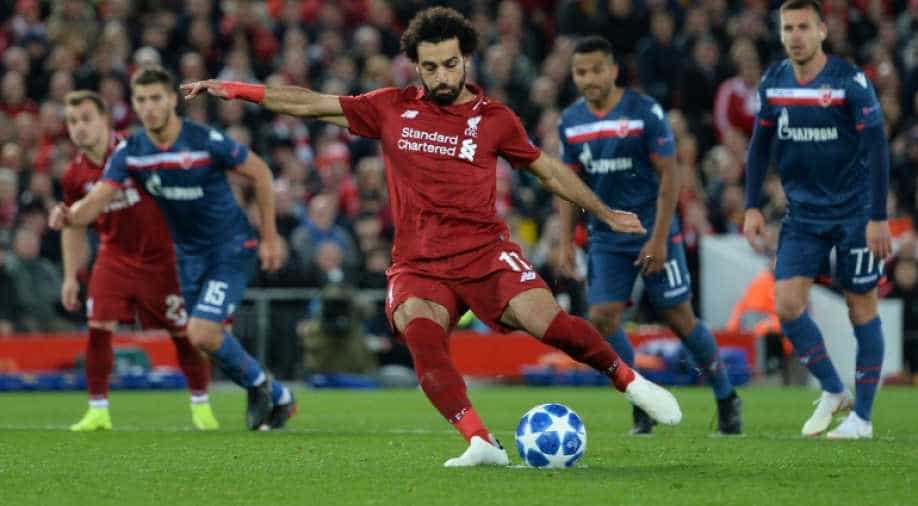 Liverpool defeated Belgrade 4-0 in Champions League Group C at Anfield to get their last-16 hopes back on track.

Mohamed Salah scored twice on a record-breaking night as Liverpool beat Red Star Belgrade 4-0 in Champions League Group C at Anfield on Wednesday to get their last-16 hopes back on track.

After their defeat at Napoli in their previous game, Juergen Klopp's side bounced back with his attacking trio again all delivering as Salah made it 50 goals for the club while Roberto Firmino and Sadio Mane also both hit the target.

Egyptian Salah appeared to be rediscovering his deadly form of last season as he reached his half-century quicker than any Liverpool player in history, achieving the feat in 65 games -- 12 quicker than the previous record holder Albert Stubbins.

Red Star, beaten 6-1 by Paris St Germain in their last outing and without away support as the club served the second of a two-match ban on travelling fans, posed little threat in a subdued atmosphere.

Yet Liverpool were still able to produce enough quality to comfortably pick up the three points and, with PSG and Napoli drawing 2-2, they now top the group with six points, one more than Napoli and two ahead of the French champions.

"When the game calmed down we played football and created chances - it was a really good game and I enjoyed it a lot," said Klopp.

"It was a good football game and a deserved win."

Firmino set Liverpool, beaten at Napoli in their previous game, on their way in the 20th minute with an emphatic finish after a smart pull back from Andy Robertson found the Brazilian in space in the box.

Swiss international Xherdan Shaqiri, busy and creative throughout, fed Salah for Liverpool's second on the stroke of halftime, the Egyptian firing home from inside the box.

Red Star had threatened little and Liverpool put the game beyond them six minutes after the interval when Filip Stojkovic stuck out an arm to block Mane and Salah blasted home the penalty for his landmark goal.

There has been talk of Salah struggling for form this season and while he still looks a little short of full sharpness, six goals in 13 games in all competitions is no mean return.

Mane then missed another penalty, his shot pushed on to the bar by Red Star keeper Milan Borjan, before making amends with a close-range finish in the 80th minute.

Substitute Adam Lallana could have made it five when he burst through alone from the halfway line but Canada international Borjan denied him.