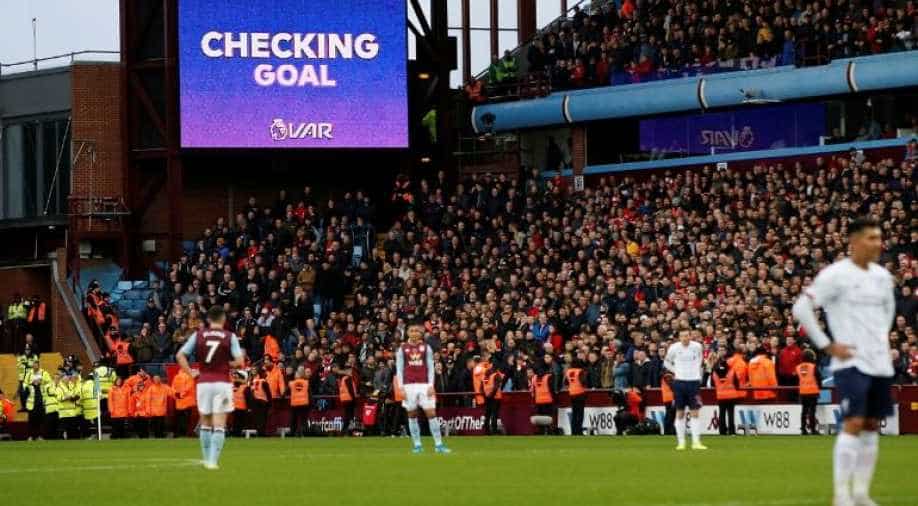 The big-screen displays a VAR review the message before disallowing a goal scored by Liverpool's Roberto Firmino. Photograph:( Reuters )

Firmino's 28th-minute shot would have been an equalizer for Liverpool, who were trailing 1-0 to Aston Villa at the time, but a linesman ruled him offside and VAR confirmed that.

Firmino's 28th-minute shot would have been an equaliser for Liverpool, who were trailing 1-0 to Aston Villa at the time, but a linesman ruled him offside and VAR confirmed that.

"The red line signifies Firmino was aligned to his armpit, which was marginally ahead of the last Villa defender," the Premier League tweeted by way of explanation above a photo with a line perpendicular to the ground going into the Brazilian's armpit.

Liverpool might have been furious at the ruling - had they not scored two late goals to snatch victory.

"We won 2-1, it’s now not that serious," Liverpool manager Juergen Klopp said, adding that his analyst had shown him the incident after the game and he did not see an infraction.

"Sometimes it’s in your favour, and sometimes it’s against you. That's how it is. We have to make sure the new system helps the game and not confuses, that's all."

Villa manager Dean Smith said he thought Firmino was hard done by. "They’ve had the disallowed goal in the first half which I thought was a goal ... We’ve had gnat’s hair goals ruled against us ourselves (in past games)."