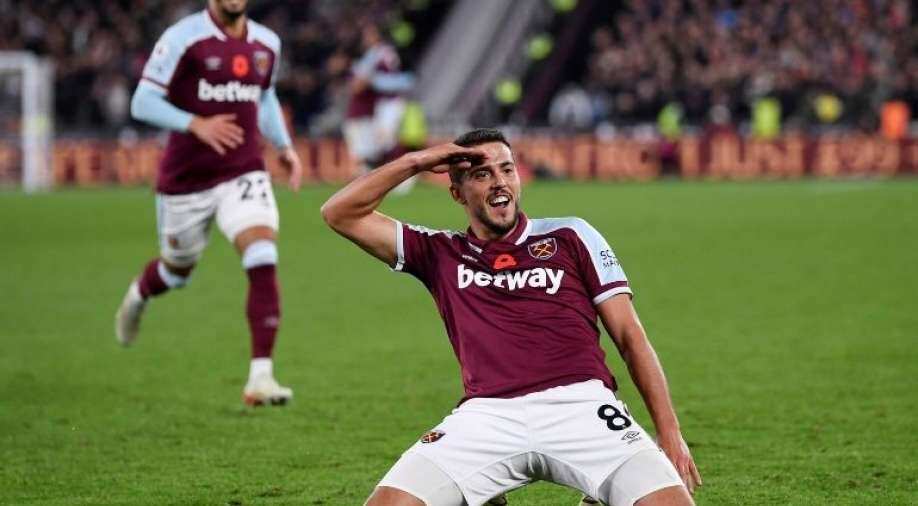 West Ham ended Liverpool's club-record 25-match unbeaten run in all competitions and lifted them above Juergen Klopp`s side into third place in the table.

West Ham United showed that their place in the Premier League's top four was fully warranted as they outmuscled Liverpool for a memorable 3-2 victory at a rocking London Stadium on Sunday.

Victory for high-flying West Ham ended Liverpool`s club record 25-match unbeaten run in all competitions and lifted them above Juergen Klopp`s side into third place in the table.

What always looked like a tough fixture for Liverpool began badly when keeper Alisson, who endured a difficult afternoon, flapped a cross into his own goal after four minutes.

Liverpool were never allowed to find any fluency but they were level by halftime thanks to a moment of magic from Trent Alexander-Arnold.

Those expecting Liverpool to find another gear after the break were left disappointed as West Ham took the game by the scruff of the neck.

Craig Dawson hit the bar for West Ham early in the second half as Liverpool wobbled at the back, before Pablo Fornals restored West Ham`s lead in the 66th minute before Kurt Zouma rose to head in West Ham's third in the 74th minute.

Substitute Divock Origi gave Liverpool a lifeline with a shot on the turn in the 82nd minute and Sadio Mane should have levelled in stoppage time but the hosts clung on for a victory that would be celebrated into the night by the home fans.

West Ham's fourth consecutive league win moves them to 23 points from 11 games with Juergen Klopp's side one point behind them and the Hammers head into the international break just three points behind leaders Chelsea.

It was a day to forget for Liverpool and especially Alisson.

The game was only four minutes old when he flapped at a Fornals corner under pressure from Angelo Ogbonna and the ball ended up in the net. He hoped for a reprieve via a VAR check but the goal was rightly allowed to stand.

Liverpool were ragged and a little lucky not to be down to 10 men after Diogo Jota caught Ogbonna with his elbow, forcing the West Ham player to be substituted.

But they got back into the game when Alexander-Arnold played a short free kick to Mohamed Salah who then stopped it for the English defender to curl past Lukasz Fabianski and temporarily silence the home fans.

Fabianski made a crucial save from Mane`s volley after the break and minutes later West Ham went back ahead as Fornals went clean through and beat Alisson with a low shot that the Brazilian stopper might have saved.

When Zouma headed in shortly after for his first West Ham goal, again with Alisson found wanting, it felt like the roof was coming off the former Olympic Stadium.