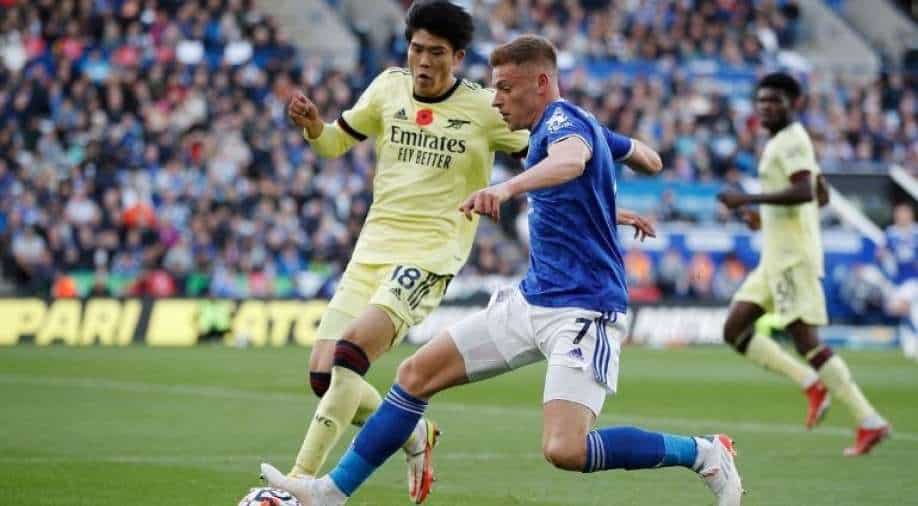 Goalkeeper Aaron Ramsdale was the star of the show as Arsenal made it nine games unbeaten in all competitions with a 2-0 victory at Leicester City in the Premier League on Saturday.

Arsenal have been steadily improving under coach Mikel Arteta after a difficult start to the season, following on from last term's eighth-placed finish.

The victory that kept Arsenal climbing the table on Saturday - they are now up to fifth in the standings with other teams still to play this weekend - came about thanks to the big helping hands of their goalkeeper.

Arsenal flew out of the traps at the King Power Stadium, taking a two-goal lead inside 18 minutes through Brazilian centre Gabriel Magalhaes and livewire Emile Smith Rowe.

Leicester grew into the match after their laboured start and had several chances to get themselves back into the contest before half time, only to find Gunners keeper Ramsdale in inspired form.

Ramsdale's leap to keep James Maddison's free-kick out just before half time was a contender for save of the season, as he clawed the ball away in spectacular fashion to prevent it flying into the top corner.

After the break, Leicester continued to create chances which on another day they would have converted, but Ramsdale refused to be beaten, bailing his side out time and again to ensure a vital victory on Arsenal's road to recovery.

A seventh win in that unbeaten run of nine means Arsenal climbed above Leicester who drop to 10th, with their inconsistent form this term hurting them.

"It is a superb result away from home against a top team," Ramsdale told BT Sport. "We started really well and got two good goals.

"Thankfully it was one of those afternoons that I contributed. We should have had a few more clean sheets (this season) but I'm happy with this one."

The visitors did not have to wait long for the opener, as Gabriel flicked a header home from Bukayo Saka's corner.

Arsenal continued to completely dominate the hosts, who beat Manchester United in their last home league match, and soon enough Smith Rowe latched onto the loose ball to make it two.

Ramsdale's first intervention came in the 29th minute as he sprung to his right to deny Kelechi Iheanacho, before the Arsenal keeper pulled out a stop we will be seeing for years to come from Maddison. He even had the awareness to get to his feet to keep out the rebound as well.

Leicester full back Luke Thomas drilled wide early in the second half as Leicester continued to press, before another brilliant Ramsdale save denied Ademola Lookman.

Ramsdale was then at it again to smother at the feet of Harvey Barnes, as he proved unbeatable.

"Their keeper made a great save but at 2-0 we had to do something in the game," Leicester coach Brendan Rodgers said.

"Second half we were much the better team. The keeper made great saves but you rue the start - that's what cost you. Kasper (Schmeichel) didn't have much to do."

Of the goalkeepers to have faced more than two shots on target this season, only Edouard Mendy (89.7%) is enjoying a higher save percentage than Ramsdale (85.7%), who has saved 24 of the 28 shots on target he has faced.