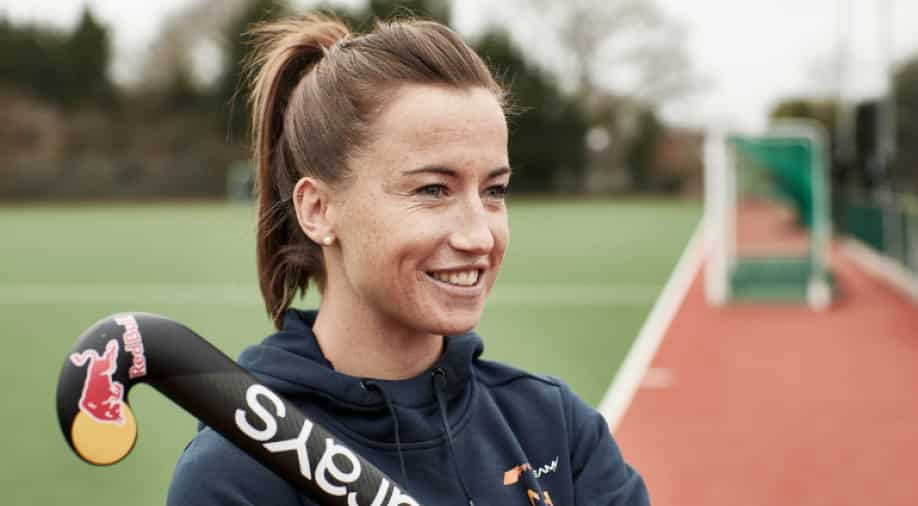 Goalkeeper Maddie Hinch thought she had played her last match for Britain when she stepped away from the international hockey arena in the wake of her gold-medal-winning exploits at the Rio Olympics in 2016.

Goalkeeper Maddie Hinch thought she had played her last match for Britain when she stepped away from the international hockey arena in the wake of her gold-medal-winning exploits at the Rio Olympics in 2016.

Nine weeks before the scheduled start of the delayed Tokyo Games, however, the 32-year-old is back in her familiar role as her country's last line of defence.

Hinch became a household name in 2016, saving all four penalties in an Olympic final shoot-out against the Netherlands.

Two years later she relinquished the jersey and moved to the Netherlands to play club hockey, later saying she had struggled with the self-imposed pressure to perform like a "superhero" every time she put the pads on.

After time out of the spotlight, in 2019 Hinch returned and this weekend keeps the goal for Britain against the U.S. in the FIH Pro League in London as the Games build-up gathers pace.

"Taking a break I knew would put pressure on the shirt, having worked pretty hard to try and get it in the first place," Hinch told Reuters in an interview.

"Once you've got it and you're playing well you have to really play badly to lose it. When I let it go the other two were doing well and I knew if I came back I would have to earn it. It took a while to settle back in and prove to myself that I could still play at that level and still belong."

Hinch said the past year has been an emotional rollercoaster with matches cancelled and little time for team bonding.

To keep herself in shape she has spent hours working out in her garage with gym equipment provided by energy drink company Red Bull, whose stable of international athletes she is part of.

But while the 12-month postponement of the Games because of COVID-19 was frustrating, Hinch says it could benefit herself and a squad that is vastly different to the one that won gold in Rio.

"When it was cancelled it was a bit of a relief," Hinch, who disclosed recently that she was diagnosed with depression, said.

"It may be helped me as I had more time to bed in with the group. We had a new coach, a lot of new faces, so it gave me a bit more time to get more comfortable around the group.

"That took me longer than I anticipated. In that sense, I've been grateful to have the extra year, another year to settle."

Hinch knows Britain will have a target on their backs this time, even if the Dutch are favourites, and says despite Britain being ranked fifth by the FIH, they can defend their title.

She is careful, however, not to predict anything quite as dramatic as what happened in Rio.

"The fashion we did it last time would be hard to top," Hinch said. "That game was ridiculous really. It had everything and the showcase for hockey was amazing. But maybe if we can defend it the feeling would be even better.

"People have written us off but we still have the target on our backs. We are still the team that people will pay attention to. So I think it would be even sweeter to do it again."

Her knowledge of having "been there and done it" will hold the British team in good stead, with Hinch saying that whatever happens in the build-up often goes out the window in the pressure cooker of an Olympic tournament.

"We were seventh in the world before Rio and were bottom of the tournament just before," Hinch, capped 151 times, said.

"But within our bubble, we knew where we were at and where we could be and we brought it together at the right time."

With Hinch between the posts, Britain will have a chance -- and pity, anyone, trying to score a penalty against her.

Unlike soccer, since 2011 hockey's shoot-outs involve a one-on-one in which the outfield player has eight seconds to dribble from the 23-metre line and beat the keeper.

It's a scenario Hinch loves, just ask the Dutch.

"It's a little bit more of a showcase of skill," Hinch, who is launching her own training app for budding keepers, said.

"What I love about it is that it is very much a test of keeping in all aspects, being active, being brave, the mental aspect. I think it's a great way to decide on a game.

"In the old days (of the penalty stroke) you expected the player to score and if they did it's not really on the keeper. Now I back myself to save them."