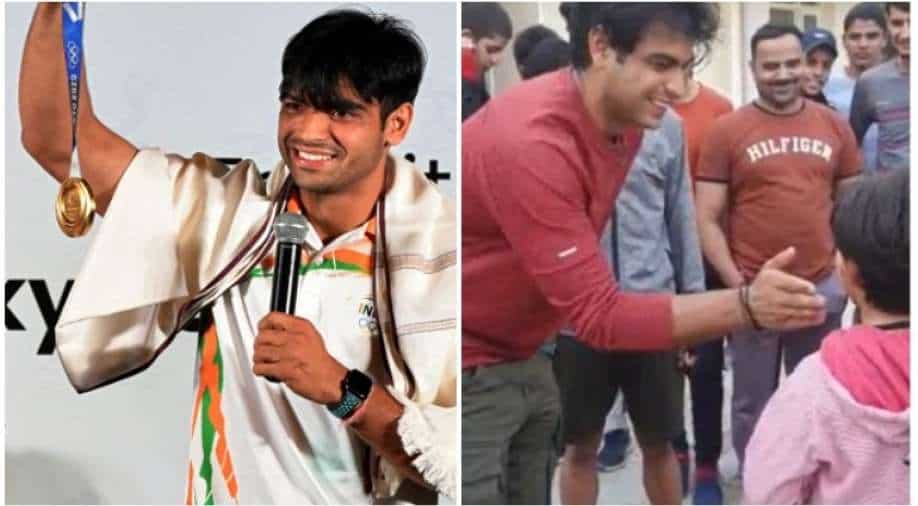 Neeraj Chopra remains the darling of the nation ever since he won India its first-ever gold in athletics during the men's final in javelin in Tokyo 2020. Recently, he had an adorable interaction with a young kid. Here's the video:

Neeraj Chopra became the heartthrob of the nation ever since he won gold for India in the men's javelin final in the Tokyo 2020 Games. It was India's first-ever Olympic medal in athletics and, hence, the 23-year-old has seen his popularity grow to an immense level.

Neeraj also became only the second Indian to win an Olympic gold, after shooter Abhinav Bindra, as he has inspired a generation with many young kids becoming his fan. Recently, Neeraj's interaction with young kids at Panipat Sports Stadium has gone viral on Twitter as well.

During his interaction with one of the kids, a young girl adorably told him that "Mere favourite toh aap hi ho (You are my favourite)". To this, the javelin thrower had one of the most adorable reactions as he gently patted the girl's cheeks before interacting any further. The video of the same was shared by IPS officer Pankaj Nain on social media.

Pankaj Nain lauded Neeraj's personality and the way he interacted with the young girl. He captioned the post, "@Neeraj_chopra1 Look at the simplicity of this man, interacting with kids at Panipat Sports Stadium today . Way to go Champion @dsya_haryana," read the tweet posted by the IPS officer.

Neeraj has come a long way post his Olympic success. The athlete is coming back from a much-needed vacation, in Maldives, and will now look to move past his resounding success and aim for more glory for his country. The challenge for him will be to perform amid huge expectations. Nonetheless, he seems mature enough to handle pressure at such a young age and, hopefully, is destined for more historic triumphs.