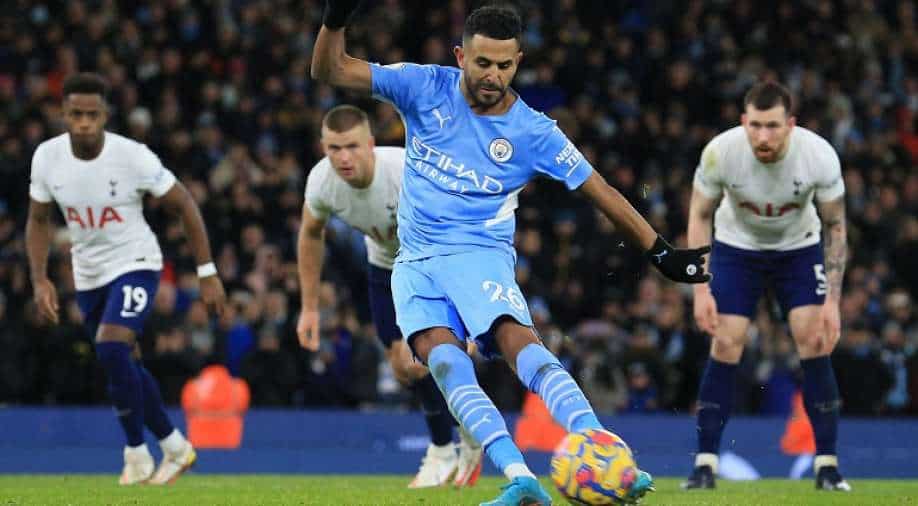 Man City's Mahrez scores their second goal from the penalty spot during the match between City and Spurs. Photograph:( AFP )

Manchester City were defeated by out-of-form Tottenham Hotspur, losing 3-2 at home. On the other hand, Liverpool thrashed Norwich City 3-1.

When a relentless Manchester City pipped Liverpool to claim the Premier League crown in 2019 it was widely regarded as one of the most epic title races in top-flight history.

After a stunning plot twist in the latest round of fixtures, this season's run-in has the potential to be every bit as compelling with City and Liverpool the protagonists again.

When Liverpool stumbled around Christmas, dropping seven points in three games, it looked for all the world as though Pep Guardiola's City were running away with it.

Churning out win after win the champions opened a 12-point lead in January while Liverpool manager Juergen Klopp was having to make do without forward duo Mohamed Salah and Sadio Mane -- both away at the African Cup of Nations.

Liverpool began their game struggling Norwich City on Saturday nine points adrift with a match in hand, but when they still trailed to Joel Matip's fluke own goal with under half an hour left it appeared they were about to suffer a knockout blow.

Mane, Salah and Luis Diaz turned it around, however, and later in the day City were stunned by out-of-form Tottenham Hotspur, losing 3-2 at home -- their first defeat since October ending a run of 14 wins and a draw in 15 games.

"It looks like we could have title race" chimed former Liverpool defender Jamie Carragher in his role as Sky Sports pundit. Even with his red-tinted glasses on, he is right.

Liverpool, who have won their last eight games in all competitions, host Leeds United on Wednesday.

Win that and they will be three points behind City with both teams having 12 games left to play.

Throw in the fact that their goal differences are almost identical and that City host Liverpool on April 9, no wonder people are recalling the epic finale to the 2018-19 season.

At the same juncture of that season, Liverpool were leading with 65 points from 26 games, with City on 62.

If Liverpool beat Leeds it will be 63-60 in City's favour.

The Tottenham result was more than likely a blip for City and they will no doubt start compiling another winning run, but Liverpool are building the sort of momentum Guardiola's side enjoyed when winning their last 14 games in 2018-19 to claim the title with 98 points to Liverpool's 97.

"Saturday's swing underlines why you can't hand out the Premier League prizes in January or February," former Liverpool midfielder Danny Murphy said in the Mail on Sunday.

"The truth is Manchester City and Liverpool are closely matched so a one-club procession was never on the cards. Either would be worthy champions. It promises to be a fascinating race and the weekend added to the intrigue."

City have arguably the better run-in with a Manchester derby their only other clash against the current top four, although they must also visit West Ham United late in the season.

Liverpool, who have the distraction of the League Cup final this weekend against Chelsea, play Manchester United, West Ham and Arsenal before what could be a seismic title showdown with City on April 9.

Guardiola said this month his team will require close to 100 points to claim a fourth Premier League crown in five seasons, and with Liverpool's title destiny back in their own hands, as it is for City, few would disagree.