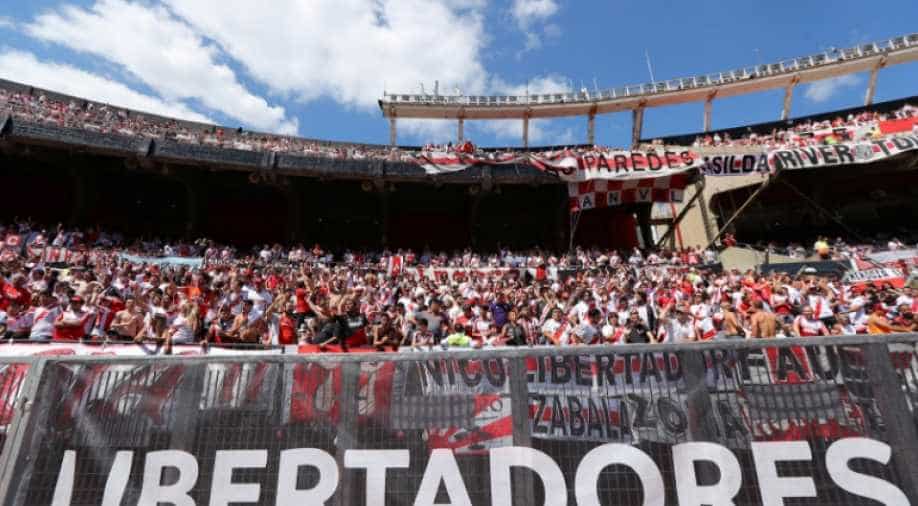 The all-Buenos Aires clash will be remembered for the violence that left players bleeding and almost all the windows on one side of the Boca bus shattered.

The second leg of the Copa Libertadores final was postponed on Saturday after Boca Juniors players were hurt when their bus was attacked by River Plate fans outside the stadium, ruining what was supposed to be a landmark day for Argentine football.

The all-Buenos Aires clash, the first time Argentina's two biggest clubs had met for the title, was billed as the greatest final in the competition's 58-year history but will instead be remembered for the violence that left players bleeding and almost all the windows on one side of the Boca bus shattered.

South American football's governing body (CONMEBOL) twice rescheduled the kick-off in the hope of getting the game played but with a capacity 62,000 crowd waiting for the players to emerge they eventually decided to postpone the final.

The final of the competition, South America's equivalent of Europe's Champions League, was rescheduled for Sunday at 5 p.m. local time (2000 GMT).

However, later on Saturday the city government ordered River's Monumental stadium closed for exceeding capacity limits and failing to keep exits clear, casting doubt on whether the second leg will go ahead on Sunday.

Ricardo Pedace, head of the government's safety agency, told local television they were taking steps to determine whether the game could be played.

"I have asked the inspectors to act quickly, to make it possible for the game to be played," he said.

CONMEBOL did not make an official statement about the postponement. There was also no information on whether fans who had tickets for game would get access on Sunday, or whether CONMEBOL would begin proceedings to punish River for the violence.

The decision to reschedule the game was taken more than two hours after the original start time. Boca players were angry that officials had even tried to get the game underway.

"We're in no condition (to play)," Boca forward Carlos Tevez told reporters shortly before the match was postponed. "They are forcing us to play the game."

Photos showed Boca captain Pablo Perez with his eye bandaged after being taken to hospital and other players suffered cuts to the face, arms, legs and chest.

Local media reported some players were exposed to tear gas after police clashed with the River fans who were throwing stones and missiles at the Boca bus.

"They were throwing pepper gas, stones, everything," Clarin quoted Juan Carlos Crespi, a member of the Boca delegation, as saying.

The first leg at Boca's ground on Nov. 11 ended 2-2 and the second leg was taking place at River's home in front of their own fans. Away supporters are banned from football matches in Argentina due to recurring violence in and around the grounds.

Saturday's trouble comes three years after a Libertadores last-16 tie between the same teams was abandoned at halftime after Boca fans attacked River players with pepper spray in the tunnel.

River were given a bye into the quarter-finals and Boca were kicked out the competition.