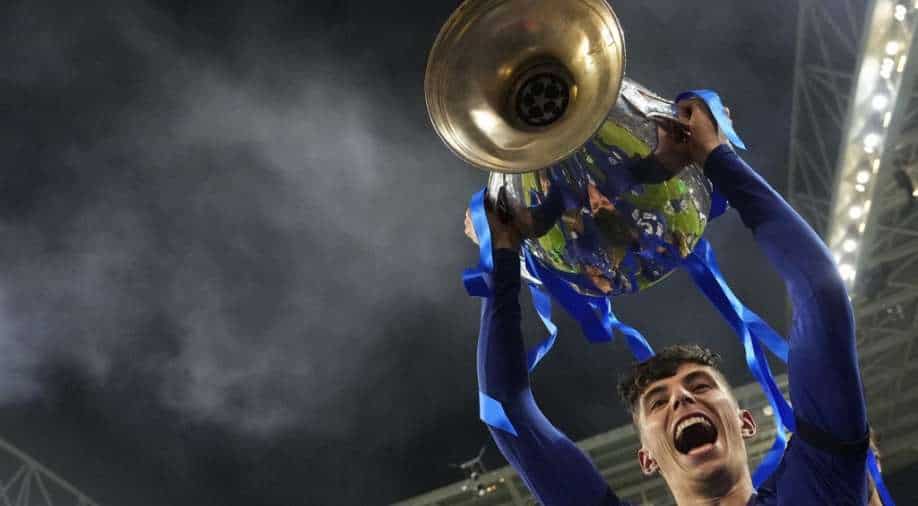 Chelsea fans piled into the streets surrounding the Stamford Bridge ground of the new kings of European football following their 1-0 defeat of Manchester City in the Champions League final on Saturday in Portugal.

Chelsea fans piled into the streets surrounding the Stamford Bridge ground of the new kings of European football following their 1-0 defeat of Manchester City in the Champions League final on Saturday in Portugal.

Some lit flares as they sang and cheered the club's triumph earned thanks to Kai Havertz's first-half goal in Porto.

The goal from the club's most expensive ever signing gave the Russian-owned club their second European crown nine years after the first in 2012.

Many of those who could not be there congregated in the fashionable west London neighbourhood, near the stadium where the same supporters had gathered for an angry protest against Chelsea's shortlived membership of the European Super League in April.

A light show in the club's blue spelled out "Champions for the Fans" as fireworks went off in the distance.

The fans' joyous celebrations, standing shoulder to shoulder in the streets, showed a complete disregard for the present social distancing advice in England that groups of no more than 30 can congregate.

Some climbed up to balconies of houses raising their arms in triumph -- several whipping off their shirts to celebrate half naked on a warm night.

Other Chelsea fans watching the game on giant screens at the Boxpark entertainment complex in Croydon, south of London, erupted in cheers at the final whistle.

"I'm ecstatic. It's amazing, this is something I've felt before, a long time ago, but to re-live it is mad. I'm really happy, I can't believe it," said landscape gardener Aaron Cheneoy, 36.

"Why do we think we've won it? Because we're the best team in Europe! I mean, look what's happened this season, this is the third time we've beaten City," said Bradley Smith, a 25-year-old consultant.

In northwest England, many Manchester City fans congregated in the Townley Pub in the city and experienced a wave of emotions as their team fell short of becoming European champions for the first time.

They drowned their sorrows but with the consolation that Pep Guardiola's team ended the season as runaway Premier League champions and retained the League Cup.

The City fans' emotions went from despair when Havertz scored to anger and despair at the early departure of influential midfielder Kevin De Bruyne after a shuddering clash with Chelsea defender Antonio Rudiger.

"Well, I'm not impressed, but I'm not going to slate my team because at the end of the day, we win everything," one fan said, and couldn't resist a jibe at their city rivals Manchester United.

"Manchester’s still blue, if you don't like it oo…oo."