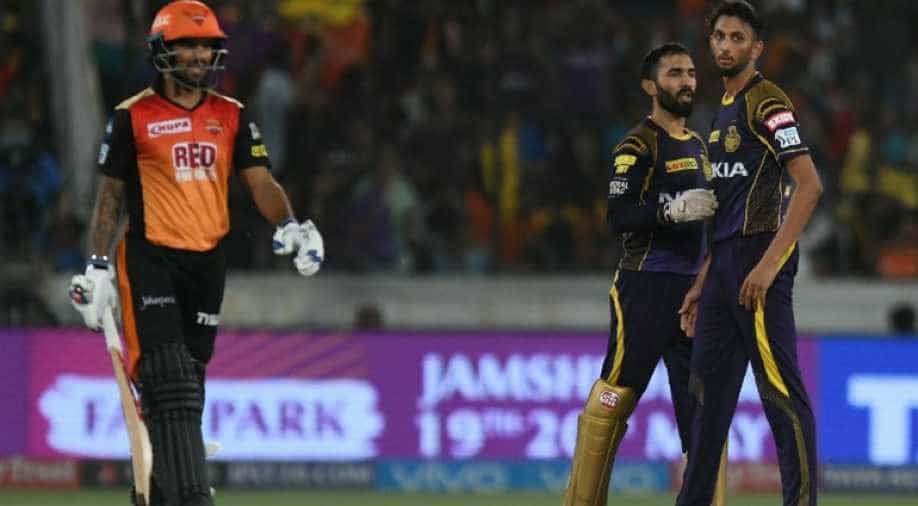 Despite getting a flying start, table-toppers Hyderabad were restricted for mere 172 runs by the Kolkata bowlers at Rajiv Gandhi International Stadium, Hyderabad on Saturday.

Goswami was sent back to the pavilion after making 35 runs off 26 balls.

Dhawan continued the attack to reach his half-century, before being LBW.

Meanwhile, Prasidh Krishna came out as a trump card for Kolkata as he took four crucial wickets to restrict Hyderabad from setting a massive total.

Yadav today turned out to be the costliest player for Kolkata as he gave 35 runs in four overs at an economy of 8.75.

Hyderabad won the toss and opted to bat at Rajiv Gandhi International Stadium on Saturday.

After winning the toss Hyderabad skipper Kane Williamson highlighted the quality of pitch and said that it has grass and it will stay the same that is an advantage for the Hyderabad team.

As expected, Basil Thampi has been dropped as his performance in the previous game was very poor.

Bhuvneshwar Kumar and Carlos Brathwaite have been included in the squad for tonight's match at the pace of Alex Hales and Basil Thampi.

On the other hand, Dinesh Karthik mentioned that the pitch might turn a bit and there is only change for Kolkata, Piyush Chawla has replaced Shivam Mavi.

Indian cricketer Taniya Bhatia claims she was robbed at team hotel in London, slams ECB for lack of security