'Goofy' Gauff can't believe who is watching her heroics 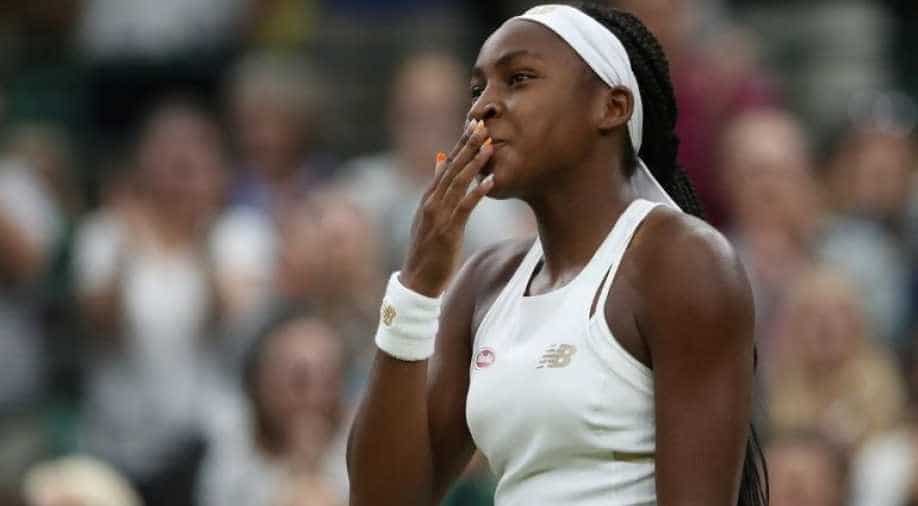 Cori Gauff of the US celebrates winning her second round match against Slovakia's Magdalena Rybarikova. Photograph:( Reuters )

Among the many remarkable things that happened to Cori "Coco" Gauff on Saturday, the 15-year-old actually lost a game of tennis.

But no matter. Being tweeted by Michelle Obama, Jaden Smith and Samuel L Jackson among others more than made up for losing her mixed doubles match with Jay Clarke 6-1, 6-4 to Robert Lindstedt and Jelena Ostapenko.

Gauff, the American teenager who has proved the revelation of Wimbledon's first week by reaching the fourth round of the women's singles, was still pinching herself at her celebrity status. She said she was delighted that her country's former First Lady had tweeted 'Coco is terrific'.

"I was super excited, She's one of my role models. So it was just cool to see that she knows I exist," said Gauff, whose Instagram account showed her clowning round and swooning at news of all her famous backers.

"I saw videos back at home of people screaming after a match. And I saw somebody painted a mural of me in Fort Lauderdale. That was pretty cool."

Asked to describe herself, she came up with the sort of self-deprecating response that explains why she has been such a hit at Wimbledon. "Weird. Weird, goofy, and, I don't know. Yeah, weird and goofy, I guess."

Gauff said she was particularly flattered that singer Jaden, one of her big idols, had noticed.

"I have looked up to Jaden for so long. People who follow me know that's all I post about. I kind of slowed down on it a little bit, but still, it was pretty exciting for me. His new album just came out, as well."

Gauff has enjoyed a life-changing week after beating Venus Williams and 2017 semi-finalist Magdalena Rybarikova and then saving two match points to down Polona Hercog in front of an ecstatic crowd on Friday.

Now she faces her biggest test against former world number one Simona Halep on Monday and the bad news for the Romanian is that she intends to follow exactly the same pre-match routine that has worked so well up to now.

"I think I'm just going to approach her like every other match I have been approaching. My routine has been working pretty well so that's how I'm going to go into the match," she said.

"I like to look at prank videos on YouTube and listen to music. I love music that keeps me calm before matches, because obviously when you get out there there's a lot of nerves anyway. Yeah, I like to find my own space, put some relaxed music on."

Asked if she will feel any different going into the second week of a grand slam, she said: "I don't know. We'll see when I go on the court."