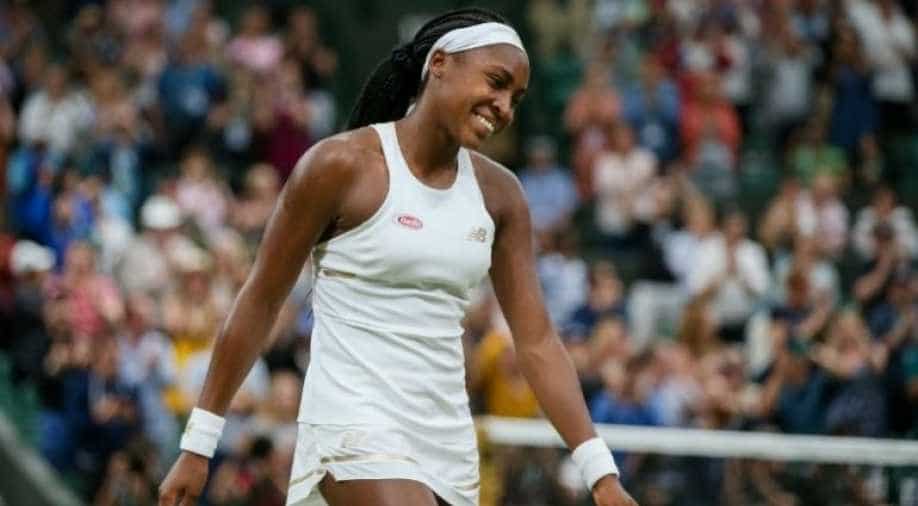 Rybarikova, a semi-finalist in 2017, might have hoped for Gauff's level to dip but it never looked likely as the teenager remained ice cool and composed to close in on victory

American 15-year-old Cori "Coco" Gauff showed her stunning first-round defeat of Venus Williams was no flash in the pan as she outclassed Magdalena Rybarikova 6-3 6-3 to reach the third round of Wimbledon on Wednesday.

Gauff, the youngest player to reach the Wimbledon women's singles main draw via qualifying and the youngest to win a round since 1991, gave the 30-year-old former semi-finalist a torrid time as her fairytale debut continued under the Court One roof.

Gliding effortlessly across the grass she took charge of the match by breaking her 139th-ranked Slovakian's serve to love in the sixth game and was in control thereafter.

Rybarikova, a semi-finalist in 2017, might have hoped for Gauff's level to dip but it never looked likely as the teenager remained ice cool and composed to close in on victory.

Sensational as the victory over her idol and five-time champion Williams was, the way she backed it up was arguably more impressive as she appeared completely impervious to the hullabaloo she has caused at the All England Club.

In two matches she has made 18 unforced errors and barely put a foot wrong.

"I just still can't believe she is 15," American great John McEnroe said in his summary for the BBC.

But even Gauff herself told reporters after the match she was the real deal: "You can kind of fake it till you make it. But I'm not faking it, at least right now."

Incredibly, this time last week Gauff was preparing for a science exam having jetted into London at short notice after being handed a wildcard for the qualifying event.

After a whirlwind week, she now finds herself one win away from becoming the youngest player to reach the fourth round at Wimbledon since Jennifer Capriati, aged 14, in 1990.

After beating Venus, Gauff is already receiving the sort of attention that surrounded Capriati as she burst onto the scene. "I wasn't expecting any of this. A lot of celebrities were DM'ing, posting me. I'm kind of star-struck. It's been hard to reset," she told reporters.

"There's so much going on. I'm still shocked that I'm even here," world number 313 Gauff said after coming off court and being initially told by the reporter she was next to face Caroline Wozniacki when it is actually Slovenian Polona Hercog who beat another former American prodigy Madison Keys.

The way she has taken to the world's biggest tennis stage suggests she might be here a while longer yet.

"This is not the first time she has had to deal with pressure, but she surprises me with some of the fight she comes up with," Gauff's father, and coach, Corey told Reuters.

"My words too her today were just keep it simple and make sure you hit the ball hard, and hit it in the corners," he said.

It took her no time at all to carry out those instructions, ripping a crosscourt backhand winner as she held serve.

Another graceful backhand sealed her next service game and in she raced forward to an attempted drop shot to whip an angled forehand on to the line -- offering a Serena Williams-like "c'mon!!" in response.

Rybarikova, who has dropped to 139th in the rankings, was already beginning to feel the pace and in the sixth game Gauff turned up the dial her groundstrokes to secure the first break.

Serving for the set Gauff crunched two backhand winners on her way to holding to love.

Gauff broke early in the second set and although Rybarikova tried every spin in her armoury to try and break the youngster's rhythm, resistance proved futile.

Asked what advice she had been given by her parents Corey and Candi, who cheered each winner from the players' box, she said it was simple.

"They just told me, you have another match. The tournament's not over," she said. "My goal is to win it," Gauff said.