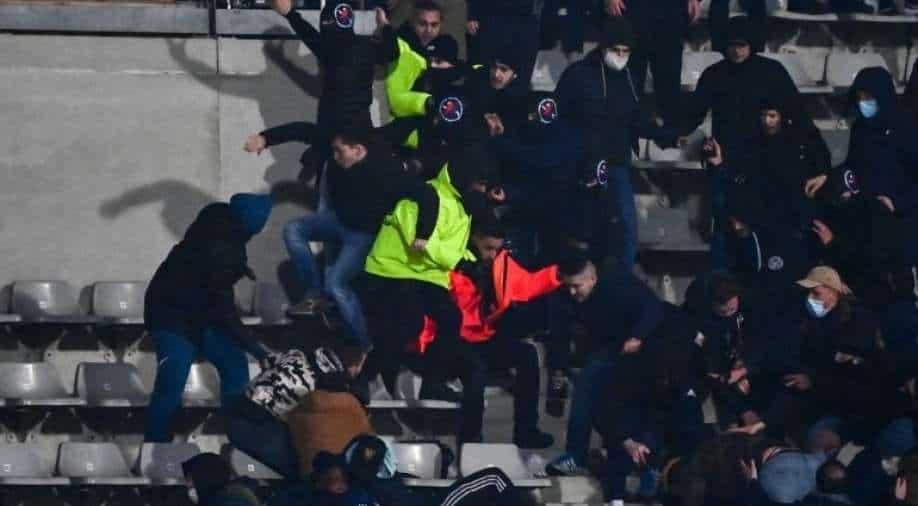 It is the second match this season involving Lyon fans which has had to be abandoned -- their home league game with Marseille was called off after OM captain Dimitri Payet was hit on the head with a plastic bottle.

Paris FC and Lyon were both thrown out of the French Cup on Monday for the hooliganism that forced their December 17 tie to be called off at half-time.

The teams were all square at 1-1 in Paris when fans spilled onto the pitch at Charlety Stadium following incidents in the stands.

Rather than try to finish the match, the disciplinary commission of the French Football Federation (FFF) decided to expel both teams.

The FFF statement said it had "decided that the two clubs are responsible for the incidents that occurred during the match,"  even though the presidents of the two clubs had been blaming each other.

The decisions means Nice, drawn to face the winner of the tie in the next round, go straight through to the last 16.

The commission also fined second-division Paris FC 10,000 euros (11,320 dollars) and Lyon, who have already had a point deducted in Ligue 1 for fan misbehaviour this season, 52,000 euros.

The commission also handed Lyon a suspended ban from the cup and forbidden to take fans to away games in the league for the rest of the season.

Lyon had already announced that they would ban their fan groups from travelling to away matches.

Paris FC will have to play five home matches behind closed doors.

After smoke bombs and flares were thrown back and forth in the stands and fighting broke out fans fled onto the pitch and the  police intervened.

Two people, a supporter and a policeman, were injured.

Although no arrests were made at the time, three fans from Paris were later arrested and two  have been charged.

The incident was the latest in a series at French stadiums this season.

It is the second match this season involving Lyon fans which has had to be abandoned -- their home league game with Marseille was called off after OM captain Dimitri Payet was hit on the head with a plastic bottle.