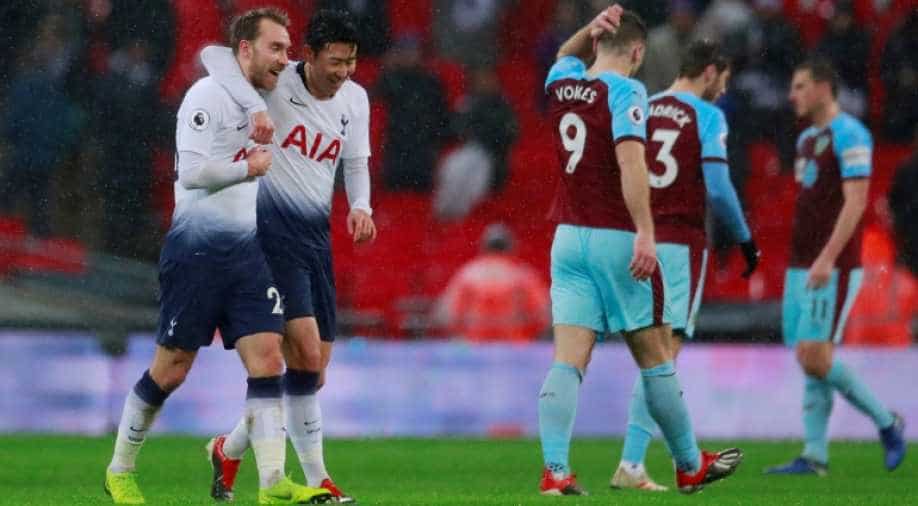 File photo of Tottenham's Christian Eriksen celebrating with Son Heung-min at the end of the match as Burnley's Sam Vokes and teammates look dejected. Photograph:( Reuters )

Liverpool regained top spot in the Premier League with a 3-1 victory over rivals Manchester United on Sunday while Arsenal's unbeaten run came to an end against Southampton.

Liverpool regained top spot in the Premier League with a 3-1 victory over rivals Manchester United on Sunday while Arsenal's unbeaten run came to an end against Southampton. There were also wins for Manchester City, Tottenham Hotspur and Chelsea.

Here are five talking points from the weekend's action:

While much of the focus has been on Manchester United's dire play, it should not be overlooked just how good Juergen Klopp's Liverpool are playing right now.

The unbeaten league leaders had 36 shots on goal and dominated possession throughout the emphatic win, their passing at times seeming to force United's players to twist and contort in circles.

It was the introduction of Xherdan Shaqiri after 70 minutes that really turned the screw, as the Swiss forward showed why he could be the missing piece of the puzzle for Liverpool to go from Champions League runners-up last season to trophy winners.

Southampton's new manager Ralph Hasenhuettl had quite a task to rescue a side without a win since the beginning of September, although he put that to bed quickly with a thrilling 3-2 win over Arsenal on Sunday.

After defeats in his first two games, it was the Austrian's opening match at home that got his Southampton project up and running, as he opted for a 3-4-3 formation made to get the best out of strikers Danny Ings, Stuart Armstrong and Nathan Redmond.

Charlie Austin came on to replace Redmond and grabbed the winner late on to lift Saints out of the bottom three, on goal difference at least.

Perhaps the new manager bounce at St Mary's was not just about what was on the pitch, as Hasenhuettl had sent drinks vouchers to season ticket holders before the game in order to lift spirits.

The story goes that Spurs often crack under pressure. Yet Christian Eriksen's stoppage-time winner against Burnley on Saturday was the fourth time in nine games in all competitions they have scored a decisive goal within the final 10 minutes of a match.

Indeed, the strike was almost identical to the Dane's winning goal against Inter Milan at Wembley last month that rescued their Champions League hopes.

Eriksen and Heung-min Son both came off the bench to help break down a dogged and ultra-defensive Burnley side who had frustrated their more talented opposition.

But Spurs did not panic and, as is becoming part of the narrative now in north London, bided their time to find the crucial breakthrough in manager Mauricio Pochettino's 100th Premier League victory.

Watford and Cardiff City could dominate the goal of the month contenders all on their own after the 3-2 victory by the Hornets at Vicarage Road on Saturday.

But Cardiff manager Neil Warnock was aggrieved at some of the decisions by referee Andrew Madley, who was officiating only his second Premier League game of his career and his first of the season.

"When I've got Andre Marriner (fourth official) beside me and I've got a young referee, first game of the season, I don't understand that at all, me," Warnock said.

"Whether it's because it's only Cardiff City, 'we'll let someone have an experiment today.' We've got one of the best referees (Marriner) at the side of me. I'm flabbergasted."

Warnock's frustrations may hint at a wider problem in the English game, that the level of top-class officials is dropping off and younger blood has to be brought in quickly to fill the widening gaps.

Worries of a growing chasm between the top sides in the Premier League and the rest are highlighted by the fact that only six sides have a positive goal difference while 10 have all conceded more than they have scored.

Bottom side Fulham have already shipped 42 goals, just a few less than the top four, combined, have conceded this season. Not that it is just a problem for Fulham, as the four teams directly above them all have a goal difference of more than minus-10.