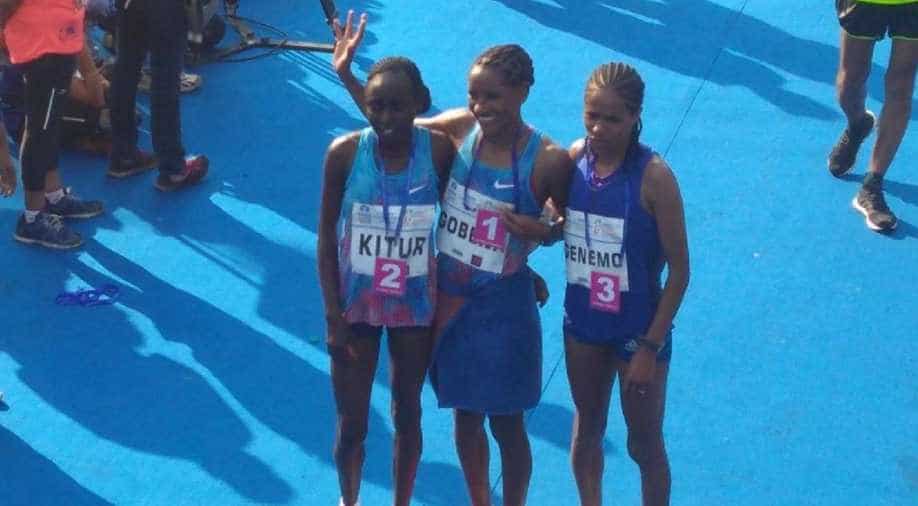 The elite women runners of the Tata Mumbai Marathon today slammed the event organisers, saying there were too many casual runners on the course and that the Metro construction work was also a hindrance.

"It was a quite difficult race as there were a lot of people (casual participants in other non-competitive events) on the road. It was difficult to concentrate," said women's race winner Amane Gobena of Ethiopia at the post-event media conference.

Gobena finished first in 2:25:49 and was well ahead of defending champion Bornes Kitur of Kenya who clocked 2:28:48 to finish second.

She said she missed receiving water thrice the 5, 15 and 30 km marks.

Winner of the International Women’s Elite Category, Amane Gobena says it was quite a difficult race but she’s happy with her display on the track! #TMM2018 #BetterTomorrow pic.twitter.com/rTbqojqJbP

"It was difficult to get water also and there were too many corners (due to construction work for Mumbai Metro-3 line)," she said, about the chaotic manner in which the race was held.

Gobena said she knew that despite the hazards she will win the race just past the halfway mark after taking a clear lead.

"I had prepared very well for the race. We (She and Kitur) were together for the first 25 km, and after 25 km I knew I was going to win," she said.

"At one point I thought I will break the course record, but as I said there were a lot of people (on the road) and temperatures were also rising, So I had to slow down," she further said.

"(Metro) construction work was a problem. The last km was difficult as there were a lot of corners," said the Kenyan runner.

Joshua Kipkorir of Kenya, who finished third in the men's race, criticised the pacemakers for dropping out earlier than expected.

"One pacemaker dropped out at 15km and another at 25km," he said.

Meanwhile, India's Asian champion Gopi Thonakal said he was satisfied with his timing (2:16:51) because of the weather conditions.

"It was hot. I am happy with my timing," said Gopi, who finished 11th overall just ahead of his arch-rival Nitendra Singh Rawat (2:16:54).