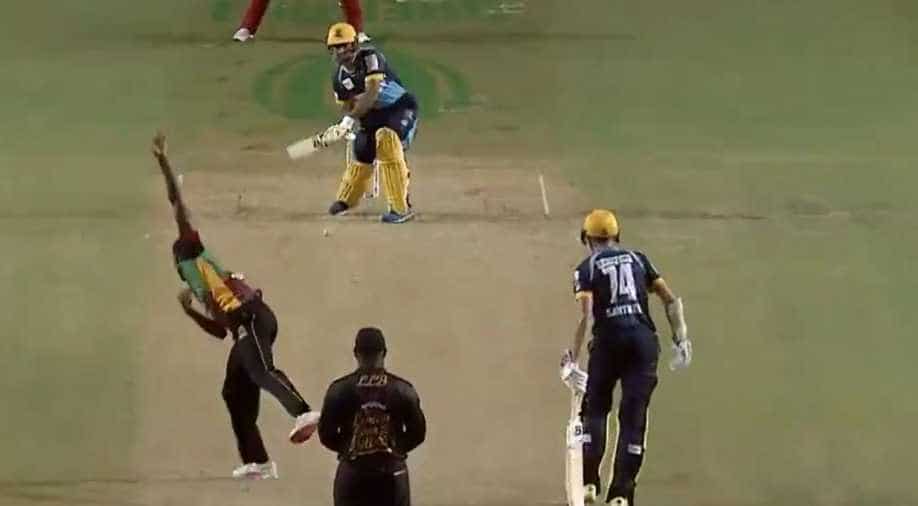 A jaw-dropping Rashid Khan helicopter flick stole the limelight as the Afghanistan spinner smoked 26 not-out off 20 to help Barbados Tridents reach a competitive score of 153-9. Rashid scored just one six in the match but that was arguably the shot of the match and a contender for the shot of the tournament.

Barbados Tridents started their Caribbean Premier League (CPL) 2020 campaign with a victory over St Kitts & Nevis Patriots as they won the match by six runs in what was a proper humdinger at the Brian Lara Stadium, Tarouba in Trinidad.

A jaw-dropping Rashid Khan helicopter flick stole the limelight as the Afghanistan spinner smoked 26 not-out off 20 to help Barbados Tridents reach a competitive score of 153-9. Rashid scored just one six in the match but that was arguably the shot of the match and a contender for the shot of the tournament.

It was a juicy half-volley by St Kitts & Nevis Patriots speedster Alzarri Joseph in around the off-stump but Rashid shuffled a bit to send the helicopter flick over the square-leg boundary to leave everyone watching in awe. The commentators couldn’t believe what they saw as the Afghanistan cricketer enjoyed a prolific outing with the willow before wreaking havoc with the ball.

Here's how others reacted to Rashid Khan six in CPL T20:

Barbados Tridents' Rashid Khan hit this ⚡️ six off the first ball he faced in #CPL20.pic.twitter.com/ykGCSlmCK2

this was his first ball of professional cricket in what..months? golf lessons must have come in handy https://t.co/HPgImnPcZ6

What a shot that is. Always thought Rashid Khan would be a prime candidate if someone wanted to try to replicate what Sunil Narine has becoming at the top of the order... https://t.co/xfay7me5iQ

Rashid went on to pick up a couple of wickets in his four-over quota while giving away just 27 runs as he continued to cement his legacy as the most valuable player in the T20 arena.

Captain Jason Holder was all praise for Rashid and Hayden who built a solid partnership for the last wicket to pile up some crucial runs for the Barbados Tridents in CPL 2020.

“It was important to win this game. It is important to start the tournament well. We were five down before 10 overs and every time we tried to get momentum, we lost a wicket. The partnership between Rashid and Hayden was outstanding to get us to a competitive total. It was a bit easier for the seamers but we had quality spinners in Santner and Rashid. The bowlers have been the beauty to our success and it is good to see they have continued from last year. Our batting could have been a lot better. The top three didn't contribute much but we still managed to get 150,” Barbados Tridents skipper Jason Holder said in the post-match presentation.