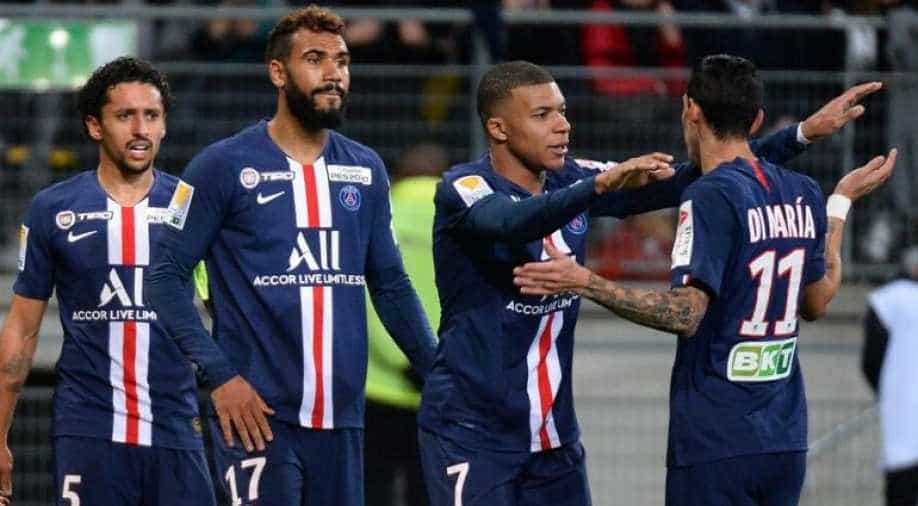 Four players were on the score-sheet for PSG Photograph:( AFP )

Four months behind schedule because of the coronavirus pandemic, the Champions League has reached the quarter-final stage with Paris Saint-Germain taking on outsiders Atalanta in Lisbon on Wednesday in the first game of the 'Final Eight'.

Four months behind schedule because of the coronavirus pandemic, the Champions League has reached the quarter-final stage with Paris Saint-Germain taking on outsiders Atalanta in Lisbon on Wednesday in the first game of the 'Final Eight'.

A straight knockout final tournament held in one place, akin to a World Cup or European Championship, was the only solution available to UEFA in order to complete its most lucrative club competition, suspended for five months from March until last weekend.

Two-legged quarter-finals and semi-finals have been done away with, and all eight teams have come to Lisbon, where they are following strict health guidelines including regular testing. No spectators are allowed inside stadiums.

PSG will therefore meet Atalanta at an empty Estadio da Luz on Wednesday at 1900 GMT, with the winners advancing to a semi-final against either Atletico Madrid or RB Leipzig, who play on Thursday.

The other quarter-finals are Barcelona against Bayern Munich -- the only clubs still in the competition to have won it before -- and Manchester City against Lyon.

The final will be on August 23, and UEFA can only hope there is no widespread outbreak of COVID-19 among any of the teams which could threaten the tournament.

European football's governing body has said that as long as a team has 13 healthy players including a goalkeeper, matches must go ahead, otherwise teams risk forfeiting matches.

There was a scare at the weekend when it was revealed two Atletico players had tested positive, but their squad has travelled to Portugal and their game is set to go ahead.

Before that match, PSG will look to reach the semi-finals for the first time since the Qatari takeover almost a decade ago and they were given a boost on the eve of their match against Atalanta as Kylian Mbappe was declared fit enough to play a part by coach Thomas Tuchel.

"If he trains well on Tuesday evening and nothing extraordinary happens, he will be in the team on Wednesday," Tuchel said.

Mbappe was left in a race against time to be fit for the start of the 'Final Eight' after suffering a sprained ankle in PSG's French Cup final win over Saint-Etienne on July 24.

Opponents Atalanta -- with an annual wage bill for their entire squad believed to be equivalent to Neymar's salary for the year at PSG -- are in the Champions League for the first time.

The Italians are fresh from finishing third in Serie A and are spurred on by the terrible suffering of their home city of Bergamo at the peak of the pandemic earlier this year.

"There is extra motivation for us after what has happened. We have to represent our city in the best possible way and give the people something to smile about," said the Atalanta coach, Gian Piero Gasperini, on Tuesday.

The final of this season's Champions League was initially due to be played in Istanbul in late May before it was postponed and this new format introduced.

Usually such an event would see a huge influx of foreign fans but the atmosphere in Lisbon this time is rather different, even if some supporters have travelled and one study has estimated 16,000 will come in total over the next 10 days.

"The atmosphere is bizarre. The city seems empty and the bars close early," one Atalanta fan, who plans to watch the match in a bar, told AFP.

Restrictions remain in place in and around Lisbon in an attempt to stop a resurgence of the virus.

Those include limiting gatherings to no more than 10 people and banning alcohol consumption in public, while shops and cafes must close at 8:00pm, the time matches will kick off.