Boca Juniors land in Madrid amid tight security for Libertadores 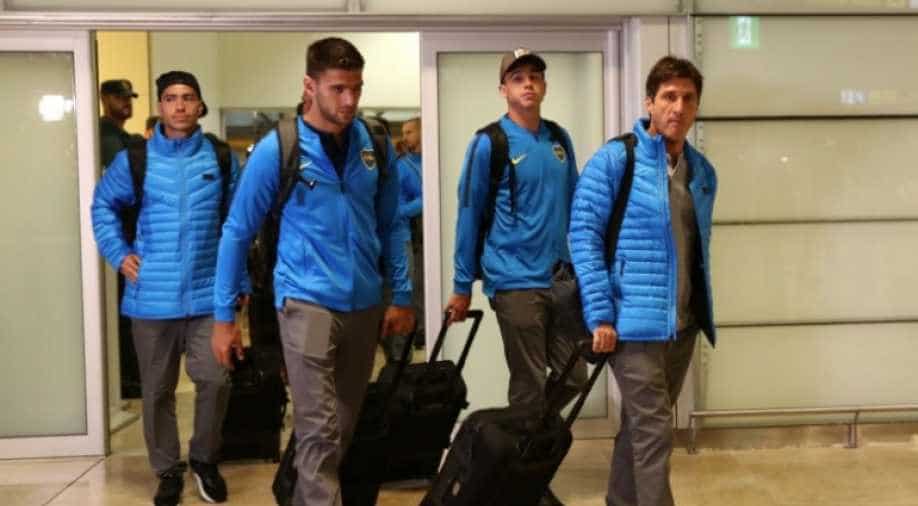 With the potential arrival of tens of thousands more Argentines living in Europe, Spanish police have described it as the highest risk match in Madrid's history.

Boca Juniors landed in Madrid on Wednesday as they prepare to face fellow Argentine club and their biggest rivals River Plate in the Copa Libertadores final second leg amid the biggest security operation for a match the city has mounted.

A noisy caravan of around 5,000 Boca supporters accompanied the team bus in the early hours of the morning as it headed from their Bombonera stadium to Buenos Aires airport.

An estimated 10,000 fans in total from both teams are expected to travel from Argentina for the twice postponed and then relocated game now being played on Sunday at Real Madrid's Bernabeu stadium during a holiday weekend in Spain's capital.

With the potential arrival of tens of thousands more Argentines living in Europe, Spanish police have described it as the highest risk match in Madrid's history.

More than 2,500 officers are expected to be on duty for the 'Superclasico', one of the world's fiercest soccer rivalries. Police have also asked for support from Argentine security.

River Plate will leave Argentina at 1700 GMT and are set to land early on Thursday morning in Madrid.

The teams drew 2-2 in the first leg at Boca's ground but the second leg, originally scheduled to take place in Buenos Aires on Nov. 24, was twice postponed after River supporters attacked Boca's team bus outside the Monumental Stadium.

Boca players sustained injuries after rocks were thrown and at the bus and pepper spray was used. The South American soccer confederation (CONMEBOL) switched the match to Madrid after initially arranging for it to take place at River one day later.

Madrid's Paseo de la Castellana, one of the city's main roads, will be cut off from 9 am local time (0800 GMT) on Sunday as police divide the two groups of fans to prevent violence.

Supporters will arrive on club specific flights and be taken on buses to their respective fan zones after they arrive at Adolfo Suarez Madrid Barajas airport.

Although each of the finalists will get 25,000 tickets for the game, they are only permitted to sell 5,000 to supporters living in Argentina in a bid to stop the notoriously violent 'barra brava' ultras from travelling to the game.

Police have arrested one of the fans they said took part in the Nov. 24 attack and others have been identified and are being sought, Argentine law enforcement officials said on Wednesday.

River said they had suspended the man, who is a club member, and would seek to ban him from future matches.