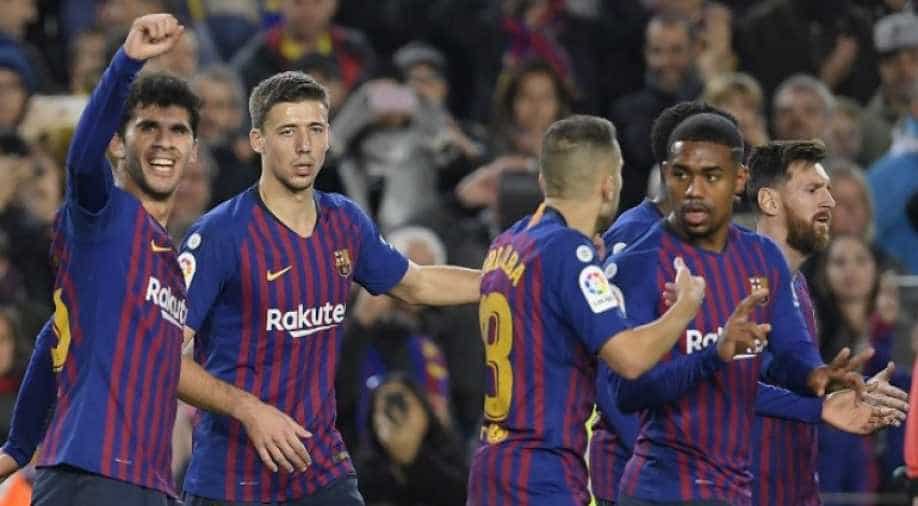 A narrow victory puts Barca back at the top, in front of Sevilla and Atletico Madrid, who were each held to 1-1 draws earlier on Sunday, away to Alaves and Girona respectively.

Ousmane Dembele took another step on the road to redemption as Barcelona eased past Villarreal on Sunday to move back to the top of La Liga.

Dembele, dropped last month by coach Ernesto Valverde, was making his second consecutive start and repaid the faith by teeing up Gerard Pique's opening goal in a comfortable 2-0 win at the Camp Nou.

Carles Alena, the 20-year-old Spaniard also regarded as a star of the future, came off the bench to add a late flourish, chipping in his first La Liga goal and Barca's second after a defence-splitting pass from Lionel Messi.

"Alena has earned his step up to the first team," Valverde said.

A narrow victory puts Barca back at the top, in front of Sevilla and Atletico Madrid, who were each held to 1-1 draws earlier on Sunday, away to Alaves and Girona respectively.

Villarreal, meanwhile, stay 17th, with the pressure mounting on coach Javier Calleja, who has overseen only one league win since September.

Alena, a dainty attacking midfielder with 13 years training in Barca's academy, is likely to enjoy many more celebrations in front of the club's fans but for Dembele, the sense was time had been running out.

Valverde's patience with the 21-year-old appeared to be wearing thin when he was dropped against Real Betis three weeks ago but a late equaliser against Atletico earned a reprieve, and this was another lively performance.

"He played a great game and was one of our outstanding players," Valverde said. "He has so many assets - penetration, dribbling, shooting, speed, confidence, daring. Let's hope it continues like this."

Heartening too for Valverde will have been the clean sheet, Barcelona's first in the league since the second game of the season back in August.

An early Dembele shot might have gone in had it not been blocked by Santiago Caseres before the Frenchman turned provider, picking out Pique with a perfectly judged cross. Pique held off Victor Ruiz, perhaps even too vigorously, and headed in.

Villarreal, however, remained in touch, literally, as Pique was lucky to escape a harsher punishment when he threw a hand into Gerard Moreno's face. When Moreno was substituted he made sure to mutter towards Pique on his way off.

Barca finally put the result beyond doubt as Messi's brilliant pass from deep freed Alena, who chipped Sergio Asenjo like he had scored dozens of goals like this rather than just his first.

Little over 100 kilometres away in Catalonia, Atletico Madrid's troubles away from home had continued as they needed Diego Costa to help them snatch a late equaliser against Girona.

Costa's excellent run and first touch panicked Girona's Jonas Ramalho into poking into his own net at Montilivi after the in-form Cristhian Stuani had fired the hosts ahead from the penalty spot.

Avoiding defeat was enough to put a smile on Diego Simeone's face at full-time but his side have now won only once in seven league matches on the road this season.

"La Liga is barbaric," Simeone said afterwards. "There are no easy opponents."

Girona are seventh, with Stuani leading the way. His goal from the spot was his 12th of the campaign and enough to leave him top of the scoring charts, ahead of Iago Aspas and Messi.

Sevilla could have reclaimed their place at the summit but instead became the latest side to be thwarted at Mendizorrotza.

Alaves stormed ahead when Sevilla's Sergi Gomez played Jonathan Calleri onside by feathering the ball on its way through, with Jony waiting to finish at the back post.

Sevilla were incensed but still left with a point thanks to a smart finish from Wissam Ben Yedder. Alaves stay fourth, with the draw ensuring only two of the table's top six - Barca and Real Madrid - managed to win this weekend.