UP policewoman who stood up to local BJP leaders transferred 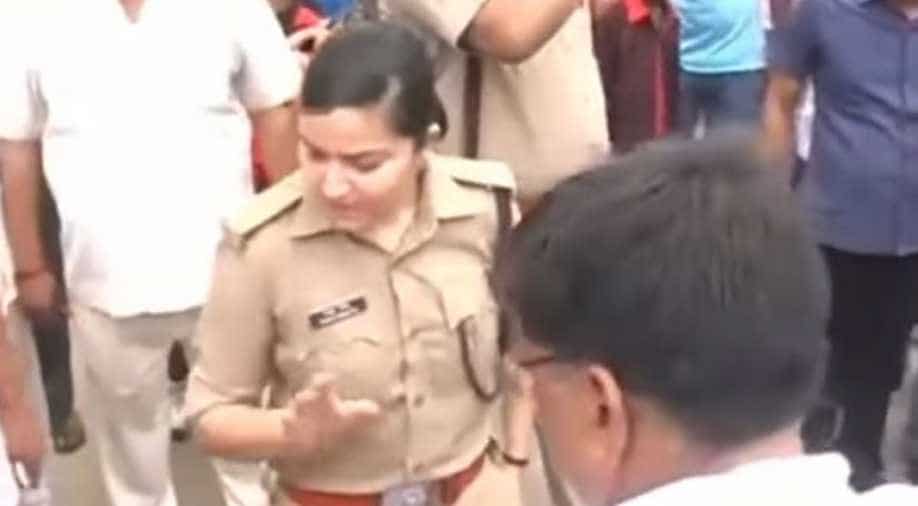 Shreshtha Thakur had also sent five of the BJP leaders to jail for 'obstruction of duty'. Photograph:( Others )

The UP woman police officer who stood up to local BJP leaders and sent five of them to jail for obstructing a government servant from doing her duty has been transferred.

The police officer, Shreshta Thakur, was on traffic duty in the Syana circle of Bulandshahar district on June 22 when she stopped a person riding a motorcycle without a helmet and slapped a Rs 200 fine on him.

The motorcyclist introduced himself as BJP leader Pramod Kumar.

Kumar also telephoned other BJP leaders who soon arrived on the spot and started protesting against the police.

The city's BJP president Mukesh Bhardwaj also arrived on the spot. He accused a police constable of demanding money from Kumar to let him go.

The Hindustan Times reported that Thakur's transfer to Bahraich came about after a meeting of 11 party MLAs and one MP with chief minister Yogi Adityanath.

It added that Bhardwaj "made no bones in admitting that Thakur’s transfer was essential to keeping intact the pride of party workers and leaders".

The Hindustan Times added that "he (Bhardwaj) also charged the cop with using objectionable language against CM Yogi Adityanath and other party leaders".

A video (below) of the incident had gone viral on social media.

In the video, Thakur can be heard telling the BJP leaders that they should get a letter from the chief minister stating that members of the BJP are exempt from police checking.

Media reports added that a mass transfer of officers had taken place in Uttar Pradesh, and that Thakur was among 234 officers who had been transferred by the Yogi Adityanath government.