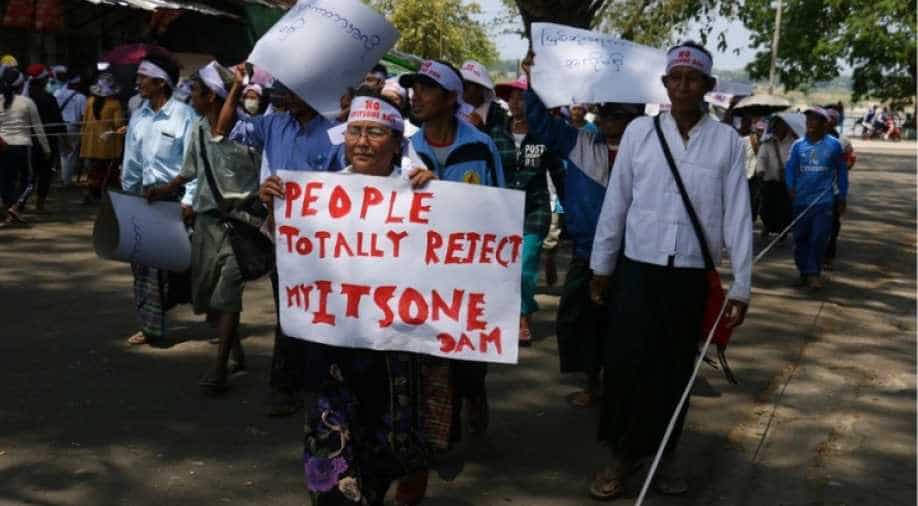 People from Kachin State take part in a protest against the Irrawaddy Myitsone dam project in Waimaw, near the Myitkyina capital of Kachin State. Photograph:( AFP )

People of northern Myanmar under the leadership of Aung San Suu Kyi, took to the streets to protest against the proposed reinstatement of a Chinese-backed mega-dam.

Thousands of people in northern Myanmar took to the streets on Monday to protest against the proposed reinstatement of a Chinese-backed mega-dam they say will cause huge environmental damage and bring little benefit to the country.

The protest came just days ahead of a trip by civilian leader Aung San Suu Kyi to Beijing for a summit on China's Belt and Road Initiative.

But public anger rose to the surface as the country started to transition towards democracy and the $3.6 billion project was mothballed two years later.

If the 6,000-megawatt dam were built on the country's famed Ayeyarwaddy River, it would flood an area the size of Singapore, displacing tens of thousands.

Now China is increasing pressure on its southern neighbour to revive the controversial project.

On Monday protesters marched through the Kachin town of Waimaw, some 50 kilometres from the proposed site of the dam, brandishing banners reading "No Myitsone Dam" and calling for the river to "flow freely forever".

"Myitsone is our inheritance from our ancestors and we cannot lose it," protester Tang Gun told AFP by phone.

He said more than 4,000 people took part in the march while several thousand more had signed a petition pledging their support for the protest.

The proposed project has stoked widespread public anger and anti-Chinese sentiment across Myanmar.

A World Wide Fund for Nature (WWF) 2018 report estimated that some 34 million people in Myanmar live in the Ayeyarwaddy basin, roughly two-thirds of the country's population.

An environmental assessment commissioned by the Myanmar government five years ago strongly advised against the dam's construction, saying the move could alter the river flow on a wide scale.

Suu Kyi was also an opponent of the dam before her party swept to power in 2015 elections.

Now many are alarmed she might have flipflopped on the issue after a speech in March when she called on people to think about the dam "from a wider perspective".

Myanmar is a vital piece of China's Belt and Road Initiative, the pet $1 trillion projects of President Xi Jinping that includes maritime, rail and road projects in Asia, Africa and Europe.

China says some 37 nations will be represented at the leader level of the April 25-27 summit in Beijing.