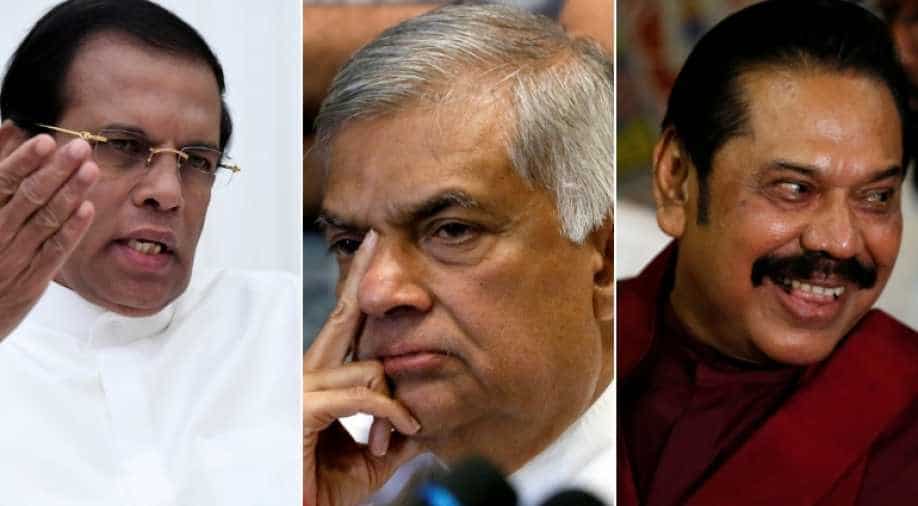 The crisis was kicked off by President Maithripala Sirisena announcing on October 26 that he was sacking Prime Minister Ranil Wickremesinghe. The two had ruled in coalition since 2015.

A crisis sparked by the Sri Lanka president when he fired his prime minister on October 26 deepened Tuesday when the Supreme Court rejected his subsequent sacking of parliament.

Here is an overview of the drama unfolding in the Indian Ocean island nation:

President Maithripala Sirisena's announcement that he has sacked Ranil Wickremesinghe, the prime minister with whom he has ruled in coalition since 2015, comes as a shock.

In another dramatic move, a new premier is named moments later -- highly controversial former strongman leader Mahinda Rajapakse -- who is shown on television being sworn in at a rushed ceremony.

It comes after disagreements between Sirisena and Wickremesinghe over economic policy as well as day-to-day government administration.

Wickremesinghe vows to fight his sacking.

Overnight on October 26 to 27, Rajapakse loyalists storm two state-owned television networks they regard as loyal to the outgoing government and force them off the air.

On October 27 Wickremesinghe demands an emergency session of parliament so he can prove his majority.

Sirisena responds by suspending the assembly until November 16.

Police cancel all leave as tensions mount in Colombo, where Wickremesinghe continues to occupy the official prime minister's residence at Temple Trees.

On October 28 parliamentary speaker Karu Jayasuriya says he recognises Wickremesinghe as the lawful prime minister until another candidate can prove a majority in parliament.

The same day bodyguards for petroleum minister Arjuna Ranatunga, allied to Wickremesinghe, open fire inside a government ministry as a mob loyal to Sirisena besieges his office.

A 34-year-old man is killed and two other people are injured.

On October 29, amid warnings of a potential "bloodbath", police arrest Ranatunga after trade unions accuse him of ordering the previous day's shooting.

Sirisena lifts the suspension of parliament on November 1, but in a U-turn hours later his party insists it will remain suspended.

On November 4 Sirisena announces parliament will reconvene on November 14.

A day later busloads of Rajapakse supporters rally near parliament.

On November 8 hundreds of cars carrying supporters of Wickremesinghe bring chaos to the capital's streets as they call for parliament to be reopened.

On November 9, hours after Sirisena's party announces he does not have a majority to get his prime minister nominee through the legislature, the president dissolves parliament.

He announces a snap election for January 5.

The United States voices concern as lawmakers warn that US aid is in question.

The following day the speaker accuses Sirisena of "usurping" the rights of legislators and asks public servants to ignore his "illegal orders".

The president defends his decision in a televised address to the nation, saying a meeting of parliament could have led to clashes among rival MPs and possible "civil unrest".

On November 13 the Supreme Court decides to restore the sacked parliament, also ordering a halt to preparations for snap elections in January.

In a major setback to President Maithripala Sirisena, the Sri Lankan Parliament on November 14 passed a "no-confidence motion" against the government headed by his controversially-appointed prime minister Mahinda Rajapaksa.

Parliament Speaker Karu Jayasuriya announced that a majority of the 225-member assembly supported the no-confidence motion against Rajapaksa, who was appointed by President Sirisena as prime minister on October 26 in place of Wickremesinghe.

Jayasuriya later adjourned the House until 10 am on November 15.