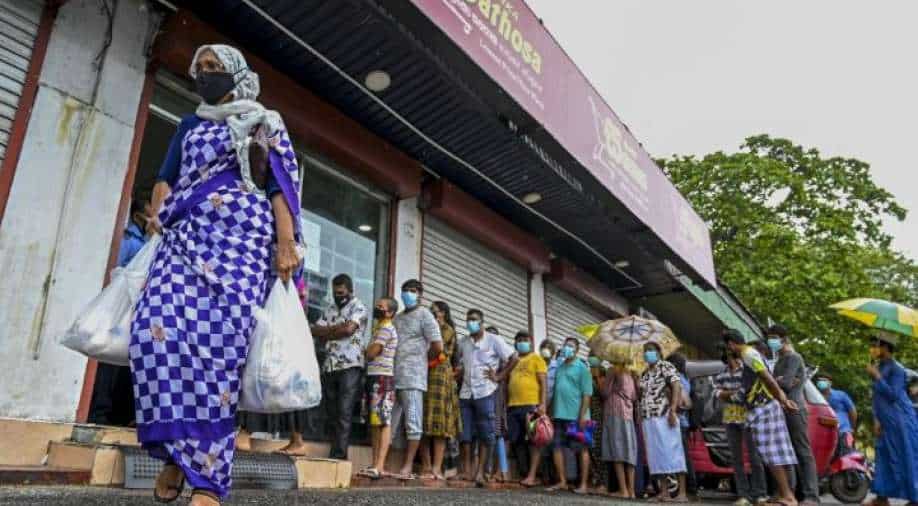 A woman carrying food bags walks pasts people standing in queue outside a state-run supermarket to buy essential food items in Colombo on September 3, 2021 as Sri Lanka began imposing price controls on essential food from September 3 after using a state of emergency to seize allegedly hoarded stocks of sugar and rice. Photograph:( AFP )

A shortage of foreign currency caused by a pandemic recession has unleashed the shortages of food, medicines and other essential items for the island nation of 21 million people

The Sri Lankan government on Friday ended price controls on essential foods in a bid to end black market trading as food shortages worsen amid a foreign currency crisis.

"Prices could go up by as much as 37 per cent across the board, but it is hoped dealers will not make unconscionable profits," a trade ministry official told AFP.

A shortage of foreign currency caused by a pandemic recession has unleashed the shortages of food, medicines and other essential items for the island nation of 21 million people.

The government declared a state of emergency over the food shortages on August 31 and imposed rationing.

It forced farmers to sell their rice to a state agency and seized some from private warehouses. But the shortages worsened and last week authorities lifted controls on rice hoping to get supplies into markets.

Since then rice prices have risen by more than a third though people can buy as much as they want.

During rationing, state stores sold only one kilogramme (2.2 pounds) of rice for each person. Sugar and lentils were similarly rationed. Virtually all private traders withdrew from the market.

Central Bank governor Nivard Cabraal told reporters on Thursday that he had authorised some $50 million to get the release of containers of milk powder blocked in Colombo port for the past three months.

Also Read | Sri Lanka won't be allowed to be used for any activity against India: President Rajapaksa

With price controls removed from Friday, a kilo of imported milk powder was increased by more than a third to 1,300 rupees ($6.5), traders said. The price of gas is also due to go up by about 35 percent.

The Sri Lankan economy shrank by a record 3.6 per cent last year as the coronavirus pandemic brought a brutal halt to the key tourism industry.

The government banned imports of non-essential goods, including vehicles, spare parts and appliances in March 2020 because of currency shortages.

Sri Lanka's foreign reserves stood at $3.55 billion at the end of August. It has to repay about $2 billion in foreign debts before the end of the year.

Some analysts and opposition politicians say it may be forced to seek a bailout.