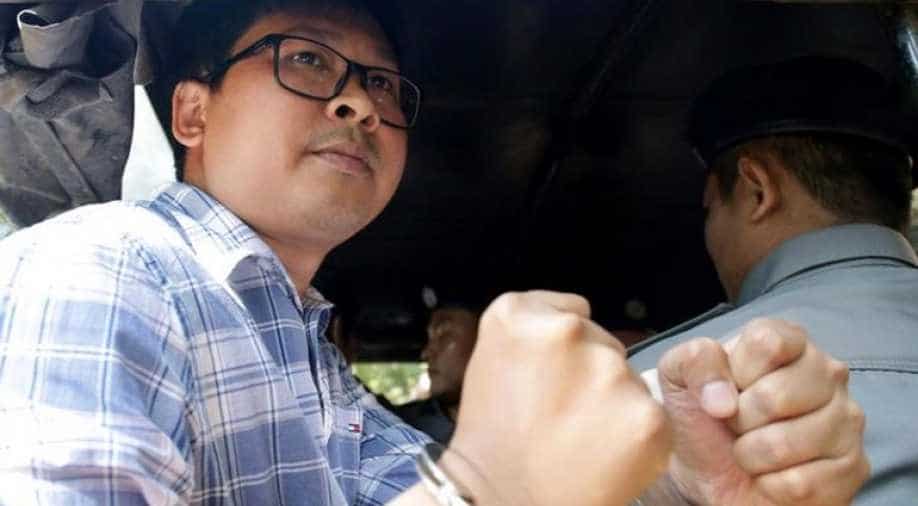 Two Reuters journalists accused of violating Myanmar's colonial-era Official Secrets Act were brought to a district court on Thursday where, according to a defence lawyer, the judge is due to rule on a bail request.

The prosecution is also scheduled to present at least one more witness at the hearing in the Insein District Court of Yangon, Myanmar's main city.

The two journalists - Wa Lone, 31, and Kyaw Soe Oo, 27 - had worked on Reuters coverage of a crisis in Rakhine state, where an army crackdown on insurgents since the end of August has triggered the flight of 688,000 Rohingya Muslims, according to the United Nations.

The reporters were detained on December 12 after they had been invited to meet police officers over dinner in Yangon. They have told relatives they were arrested almost immediately after being handed some documents at a restaurant by two officers they had not met before.

The two reporters were smiling as they were brought handcuffed to the court and Wa Lone gave the "thumbs up" sign.

Diplomats from the US, British, Canadian, Norwegian, Swedish, French and Danish embassies were present as well as United Nations and EU officials.

At the last court proceedings on January 23, the first witness presented by the prosecution, Police Lieutenant Colonel Yu Naing, said he was told the reporters were arrested while they were walking along a road carrying four official documents that included a listing of forces and weapons of a police battalion in the Maungdaw district of Rakhine state.

Yu Naing repeatedly told the court "I don't know", when asked about the circumstances of the arrest because it was only reported to him by subordinates. He could not point to evidence that the defendants were acting for the enemy or hostile forces, defence lawyer Khin Maung Zaw told reporters after the hearing.

The prosecution has 24 other witnesses in the case, more than half of whom are police officers, Khin Maung Zaw has said. Another police witness was likely to be called on Thursday, he said.

A ruling on an application for bail will also be announced at the hearing, Khin Maung Zaw said.

The prosecution has previously objected to the bail application.

Reuters repeated its calls for the pair's prompt release in a statement after the last hearing.

"They are innocent of any wrongdoing and should be allowed to return to their jobs reporting on events in Myanmar," the news agency said.

The Danish embassy in Myanmar said its officers attended the previous hearing, where "many inconsistencies in the material put before the court to substantiate the charges were revealed".

"We once again urge the immediate release of the two journalists," the embassy said in a statement on Thursday.

In a Twitter message, the Committee to Protect Journalists also reiterated its demand that the two reporters be set free.

Wa Lone and Kyaw Soe Oo are being tried under the Official Secrets Act, which dates back to 1923 - when Myanmar, then known as Burma, was under British rule - and carries a maximum prison sentence of 14 years.

They have been accused under Section 3.1 (c) of the act, which covers entering prohibited places, and taking images or obtaining secret official documents that "might be or is intended to be, directly or indirectly, useful to an enemy".

Government officials from some of the world's major nations, including the United States, Britain and Canada, as well as top UN officials, have called for the reporters to be freed.

Veteran US politician Bill Richardson said last week that Myanmar leader Aung San Suu Kyi's response was "furious" when he brought up the case in a meeting with her.

Richardson quit an international panel advising the Myanmar government on the Rohingya crisis, saying it was conducting a "whitewash" and accusing Suu Kyi of lacking "moral leadership".

Suu Kyi's office said her government had asked Richardson to step down and accused him of pursuing "his own agenda".

A statement from the nine remaining members of the advisory board said they met last week "with open minds" and rejected Richardson's criticism that he feared the panel would be used as "a cheerleading squad".