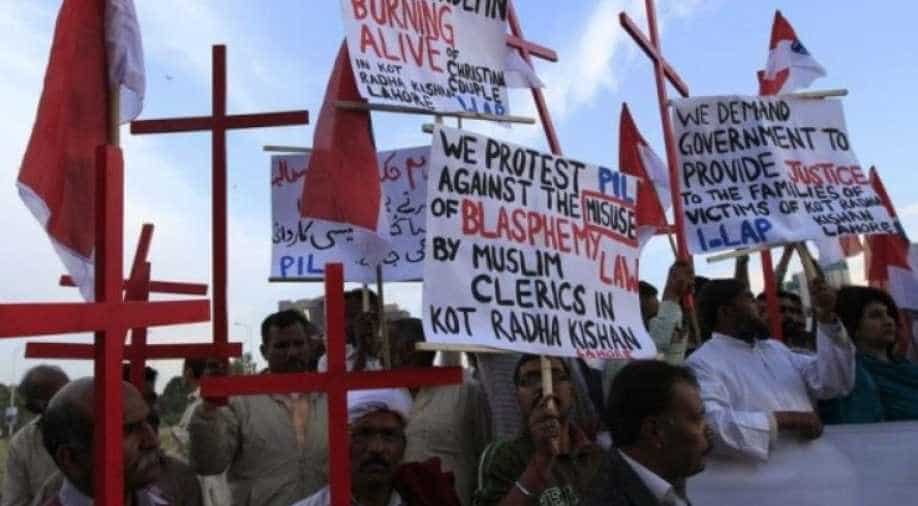 Members of the Pakistani Christian community hold placards and wooden crosses during a demonstration to condemn the death of a Christian couple in a village in Punjab province on Tuesday, in Islamabad November 5, 2014. Photograph:( Reuters )

This is yet another example of systematic and state prosecution of minorities in Pakistan and how they are deprived of their rights in the country.

In a setback to the Christian community in Pakistan, the Edwardes College Peshawar, a private Christian institute, has been nationalised by the Peshawar High Court.

This is yet another example of systematic and state prosecution of minorities in Pakistan and how they are deprived of their rights in the country.

Dawn had reported on October 10, that a Peshawar High Court (PHC) bench turned down the plea of Peshawar Diocese Bishop seeking a stay order till filing of an appeal before Supreme Court of Pakistan against a judgment of the court of declaring Edwardes College a nationalised entity and not a private educational institution.

On October 2, the newspaper had reported that the "PHC bench turned down the plea of the Peshawar Diocese Bishop to declare the historical Edwardes College a private entity and ruled that the college was a nationalised educational institution governed by a board of governors (BoG) formed by the provincial government."

The court had on October 1, rejected a petition "requesting to declare the college, which was set up in 1900, a private institution in light of an earlier judgment delivered by the court in 2016 and to stop the government from interfering in its affairs.

"The written judgement in the case is out now and the college has been nationalised under the 1974 notification by Peshawar High Court. Pakistan Prime Minister Imran Khan who never misses a chance to talk about the condition of minorities in India has so far maintained a silence on the issue. The Christian community all around the world feels back-stabbed and utterly disappointed by this "unjust decision" of PHC.

The News International in a report on October 19 had said that the Christian community leaders have accused the Khyber Pakhtunkhwa government of interfering in the affairs of Edwardes College.

The British Pakistani Christian community has called on Prime Minister Imran Khan to issue an executive order to confirm that Edwardes College Peshawar will remain a private Christian institute and will not be nationalised, The News International said in its report.

In August, at a United Nations meet, the United States, the United Kingdom and Canada raised the issue of suppression of religious freedom by Pakistan and slammed it for "persecuting and repressing" religious minorities.

During the meet on Safety of Religious Minorities, the US, UK and Canada expressed concerns over the increasing, widespread and undue restrictions on religious freedom in Pakistan and China.

They highlighted the discrimination suffered by the Uyghur community in China, and Christians, Ahmadiyas, Hindus and other minorities in Pakistan.

In recent years, there have been a number of incidents of forced abduction, conversion and even killing of girls from minority communities, which highlights their plight in Pakistan.

Pakistan has been discriminating against its religious minorities through targeted violence, mass murders, extrajudicial killings, abduction, rapes, and forced conversion to Islam. This places Pakistani Hindus, Christians, Sikhs, Ahmadiyyas and Shias among the most persecuted minorities in the region.