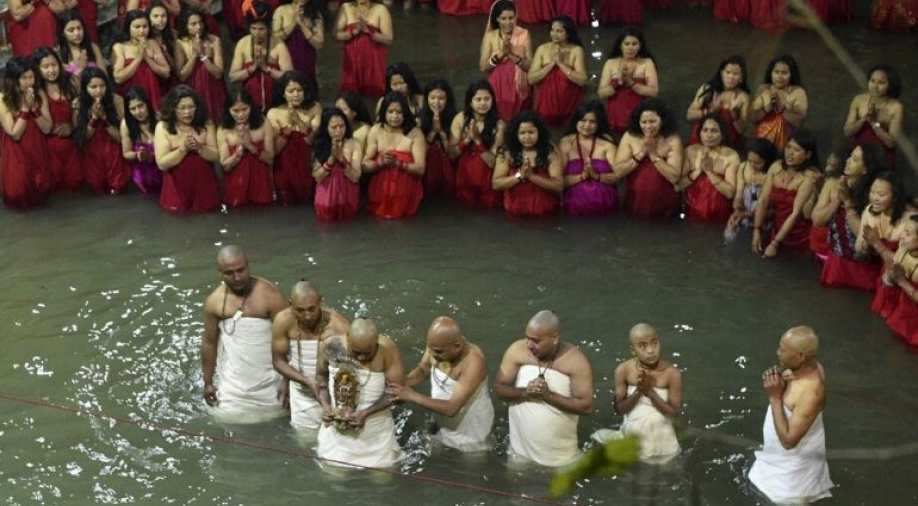 The festival, which kickstarted on January 10, with the worship of Hindu deity Swasthani and recitation of religious sermons, will conclude on the next full moon day.

After offering prayers, the women will eat food devoid of salt and other spices and that too only once a day. Braving the winter chill, the devotees follow the same rituals for the entire month to celebrate the festival of Shree Swasthani Brata Katha.

The festival, which kickstarted on January 10, with the worship of Hindu deity Swasthani and recitation of religious sermons, will conclude on the next full moon day.

Hindus in Nepal read one chapter out of 31 lessons a day from the religious book `Swasthani` which comprises of stories including tales on creation of the world, Hindu deities and demons.

"For a month, we get up at 4 in the morning. We have been told to get up at a particular time after the conch is blown by priests. After that we are not supposed to sleep. We go down to Salinadi river after getting up to take a holy dip," said a devotee Kunti Devi Shrestha, who has been taking a month-long Swasthani Brata.

"After that we come up to the temple and sit around the fire to make ourselves warm. We start worshipping Lord Madhav Narayan after devotees who came from other places pay their obesiance," the devotee said.

"After that, Lord Madhav Narayan is taken out on tour and there is `Srahastra Dhara` on the head of Madhav Narayan. After offering `jal` (sacred water), we can go to our room and we eat items that are cooked on our own," she added.

Devotees, who take on fast for a month, do not eat foods cooked by others. They only eat rice, beaten rice, sugar, ghee, sugar candy, molasses, spinach from Patan, peas amongst those considered sacred.

The `Swasthani` book mainly tells the story of Lord Shiva and Goddess Parvati that is described in Skandha Purana, belonging to the Hindu`s secondary scripture.

It also has directives which states about do's and dont's to be followed while undertaking a month-long fast that has been followed on a long run.

The scripture also has a section that states about the start of observing fast which brought in prosperity and happiness and mentions about Salinadi which is also is the reason for the people to flock to a particular place to observe the fast.

The sermon recited for a month also mentions that Goddess Parvati prayed to Goddess Swasthani to become Lord Shiva`s wife because of which unmarried females also observe fast praying to get a suitable groom.

The married men, on the other hand, pray for the well-being and progress of their spouses and children.

"I observed fast of Shree Swasthani two years before praying for the recovery of my son, who fractured his hand and for my elder son to get Permanent Residency (PR) in Australia. Both of these came true," Yasodha Bhattarai who came from Biratnagar to observe fast in Kathmandu told ANI.

"Now I am observing fast for my younger son and I hope that he gets admission in the Nepal Army School for studies," she said.

Special arrangements have been made on the banks of Salinadi for the convenience of devotees in Sankhu area of Kathmandu.

On the final day of the fasting, all the offerings made to the goddess is immersed in the river.