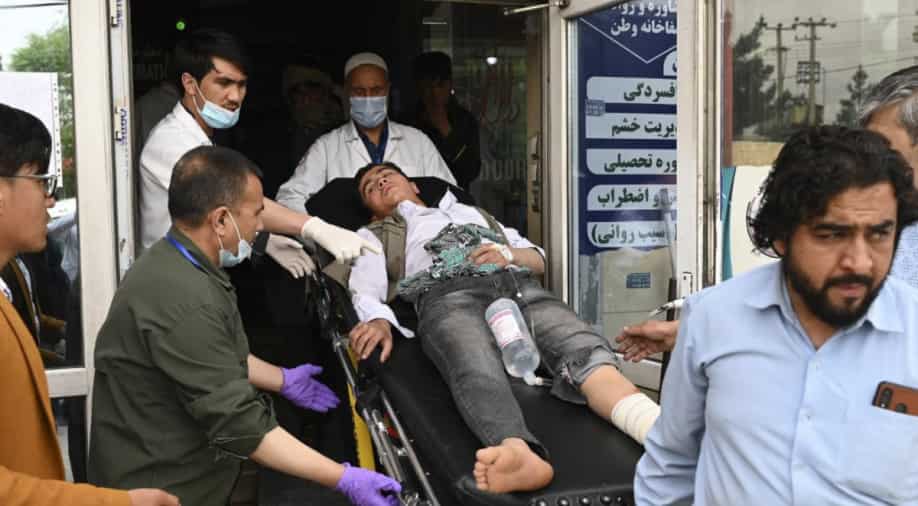 Medical staff move a wounded youth on a stretcher inside a hospital in Kabul Photograph:( AFP )

Injuring 18 people, the blast took place when Shiites in Afghanistan are commemorating the first 10 days of the Muslim holy month of Muharram

Killing eight civilians in an area largely inhabited by Afghanistan's minority Shiite Muslim community, a bomb attached to a handcart exploded in Kabul on Friday.

Injuring 18 people, the blast took place when Shiites in Afghanistan are commemorating the first 10 days of the Muslim holy month of Muharram.

According to police spokesman Khalid Zadran, "Security teams are trying to find the perpetrators."

Saying the bombing was the "work of those who are enemies of Islam and the country", government spokesman Zabihullah Mujahid confirmed the toll.

Taking responsibility for the attack, the Sunni jihadist Islamic State said IS fighters placed explosives in a vegetable cart.

Zadran said Afghan police believes that members of the ethnic Hazara community, who are Shiite Muslims, were the target of the blast.

They were going to gather at mosques and take part in processions marking the death of the revered Shiite Imam Hussein Ibn Ali after a few days.

IS has continued to target Shiites even though number of violent public attacks across the country has fallen since the Taliban returned to power in August last year.

The minority group, which makes up between 10 to 20 percent of Afghanistan's population of 38 million, is called heretic by Islamic State.

Analysts say the jihadist group remains a key security challenge although Taliban officials insist their forces have defeated IS.