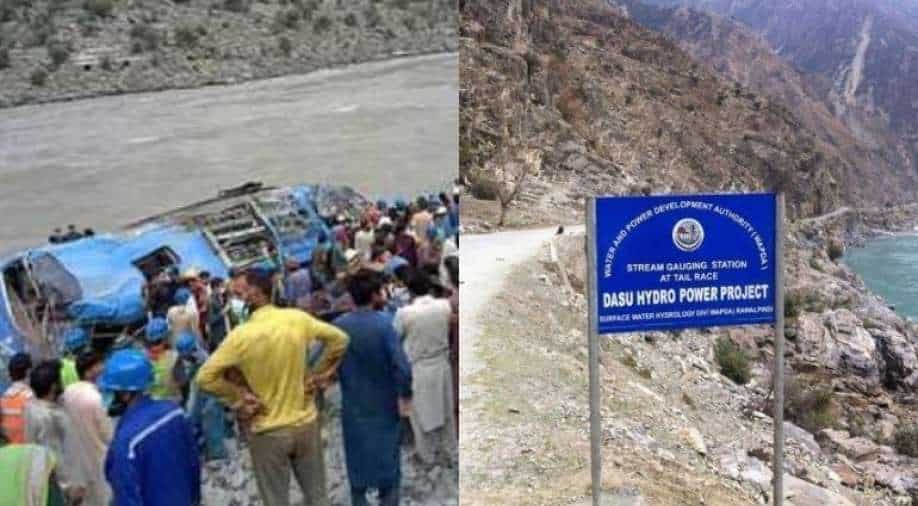 13 people, including 9 Chinese nationals were killed in a blast on a bus in Pakistan. Photograph:( Twitter )

Before beginning development on the stalled Dasu Hydropower Project, China allegedly sought $38 million in compensation from Pakistan for the killed and injured Chinese engineers.

As per a story published in Pakistani financial daily newspaper Business Recorder, China has allegedly requested $38 million in compensation from Pakistan for the deceased and injured Chinese engineers working on the Dasu Hydropower Project before resuming construction on the delayed project.

On July 14, 2021, thirteen people were killed, including nine Chinese engineers, two locals, and two Frontier Constabulary (FC) soldiers, and over two dozen more were injured when a bus transporting the project's staff plummeted into a ravine after being hit by an explosives-laden car.

According to Dr Shahzeb Khan Bangash, Secretary of Water Resources, civil construction on the project has been halted since the July attack on Chinese engineers.

According to the sources, the matter of compensation for Chinese nationals is being considered at a high level in Pakistan.

Pakistan govt's Ministry of Foreign Affairs, Ministry of Finance, Ministry of Interior, Ministry of Water Resources, and the Chinese embassy were collaborating closely on the compensation package and the project's reinstatement.

According to reports, the Steering Committee, comprised of Secretaries of various Ministries, formed another Committee to debate on problems related to the Dasu project, particularly the amount of compensation sought by the Chinese government.

On the request of the Pakistani government, the Chinese company, China Gezhouba Group Corp, which had halted construction on the Dasu project following the bus tragedy, had declared a reversal of its intention to resume operations and fire Pakistani workers.

However, the firm has not yet begun operations and has stated that it would not proceed until a compensation package and increased protection for Chinese citizens are granted.