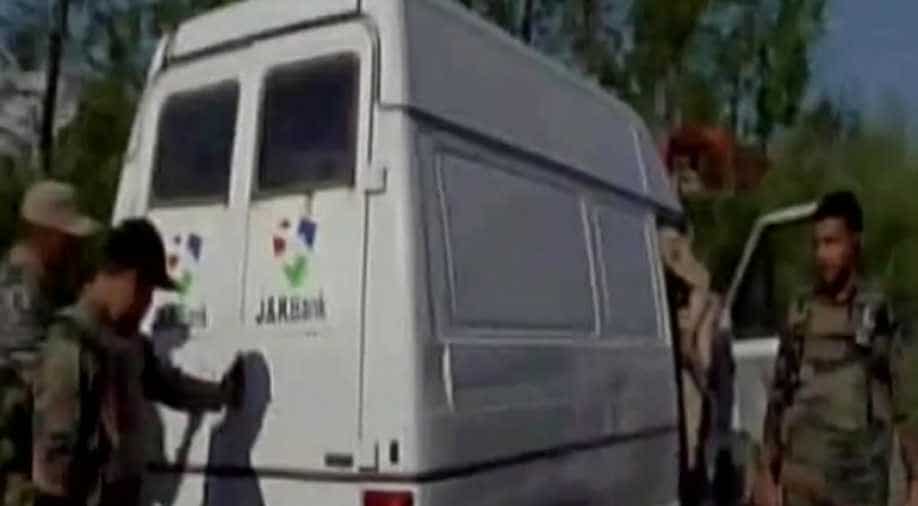 The official said the move to stop cash transactions was temporary till effective measures are put in place to ensure safety and security of bank employees and assets. Photograph:( ANI )

In the wake of militants targeting banks in south Kashmir, cash transactions at nearly 40 branches in sensitive areas of Pulwama and Shopian districts in South Kashmir have been stopped.

The step has been taken following an advisory issued by security agencies asking the banks operating in the two districts to stop cash deliveries at the branches located in these areas as they apprehend more such attacks.

The cash transactions have been stopped at the branches belonging to the Jammu and Kashmir Bank and Ellaquai Dehati Bank, which were targeted by militants recently.

A senior official of Jammu and Kashmir Bank said all other banking operations including ATM services would continue in these areas.
"We were told that the security agencies have inputs about more such attacks, so we had to stop cash transactions at these branches designated by the security agencies as sensitive," he said.

Other banking operations, including cashless transactions and ATM services, will continue to take place.

Also, people in these areas can undertake cash transactions at other designated branches in the nearby areas, he said.

The official said the move to stop cash transactions was temporary till effective measures are put in place to ensure safety and security of bank employees and assets.

"We have discussed various measures for the safety and security of our employees as well as the cash.

"We are putting those measures in place in the coming few days and once they are in place, cash transactions at these bank branches will be resumed," he said.

Various measures like providing additional armed security guards at these branches and having bullet-proof cash-vans have been discussed, the official said.

The advisory by the security agencies comes in the wake of a spurt in attacks on banks in south Kashmir.

On May 1, militants attacked a cash van of Jammu and Kashmir Bank and shot dead five policemen and two bank security guards in Damhal Hanji Pora area of Kulgam district in south Kashmir.

Meanwhile, a special state-level bankers committee meeting was held here yesterday in which the issue was discussed.

Finance Minister Haseeb Drabu, who presided over the meeting, said there was a need to devise special security measures to deal with this kind of situation.

"Surveillance is good but it cannot substitute physical security on ground," he said.

The meeting unanimously called for revisiting the Standard Operating Procedures (SOP) for augmenting and upgrading physical security as well as ensuring safety of public life and property.