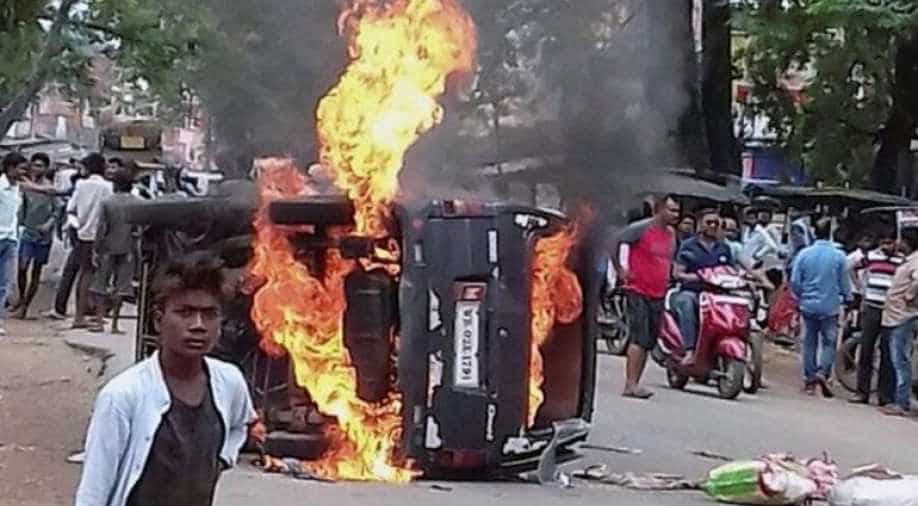 Nityanand Mahto, 45, the party`s media in-charge in Ramgarh, was arrested on Saturday from the district party chief`s house, police said.?In photo: A vehicle is torched in Ramgarh during a protest against the lynching. Photograph:( Zee News Network )

A BJP leader has been arrested in Jharkhand in connection with Thursday`s lynching of a Muslim man, police said on Sunday.

Two other people have also been arrested.

Nityanand Mahto, 45, the party`s media in-charge in Ramgarh, was arrested on Saturday from the district party chief`s house, police said.

Mahto has pleaded his innocence, saying he visited the spot only to inquire into the incident. He said he got to the murder spot only after the police had reached.

On June 29, Alimuddin alias Asgar Ansari was beaten to death near Bajartand village for carrying "banned meat" -- beef -- in a Maruti van.

The reports say police say a video of the incident shows the BJP leader was not only present at the spot but also that he dragged Ansari out of the van.

As he watched, the mob then thrashed Ansari mercilessly, say police.

The reports go on to quote police as describing the lynching as "premeditated murder", with police saying the attackers seemed to have been lying in wait for Ansari.

Police said the killers suspected to be people who had business dealings with Ansari.