At least 27 dead, over 600 injured after storm hit southern Nepal 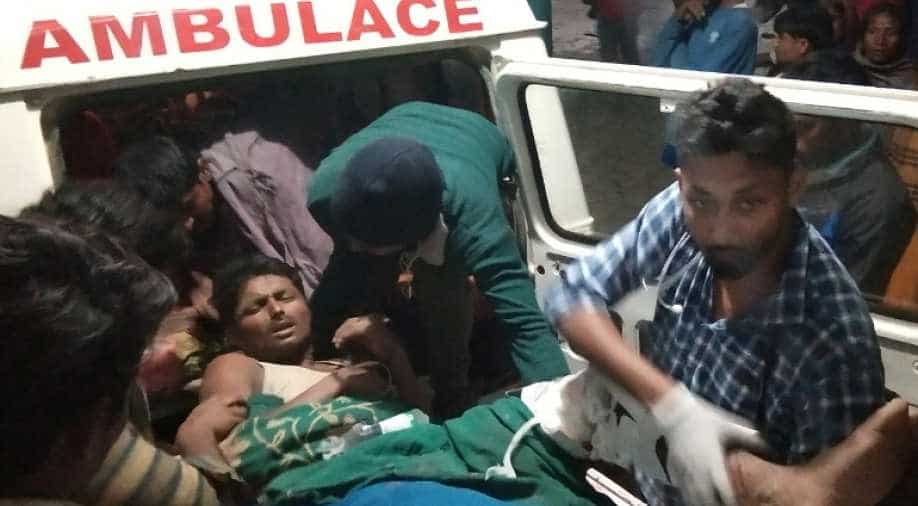 File photo: A victim of a thunderstorm is carried out from an ambulance while being brought for treatment at a hospital in Parsha District, Nepal. Photograph:( Reuters )

The thunderstorm swept through the district of Bara and adjoining areas late Sunday killing at least 27 people and injuring more than 600, according to the home ministry.

A freak storm tore down houses and overturned cars and trucks as it swept across southern Nepal  killing at least 27 people and leaving more than 600 injured, officials said Monday.

The rare spring storm battered the rural district of Bara and adjoining areas late Sunday. Five children were among the dead, the home ministry said, and a major operation was underway Monday to get relief supplies to the region and evacuate injured.

The winds were so fierce that they overturned a bus carrying passengers, witnesses said. Houses, trees and electricity pylons were all toppled in the storm.

Injured victims flocked to local hospitals who were unable to cope and at least seven people were airlifted to Kathmandu for treatment.

"I've never seen anything like this. The winds took away everything, my home and my family," Ram Babu Patel, 45, whose wife was killed in the storm, told AFP by telephone.

"I was at home getting ready for dinner when the storm hit -- it was unbelievable. We have nothing left."

Many of the victims were crushed to death under the debris of their houses or by fallen trees and poles. The strong winds overturned parked cars on the roads.

Prakash Tharu, a volunteer in Bara district hit hard by the storm, described the scene of devastation in the villages.

"The storm destroyed everything in its path. Houses have no roofs and trees are all down," Tharu said.

"There is a desperate need for food and relief."

Rescuers struggled to reach many settlements blocked by fallen trees and electricity poles.

"Security bodies including the army have been working intensely since Sunday night on rescues and relief," said Rajesh Poudel, Bara's district chief.

Every year hundreds die in landslides and floods during Nepal's monsoon season, but storms causing such high casualties in spring are rare.

Prime Minister KP Sharma Oli expressed his condolences and said that the government would do its best for treatment of the injured.

The provincial government has announced free treatment and a financial assistance of 300,000 rupees ($2,710) for families of the dead.