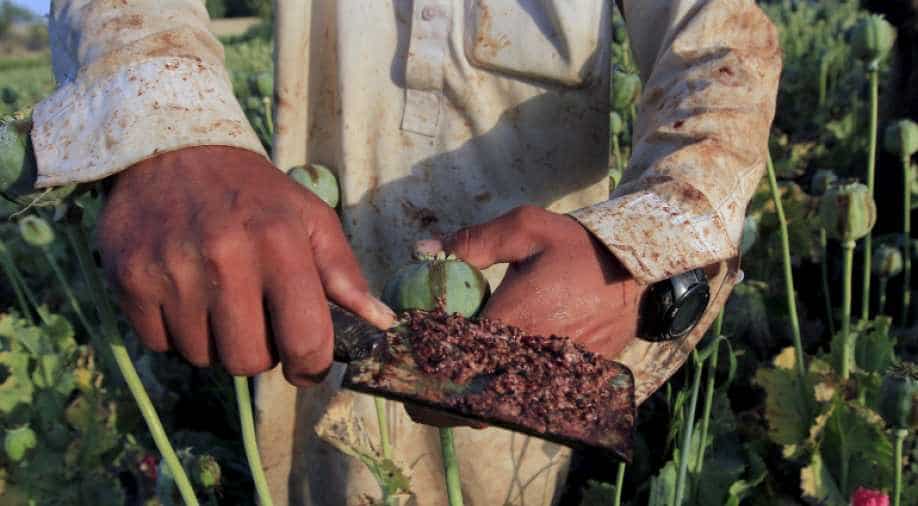 Raw opium from a poppy head is seen at a poppy farmer's field on the outskirts of Jalalabad. Photograph:( Reuters )

For years, Afghanistan has been the global leader in opium production, despite some $8.9 billion spent since 2002 by the US government to stop production and trafficking in narcotics.

Mohammad Ahmadi, a young opium farmer in the southern Afghan province of Kandahar has the kind of confidence that underlines how meagre the results have been of years of effort and billions of dollars spent fighting narcotics.

"I`m not afraid of anyone. No one can harm me and the others while we`re harvesting poppy," he said as he took a break from working his field.

As pressure grows for a political settlement to end 18 years of war in Afghanistan, the drug trade remains a major threat, leaving the country at the risk of becoming a "narco-state", the Special Inspector General for Afghanistan Reconstruction (SIGAR), a US Congressional watchdog, said in recent report.

Growing opium is theoretically a crime in Afghanistan but it is a way of life for tens of thousands of farmers like Ahmadi, who feeds a family of 14 with the money he makes from selling the sticky, brown sap from the poppies in his fields to be refined into heroin.

Efforts to develop alternative crops like saffron for poor farmers have had some success, but overall, they have hardly put a dent in the drugs trade.
"I want to continue my studies but economic issues force me to do this," Ahmadi said, blaming the government for not creating the conditions for other jobs.

For years, Afghanistan has been the global leader in opium production, despite some $8.9 billion spent since 2002 by the US government to stop production and trafficking in narcotics.

With compelling economic incentives and politically protected networks - from cultivators to producers and distributors - deeply entrenched, officials say there is little they can do to stop it.

"We don`t have the ability to annihilate poppy cultivation in all of the country," said Gul Mohammad Shukran, head of counter-narcotics in Kandahar.

In a bad year for drought, that represented a 20 per cent decline in the area under cultivation from the record year in 2017, but it was still the second highest in recent years.

By contrast, efforts to wipe out the crop have been meagre and just 406 hectares were cleared last year, according to the UNODC, hampered in part by expanding Taliban control over larger parts of the country.

About half of Afghanistan`s opium is produced in areas of high insurgent activity, according to SIGAR.

"It is increasingly getting very difficult to destroy standing crops due to the fighting and the increased Taliban control in poppy-yielding provinces," said Mohammad Hashim Aurtaq, the deputy interior minister in Kabul who oversees opium eradication.

Air strikes are the only way to dent drug production, he said.

Since late 2017, US forces have attacked sites believed to be used for processing drugs as part of efforts to cut off funds to the Taliban, who profit greatly from narcotics.

However, results have been modest, according to SIGAR.

Between November 2017 and May 2018, US air and ground strikes against drug processing sites cost the Taliban some $86 million in lost revenues, raw materials and equipment, SIGAR said.

That compares with an estimated $600 million generated for Afghan farmers in 2018 from a trade that is reckoned to be the equivalent to as much as 30% of Afghanistan`s entire legitimate economic output.

For their part, the Taliban, who famously banned opium growing in 2000, when they held power across most of the country, have suggested they will once again eliminate the poppies if peace talks succeed.

For the moment, however, drugs provide them with a stream of revenue from levies on farmers and traffickers, and they say they are reluctant to disrupt the lives of farmers like Ahmadi.

"We have neither banned nor promoted poppy cultivation," said the chief Taliban spokesman, Zabiullah Mujahid.

"We don`t ban poppy cultivation because banning the crops means going against poor local people and it is not the right time for us go against our people."