How selfish are plants? Let’s do some root analysis 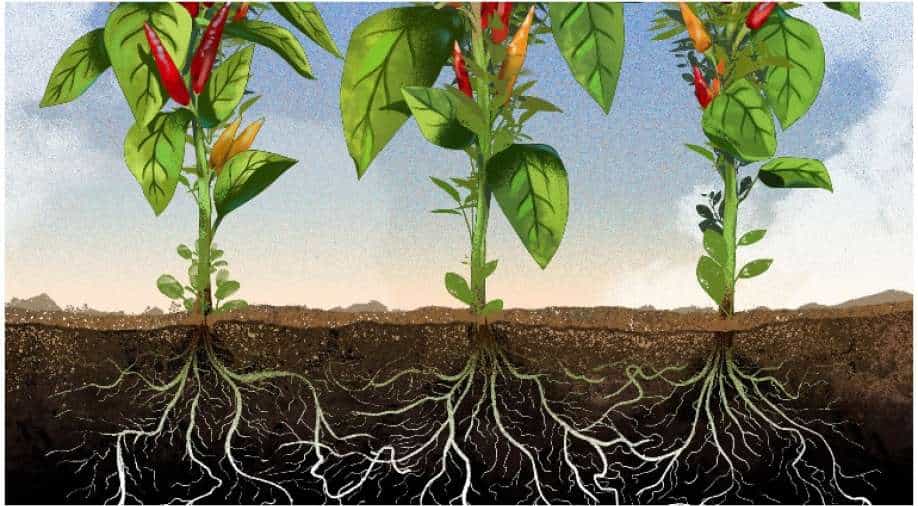 A paper published earlier this month in Science details a new model that appears to reconcile confusion in root competition by accounting for the spatial distribution of roots along with their prevalence. (Jonathan Bartlett/The New York Times) Photograph:( The New York Times )

For years, researchers have looked into the tangled problem of root competition, coming up with diverse and sometimes conflicting findings about how plants strategically arrange their roots when the dirt gets crowded

Imagine you’re a pepper plant. You need water and nutrients. Luckily, you can grow roots that grab that stuff from the soil and pipe it back to you. So far, so good.

There’s just one problem. Your neighbor — also a pepper plant — needs the same things. There’s only so much to go around. What’s your move?

For years, researchers have looked into the tangled problem of root competition, coming up with diverse and sometimes conflicting findings about how plants strategically arrange their roots when the dirt gets crowded. A paper published this month in Science details a new model that appears to reconcile this confusion by accounting for the spatial distribution of roots along with their prevalence. In initial tests performed by the paper’s authors, real plants played by the rules the model laid out.

It takes energy and materials to grow and maintain a root. Ideally, a plant will get more resources out of its roots than it spends on their construction and upkeep. Plants can sense the concentration of water and nutrients in particular soil patches, and apportion roots accordingly, to maximize their yield.

For a solitary plant, this is simple enough. But when other plants are around, the calculus changes. Researchers have borrowed tools from game theory — a way to analyze and optimize decision making, used by everyone from financial analysts to actual gamers — to try to figure out exactly how.

One model, published in 2001, predicted that plants growing close together end up in a “tragedy of the commons,” with each individual in a shared space making more roots than a lone plant would, but also getting fewer rewards. Some real-world experiments matched this model, finding that plants with neighbors did create more root mass than those growing on their own.

But other studies have found the opposite: that competing plants invested less in roots. And others still found no appreciable difference.

“There was all this controversy,” said Ciro Cabal, a doctoral student in ecology and evolutionary biology at Princeton University and the lead author of the new study.

Cabal wondered whether that model, and others like it, might be missing a component. They treated all roots the same, no matter their distance from the plant’s stem. But in reality, the farther a root grows from the plant, the more costly it is to produce and maintain.

So he and his co-authors built a new model to account for that. “We incorporated space,” he said. “And we found this new theory.”

In their model, a plant facing competition will underproduce those more expensive, wide-ranging roots that might otherwise overlap with a neighbor’s. But it will overproduce roots closer to home, effectively consolidating power and preventing any “I drink your milkshake” style plays.

Whether plants with neighbors over- or underproduce roots compared with solo plants depends on how far apart the two competing plants are, Cabal said. So those findings from previous studies that seemed to contradict each other are “all possible according to our model.”

Next, the researchers brought this hypothetical math down to earth. They planted sweet peppers in containers — some alone, and some in twos about four inches apart — and stained the roots of the rival peppers with dyes, to differentiate them. After a few months, they mapped out where and how densely each plant’s roots had grown, and found it matched the model. The paired peppers grew more roots that stayed close to home, and fewer that went farther away, compared with the peppers that had containers to themselves.

The new model “provides an excellent baseline prediction for how root systems might behave in the presence of neighbors,” and brings together hypotheses and findings that previously seemed contradictory, said Jochen Schenk, a professor of plant biology at California State University Fullerton who was not involved in the study.

But he cautions against overgeneralizing about its findings.

“I would not accept the claim that a single test with one plant species can tell us what plants will do in general,” he said.

Different species may respond to each other in different ways. Recent research also suggests that other life-forms, such as fungi and microbes, bear on how some plants interact underground.

Even Cabal did not expect that his model and experiment would correspond so neatly. While he expects real-world cases to challenge the particulars of the model, “I truly believe that the principle we present is true,” he said. Next, he plans to try his experiment in the wild, on a few species of Mediterranean shrub.

If this strategy does turn out to be widely used by plants, people could use it to incorporate more accurate estimates of plant biomass into climate models, Cabal said. And if it’s possible, breeding some of the competitiveness out of plants could also improve yields in agriculture. Farmers are often stymied by self-interested crops that put their energy into roots instead of fruits.

Cabal and his co-authors also modeled what he called a “cooperative solution” to the nutrient-sharing problem. In this scenario, “each plant is not being selfish — it’s not maximizing its own reward,” he said. Instead, the plants collectively position their roots to produce the most nutrient uptake for the least investment overall.

Alas, experimentally, “we didn’t find it in these plants,” he said.

For now, it’s every pepper for itself.