Could Congress reverse Trump’s decision to pull troops out of Syria? 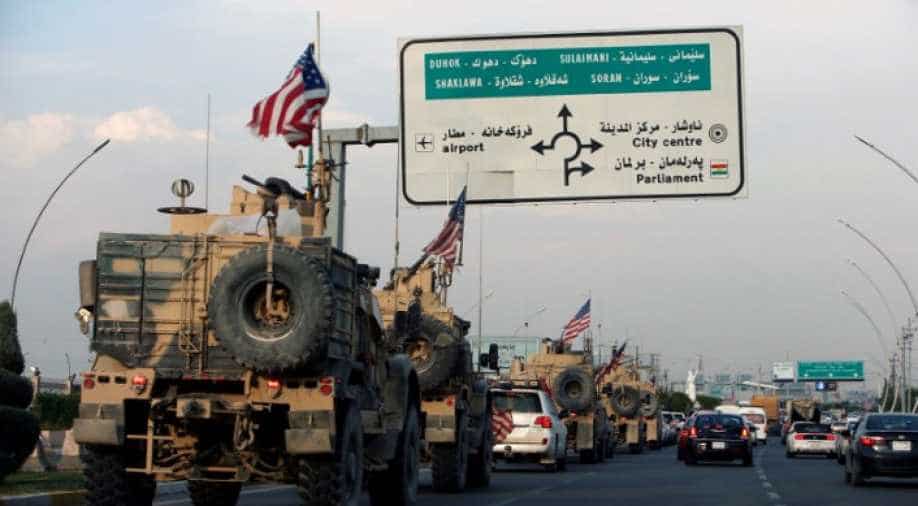 Already, several proposals are taking shape in the House and Senate that would impose financial sanctions on Turkish officials, restrict weapons sales to Turkey and otherwise punish Turkey for its actions.

The political and humanitarian outcry condemning President Donald Trump’s decision to pull US troops out of Syria came soon after he made the announcement.

Trump’s actions paved the way for Turkish troops to attack US-allied Kurdish forces that had been fighting the Islamic State group. In reaction, on October 15, the US House of Representatives passed a nonbinding resolution opposing his move, with strong bipartisan support.

This resolution, like many attempts to articulate a collective view on foreign policy, lets members of Congress seem like they’re holding the president accountable without actually doing so.

Constitutional scholars know there are several ways Congress can express disagreement with a president. In addition to public critiques, they can vote on nonbinding resolutions, hold hearings, restrict military spending for particular purposes or – if presidents commit the worst offences – impeach him.

Already, several proposals are taking shape in the House and Senate that would impose financial sanctions on Turkish officials, restrict weapons sales to Turkey and otherwise punish Turkey for its actions.

But some legislators worry these sanctions would go too far. Democratic Sen. Chris Murphy of Connecticut notes that it’s complicated to consider condemning Turkey "for doing something that the president is actively helping them do."

Senate Majority Leader Mitch McConnell of Kentucky said that some of the actions being considered are reserved for "the worst rogue states" – not fellow NATO members like Turkey.

These various parallel discussions demonstrate how hard it can be for Congress to pass a piece of legislation that effectively constrains presidents in the realm of foreign policy.

The Constitution declares that the president is chief executive and commander-in-chief of the military. It says Congress controls what taxpayer money is spent on – including being able to block spending on specific military operations.

Congress also has the power to declare war, and a more obscure power, to issue "letters of marque and reprisal," which many scholars interpret as giving Congress control over small conflicts as well as large ones.

In 1973, after the unprecedented abuses of power in the Johnson and Nixon administrations, Congress passed the War Powers Resolution, with the intention of eliminating presidential unilateralism.

However, Congress created a loophole by allowing presidents the ability to initiate military hostilities on their own authority for 60 to 90 days. When Congress has provided authorisations, they use broad and vague language. For instance, Barack Obama argued that he could use a 2001 congressional authorisation – designed to sanction catching those associated with the 9/11 attack – as the legal basis for his bombing campaign against the Islamic State group in 2014.

Since the US joined the UN and NATO in the 1940s, Congress has ceded power to the president. For the last 70 years, presidents have been the predominant decision-maker in foreign affairs, collecting and digesting the information provided by advisers. In contrast, members of the House and Senate endorse or condemn those actions from the sidelines.

Harry Truman, for instance, used a UN Security Council resolution as justification for sending the US military to Korea in the summer of 1950. Congress never declared war, nor authorised military force; they did, however, allocate funding to continue the conflict.

Since the War Powers Resolution was passed, presidents of both parties have deployed troops or ordered bombings without authorisation and suffered very few consequences. While members of Congress complain, they have yet to force presidents to seek authorisation – even when the president ignores the rules. George HW Bush sent troops to Saudi Arabia in the lead-up to the first Gulf War prior to congressional authorisation. Bill Clinton acted without authorisation in Bosnia and Kosovo. Obama continued operations past the 90-day time limit in Libya.

Generally, the hands-off approach by Congress has not completely derailed foreign policy, because presidents have tended to engage in discussion, including with Cabinet members, foreign partners and sometimes congressional leaders, before making decisions or taking decisive action.

Decisions about whether and how to act typically involve members of the executive branch, perhaps with some input from Congress, weighing a variety of factors against one another, thinking in both the short and long terms.

The situation in northern Syria is one of the most complex issues currently facing the president. There are two US allies who are opposed to each other. Any move by the US raises the possibility of increasing instability or worsening a humanitarian crisis.

Typically, after weighing many options, presidents use their first-mover advantage to take clear and decisive action, often informing Congress after the fact. In this instance, however, while Trump has discussed withdrawing troops from Syria for almost a year, he seemed to impulsively make a decision in mid-October.

Furthermore, Trump has, in this and other instances surprised his advisers and political allies with sudden shifts in policy. Due to the incredible unilateral power housed in the executive branch, Trump can conduct foreign policy in this manner.

Congress is designed to debate and talk

Congress, by contrast, is made up of 535 voting members – 435 in the House and 100 in the Senate – who answer to roughly 330 million constituents. They are the deliberative bodies that can act only through discussion. That’s by design: it slows down decision-making by incorporating public opinion into government policy.

Senators and members of Congress have a wide range of opinions about foreign policy, based on how they evaluate and weigh the various factors – national security, human rights, military action and foreign aid.

The partisan divide between the political parties makes reconciliation between differing viewpoints even more onerous. In these circumstances, even passing a nonbinding resolution in one house of Congress is impressive.

Unable or unwilling to do more, lawmakers are leaving an opening for members of the executive branch to act without a lot of oversight or strong counterbalancing measures from their branch.

The role of popularity

Historically, presidents who have faced strong opposition in Congress have tended to launch smaller military operations with shorter durations.

For example, Obama launched a very limited strike against Libya in 2011, emphasising there would be "no boots on the ground." His decision to ask Congress for an authorisation of military force against Syria in 2013 may have been a political means of avoiding action because he knew a Republican Congress would never give him one.

Similarly, Clinton’s efforts to address the continuing crisis in Kosovo occurred while he faced impeachment proceedings in the Senate, which likely affected how much force he committed to the operation.

Though Trump may think his base will remain loyal no matter what, presidents are all too aware that unsuccessful military operations will decrease their popularity among the American people.

Congress can help tip the balance of public opinion through hearings. Shedding light on the actions of the president can alter public perception about military or diplomatic action.

The Trump presidency has changed this balance, however. Previous presidents grudgingly complied with congressional investigations, but Trump’s White House has resisted scrutiny at almost every turn. In addition, Trump is less interested in the opinions of the entire American populace, and much more focused on pleasing his base.

As a result of this new dynamic, congressional condemnations of his actions regarding the Kurds and Turkey may not have the effect they would have on other presidents. But Congress can take stronger steps, if it wishes to – and if members can overcome the institutional limitations that often stop them.

(Sarah Burns is an Associate Professor of Political Science, Rochester Institute of Technology)