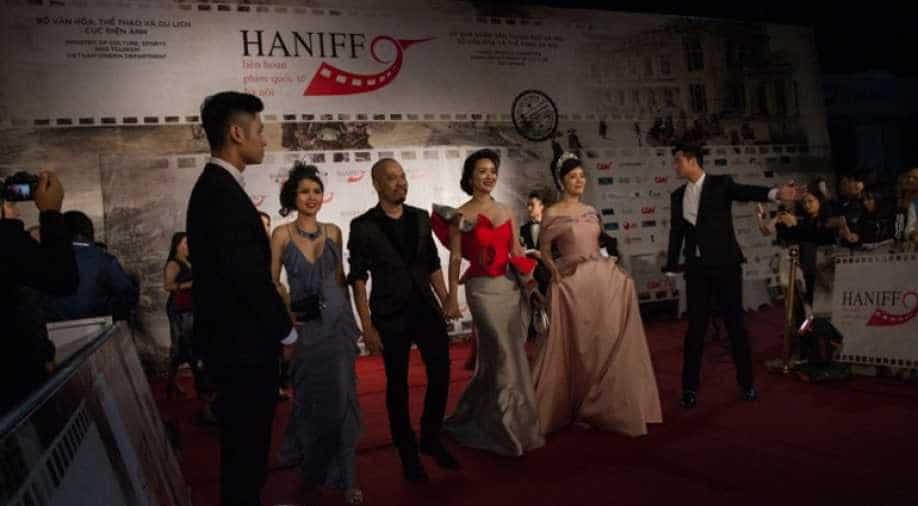 This year's festival features 146 films from more than 40 countries, including a re-release of 'Indochine', filmed in Vietnam and starring French cinema queen Catherine Deneuve, who is in town for the event. Photograph:( AFP )

Vietnam's glitterati donned their finest on the red carpet on Tuesday for the opening of the Hanoi International Film Festival, aimed at boosting the communist nation's little-known movie industry.

Welcomed by cheering fans, Vietnam's A-listers were joined by filmmakers and actors from around the globe including from Russia, India and as far afield as Ghana, all in town for the fourth edition of the festival that runs until Saturday.

Some are hoping the event will breathe life into Vietnam's movie industry, still in its infancy and mostly unknown, even on home soil.

"An event like this, what it does is it bring Vietnamese films into the forefront of international recognition," producer Timothy Linh Bui told AFP at the festival, where his romance-horror film "The Housemaid" is screening.

"There's a large talent pool of actors and filmmakers so it's a very exciting time to see what takes shape and where it can grow from here."

This year's festival features 146 films from more than 40 countries, including a re-release of "Indochine", filmed in Vietnam and starring French cinema queen Catherine Deneuve, who is in town for the event.

But some worry the five-day festival won't be enough to lure in young audiences in Vietnam, most of whom would rather see the latest Hollywood action blockbuster or Korean romance flick than a Vietnamese arthouse movie.

"Hoping that the film festival will have some sort of momentum to boost the nation's cinematography is a bit overblown" said Nguyen Thi Hong Ngat, deputy head of Vietnam's Cinematography Association.

Such momentum has been lacking in recent years: though the number of film studios boomed from 63 in 2009 to nearly 400 last year, the number of Vietnamese movies produced has barely notched up, with many studios producing commercial work instead of feature films.

The festival will also host a roundtable with bigwigs from Indian cinema, home to the wildly successful Bollywood industry, a chance for Vietnam's novice industry to learn from business veterans.

But the secret to success is not simply copying a formula, but rather encouraging Vietnam's filmmakers to find their own voices, said Indian director Adoor Gopalakrishnan.

"In a country like Vietnam, they should not follow Bollywood or Hollywood, that should not be the model," he told AFP.