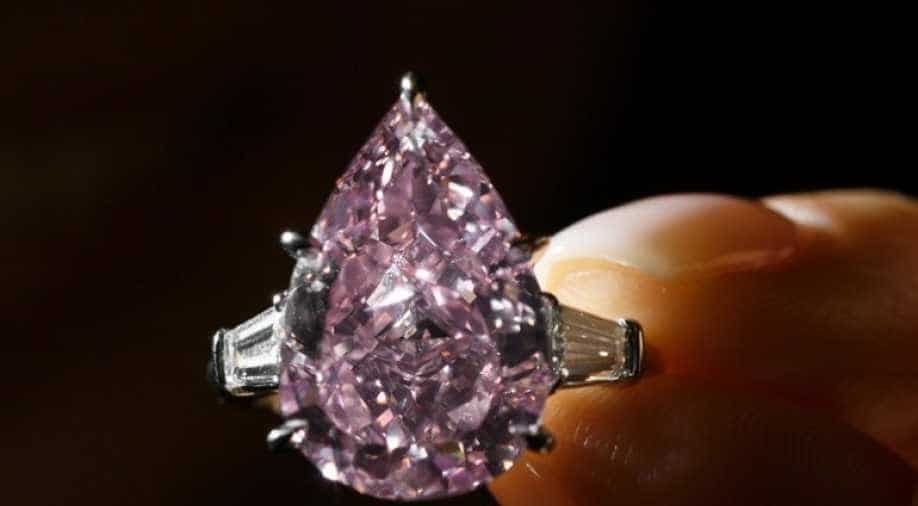 The colour stones that have set a recent string of eye-popping records. Photograph:( AFP )

Russian diamonds that reputedly helped broker peace between warring empires three centuries ago will go to the highest bidder at the Geneva jewel auctions this week.

The Swiss city's twice-annual sales of rare jewels are often dominated by stones the size of door-stoppers.

But this week, gems enriched by the weight of history will share centre-stage with those valued by their weight in carats.

Christie's begins the auction season on Tuesday at the luxury Four Seasons Hotel des Bergues on Lake Geneva, where a line of Bentleys or Porches typically builds in the runup to the autumn sale.

Rival Sotheby's takes its turn Wednesday across the road at the five-star Hotel Beau Rivage.

Among Sotheby's showcase offers is a parure featuring diamonds once owned by Russian empress Catherine I that were given to her by her husband, Czar Peter the Great, who led Russia until his death in 1725.

In 1711, Catherine was worried that a raging conflict with the Ottoman Empire posed an existential threat to Russia and ordered her husband --- in the middle of the night --- to draft a peace treaty, Sotheby's said, citing historical records.

Without telling Peter, Catherine sent the peace proposal and all the jewels she was travelling with to the Ottoman Sultan Ahmed III.

The Sultan "accepted these and was obviously delighted, and the truce was given and the (Russian) empire was saved", David Bennet, head of Sotheby's International Jewellery Division, told AFP.

The parure featuring Catherine's diamonds is expected to sell for between $3 million (2.8 million euros) and $5 million.

In an auction heavy on Russian imperial treasures, Sotheby's is also offering a diamond necklace with a detachable clasp owned by Empress Catherine II --- Catherine the Great, who ruled Russia from 1762 to 1796. It is similarly valued at up to $5 million.

But it is colour stones that have set a recent string of eye-popping records.

In May, Christie's set the current mark with the 14.62-carat "Oppenheimer Blue", which sold for $57.54 million, including all fees and commissions.

That bested a record set a year ago by Sotheby's, when Hong Kong billionaire Joseph Lau's bought the 12.03-carat "Blue Moon of Josephine" for $48.4 million.

Those records do not appear under threat this week but Christie's is aiming to capitalise on the still-solid coloured stones market with a 9.14-carat Fancy Vivid Pink estimated to sell for $16-$18 million.

The rare "Fancy Vivid" classification is awarded by the Gemological Institute of America to signify a stone's exceptional colour and clarity.

Sotheby's top coloured gem going under the hammer this week is the 8.01-carat "Sky Blue Diamond", with a pre-auction estimated price of $15-$25 million.

"It really is the absolute pinnacle of rarity," Bennet told AFP, noting that nearly all blue diamonds come from just a single site, South Africa's Cullinan mine.

Sotheby's has estimated its 342-lot auction at a total of $100 million.

Christie's is offering 220 lots, with an estimated value of $80 million.