WION Exclusive: We could not be provoked, says BJP's Ram Madhav on Doklam stand-off 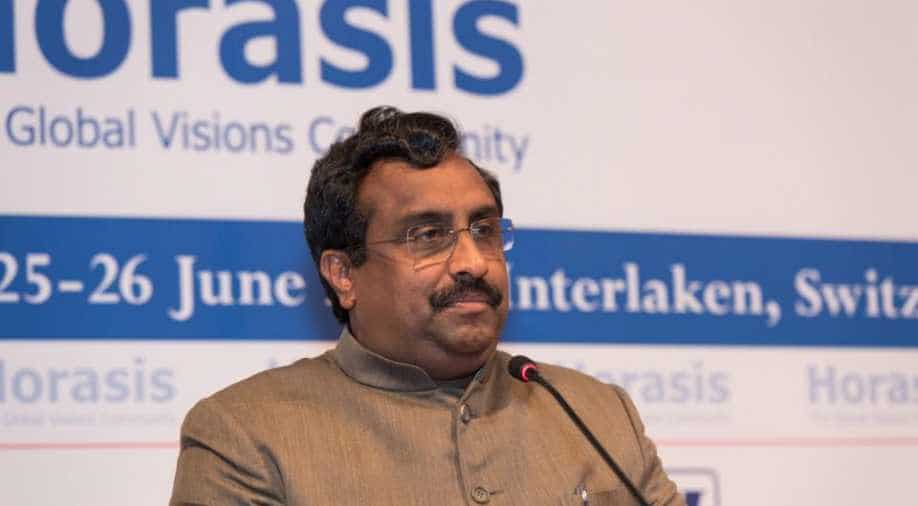 In an exclusive interview with WION's Kartikeya Sharma, BJP's general secretary Ram Madhav spoke about India's bilateral relations with China, and how India tackled the stand-off with China in Dokalam

In an exclusive interview with WION's Kartikeya Sharma, BJP's general secretary Ram Madhav spoke about India's bilateral relations with China, and how India tackled the stand-off with China in Dokalam. He also shared the government's strategy for expanding its business in Sri Lanka, where it faces competition with China, the Indian government's stand on militancy and Article 35A.

Q: Has India sent a strong signal to the world the way it dealt with this particular Doklam dispute?

A: Both sides have appreciated the fact that bilateral interests are too big to be compromised on issues like this and for this reason disengagement took place. This has to be seen as a successful diplomatic endeavour by India at one level. But we also maintained firm ground presence. I don’t see it as a victory and defeat. It is a result of simultaneous effort. We could not be provoked. We maintained calm and majesty. The combination of both has yielded results for us. That is the approach of new India. We will stand on our views firmly but will be ready for diplomatic resolutions of disputes.

Q: Then why does China maintain that it retains the right to patrol the area?

A: Patrolling within one's own borders is what normally happens. What we have been saying that we had a peace and tranquility agreement. Both the countries had reiterated that maintaining peace along the border is important. Hope China will uphold this sense of understanding.

Q: But Chinese media has been very belligerent and continues to maintain that India has withdrawn
unilaterally?

A: Unfortunately, the Chinese media took an aggressive and provocative stand. I appreciate Indian media for not getting into the trap of provocation. The mature diplomatic efforts gave results. The fact remained that both sides realised that it is too costly to get stuck in the stand-off.

Q: Is there enough space for India and China to thrive?

A: The world is too big for both of us. The world has enough opportunities but we should not step on each other’s toe.

Q: PM is going for BRICS. How do you see the emerging China, Pakistan and Russia axis?

A: I don’t know whether such an axis exists. Yes, there can be issue or situation-based responses but I think that this formulation is premature.

Q: Is India taking care of its interest in South Asia. For example, Chinese presence has increased in
Sri Lanka?

A: Both India and China are big countries with big economies. They naturally scout for avenues to fulfill domestic requirements. We also do the same. Naturally we are living in the same region hence competition is unavoidable but it shouldn’t be allowed to graduate into conflict and here lies the tight rope walk.

Q: But in context of Sri Lanka?

A: Even in countries in Africa, the same resources are being accessed. Even in Sri Lanka both maintain each other’s concerns. Sri Lanka is an important and close neighbour. Our trade is linked. I hope the Chinese side appreciates India’s special relationship with Sri Lanka.

Q: The Indian Ocean Conference is being organised at the Sri Lankan Prime Minister’s residence. Is
there a message?

A: It is a joint initiative by Sri Lanka, India and India Foundation. Yes, it is taking place at his residence called Temple Tree. This is a unique event. Countries which are called are those who have stake in the Indian Ocean region. The idea is to take control of this region by these countries. We are happy that Sri Lanka is taking so much interest. We appreciate it.

Q: You are the prime minister's point person when it comes to Sri Lanka. India has many concerns, for example the Matala airport. Any movement on it?

A: I’m no point person. Having said this, Hambantota is an important factor in our wider strategy.

India has an interest in Colombo's new terminal, gas platforms in the east and also the Matala airport. Yes, we are interested.

Q: Are these interests getting materialised?

A: There was an MOU. It was expressed that India was interested in some of the mentioned projects and the intent part was established. But mere intent wouldn’t suffice. The process of firming up is still on. Nevertheless, an MOU exists.

Q: Have you received positive signals from the Lankans?

A: There are certain technical hassles which are delaying the process. But in the near future both
sides will work on them to sort it out.

Q: What is the BJP’s strategy on Kashmir? When will the impasse break?

A: There is no impasse in Kashmir anymore. Civilian institutions are working properly but some areas in South Kashmir are affected. I can say this with surety that militancy is on the decline and there is demoralisation of the militant ranks today. The Indian state has taken a firm stand and recruitment for terror organisations has come down. We are confident that we will be able to overcome the problem of militancy. But that’s not the only issue. In the valley, there exists a deliberate campaign by Pakistan that some sort of alienation exists. The Centre is working on it.  We have zero tolerance for militancy. Stone pelters are being misled. We will deal with them differently. Our approach would be
development centric.

Q: The Hurriyat has been thoroughly exposed but is that enough?

A: The approach is not only to tackle underground militants but also the over ground facilitators. These people are the over ground sponsors of the cycle of violence in the valley. These merchants of militants had to be dealt with.

Q: What is the position of the BJP on article 35A?

A: It is a legal matter before the Supreme Court of India. It has to be handled only on the legal plane. There is an effort to make it into a political controversy to rake up separatist sentiments. The matter stands postponed by several months. I say this again, that it is only a legal matter to be dealt at the court's level.

Q: The Jammu and Kashmir chief minister did take political assurance from the prime minister (PM)?

A: It is between her and the PM. No comments.

Q: You are also in charge of the North East. You now have a government in Assam. Have you been able to solve the issue of illegal immigration? I ask this question in the context of Rohingyas who are being settled in J&K? This matter was also raised in Parliament.

A: Rohingaya is a major issue of concern for us. For all the nationalists. It is not good for India’s security. They are being settled in Jammu, Hyderabad and Delhi. Centre is aware of it. situation in Myanmar needs to stablise and because of this lot migration is happening. Government is looking into this issue with all seriousness.

Q: Political violence has increased in Kerala. Why?

A: Every time CPM comes to power, violence goes up. RSS and ABVP become the target. I’m sorry to say that state government if not direct complicity but can be blamed for indirect complicity for all the killings. They want to maim our cadres.

Q: Is it because that BJP has become a force to reckon with in Kerala?

A: RSS has a wide presence in the state. CPM cadre at grass root level get attracted to us and when they join us it becomes a provocation for them. But in democracy you should deal with opponents democratically and not through violence.

A: What is the lesson learnt from Haryana? Aren’t political parties responsible for it by soft peddling
deras?

Q:  Best efforts to maintain law and order sometimes fail and insufficient. Ideally, we should have done better. Having said this, I don’t want to put entire blame on the government. Yes, it is the responsibility of the state to handle it. having said it. You cannot blame the state completely. Sometimes development goes out of hand. It is unfortunate. We could have handled it better.

A: Maintaining law and order is state’s responsibility. I don’t deny it. we are sorry about it but
still cannot pin the entire blame on government?

Q: Should triple talaq verdict open the doors for reforms in minority community?

A: As far as the community part is concerned I would say. Muslim community should see it as an opportunity to reform the personal law so they don’t have to knock the door of Supreme Court. When Hindu society reform came up in early 60s, there were protests within the Hindu community but the larger community accepted. Society and community leadership should take it as an opportunity.

A: Everything has a time. Hope good sense prevails in the leadership

Q: BJP chief has spoken about Mission 350. Is it possible?

A: Yes, it is possible. Rajiv Gandhi secured more than 400 hundred seats. We have been working very hard in South and East. We are working hard in Kerala, Orissa and other states like Telangana. We can get two-thirds majority in the next Parliament.