Watch: Mehul Choksi could be in India in 48 hours, says Antigua and Barbuda PM 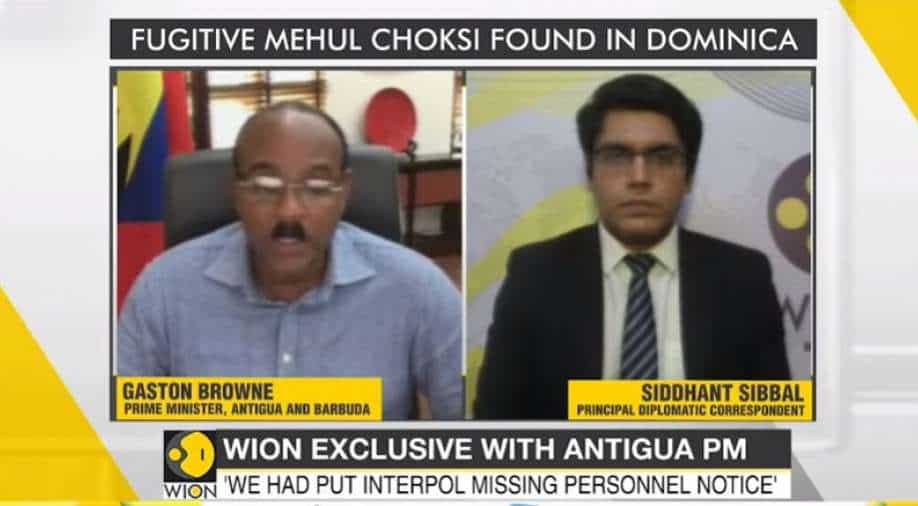 Mehul Choksi, who was missing for the last few days, was found in the Caribbean country of Dominica

Prime Minister of Antigua and Barbuda Gaston Browne has said that Mehul Choksi could be sent back to India in the next 48 hours from Dominica where he was found. The fugitive Indian diamantaire, who had gone missing from Antigua, was taken into custody by authorities of Dominica where he was captured while trying to flee.

Speaking exclusively and extensively to WION's  Principal Diplomatic Correspondent Sidhant Sibal, PM Browne said, "Assuming no legal impediments, I believe within the next 48 hours Choksi could be perhaps in a private jet, you know, repatriated to India."

Browne pointed out that he has spoken to Dominica's PM Roosevelt Skerrit over the development and requested him "not to have Choksi return to Antigua where he has legal and constitutional protections" and "send him back directly to India."

Choksi is wanted by Indian authorities in the $2 billion Punjab National Bank fraud case and had fled to the country in 2018, with India seeking to extradite him.

Sidhant Sibal: If you can give us the facts, where he is, in which part of Dominica?

Gaston Browne: Choksi was found in Dominica. He is presently detained and Antigua's government has been coordinating efforts with Dominican and Indian governments to ensure that Mr Choksi is deported directly from Dominica back to India.

We have specially requested PM Roosevelt Skerrit and law enforcement in Dominica not to have Mr Choksi return to Antigua where he has legal and constitutional protections, but instead to coordinate efforts and cooperate with the Indian government, Indian law enforcement, [and] have Mr Choksi repatriated directly to India. And the govt of Dominica is cooperating.

Sidhant Sibal: That means he can be directly sent to India?

Gaston Browne: Absolutely. He made a monumental error because he recognised that my government and my administration were gung ho about revoking his citizenship and having him extradited. So it would appear that he may have sought to travel to a neighbouring island with the hope he could have gone unnoticed.

We had put Interpol missing personnel notice. And he was captured in Dominica but he doesn't have the constitutional and legal protection that he enjoys as a citizen in Antigua and Barbuda. So Mr Choksi literally outdid himself.

Sidhant Sibal: Can you give me any timeframe by when he can be sent to India?

Gaston Browne: Presumably, assuming there are no legal impediments and the Government of India can get law enforcement to travel to Dominica within the next 48 hours, I believe that they should be in a strong position to have him repatriated.

Sidhant Sibal: Perhaps, by end of the week?

Gaston Browne: Exactly, assuming no legal impediments, I believe within the next 48 hours Choksi could be perhaps in a private jet, you know, repatriated to India.

Sidhant Sibal: How did he leave the country?

Gaston Browne: We don't have the details yet, but we believe that he would have left the island undetected by boat. But law enforcement acted very quickly and was able to put out an Interpol green notice and in these small islands, it's not difficult to identify strangers.

So, he made a monumental error there, and obviously, he would not enjoy the legal and constitutional protection here as a citizen of Antigua and Barbuda.

Assuming he is not a citizen of Dominica, and there is no evidence he is, then the Dominican govt can make him persona non grata and deport him directly back to India. So this is an interesting development and I think this could be a breakthrough for the Indian government and we are trying to ensure that Choksi is brought to justice.

Sidhant Sibal: What kind of conversation you had with your Indian counterpart? Have you informed the Indian high commissioner?

Gaston Browne: Yes I have, and I have spoken to PM Roosevelt Skerrit of Dominica as well and asked for his cooperation. The most significant issue at this time is for him not to be repatriated to Antigua because he is an Antiguan citizen.

That information has been communicated to the Indian high commissioner to Antigua and Barbuda who is stationed in Guyana, spoken directly. And we now expect both governments, Indian and Dominican governments, collaborate in having Choksi repatriated.

Sidhant Sibal: When did you find out Mehul Choksi is in a different country?

Gaston Browne: Earlier today, but we had to verify that it was the correct person. Having verified that it was Mr Choksi himself, that is when we started to make the phone call to make sure that he doesn't get away, that we don't inadvertently put him on a plane and have him sent back to Antigua, that would have been a travesty.

Sidhant Sibal: What has been the response of the Indian side?

Gaston Browne: I sense that they are very happy and they recognise to the government of Antigua and Barbuda did not provide a safe harbour for Choksi. He felt uncomfortable that he tried to abscond and skip the island and got to another Island.

Unfortunately, he has been identified as a fugitive, he is now been held and it means, Choksi will have to face the courts in India. I am sure government officials have been happy with the development.

Sidhant Sibal: And what has been the thought process of Dominica's government?

Gaston Browne: They are cooperating fully, in fact, PM Skerrit and I are very close allies and we collaborate on many issues and it was not a difficult proposition to convince him that he needed to cooperate with Antiguan and Indian governments. This is demonstrative of Antiguan government commitments to ensure that Choksi is brought to justice.