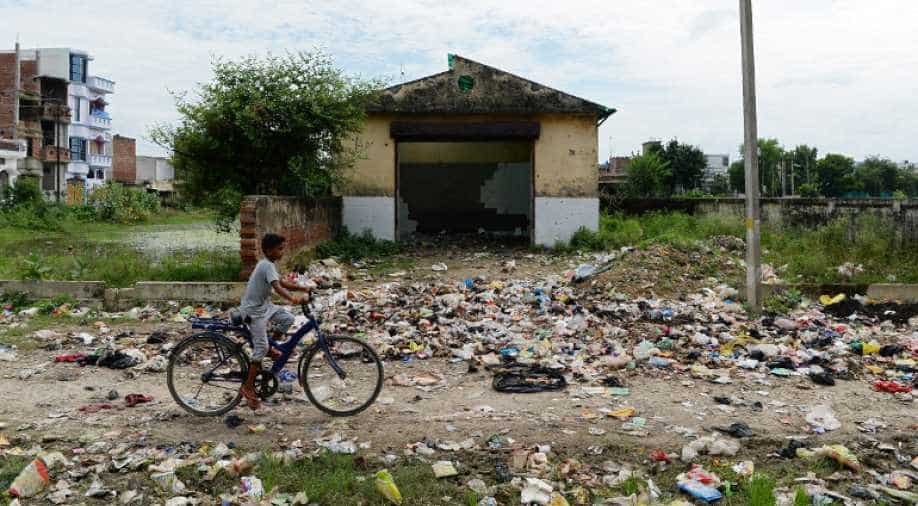 Most locals hope the 'dirtiest city' accolade will shame politicians into action and break the cycle of civic apathy and corruption which is blamed for the mess. Photograph:( AFP )

Flies throng over piles of feces, the drains overflow with sewage and the foul smell in the air is inescapable.

Welcome to Awas Vikas: one of the most exclusive parts of Gonda, a city suffering the ignominy of being branded the dirtiest in India.

Even in such upmarket areas, garbage trucks are rarely seen, green spaces are littered with rubbish, and residents are desperate for their bickering leaders to bring about change.

Gonda, 125 kilometres from the Uttar Pradesh state capital of Lucknow, was best known as a quiet stopover point for people traveling to Nepal or to see the region's temples.

Infamy arrived in May when Gonda came bottom of an Indian government cleanliness survey of 434 cities. The study looked at the use of toilets, waste collection, civic infrastructure and other areas.

It is a daily battle for pedestrians and cars to navigate the piles of plastic bottles, discarded food containers, and animal excreta.

The stray cows love it, but residents in Awas Vikas are at breaking point.

"The filth and the stench have made us infamous across the country," said Durgesh Mishra, gesturing desolately at a crater in the road by his house, which is now filled with dirty water and buzzing with mosquitoes.

"It is a really pathetic state of affairs. We've been rated as India's dirtiest -- just look around and you can see it's a perfect ranking. You can't imagine how we live here," he added.

Most locals hope the 'dirtiest city' accolade will shame politicians into action and break the cycle of civic apathy and corruption, which is blamed for the mess.

"The manpower and infrastructure issues that we face today are a result of unplanned development over the last 10 years," Rajiv Rastogi, a trader, and veteran local politician told AFP.

Political rivalry between Gonda and the Uttar Pradesh state government has also bogged down projects.

Signs of the dysfunction are everywhere.

Houses have been abandoned and left to decay, while neighborhood parks and ponds have become dumping grounds.

JB Singh, the district magistrate for the region, acknowledges there are problems but does not believe Gonda's ranking is fair. In photo: A man walks past pigs bathing in a muddy puddle. (AFP)

Gonda's citizens however do not agree with Singh. '...just look around and you can see it's a perfect ranking. You can't imagine how we live here,' said one resident.   (AFP)

Those who can afford it, hire labourers to clear garbage from outside their homes -- even if that means discarding it out of sight in another part of town. (AFP)

Those who can afford it, hire laborers to clear garbage from outside their homes -- even if that means discarding it out of sight in another part of town.

Kanshiram colony is regarded by some as the most insalubrious part of India's dirtiest city.

"We live in sickness. Diseases like cholera are an everyday issue," Kanshiram resident Sushila Tewari told AFP as she swatted away flies and mosquitoes from a waste-filled pond opposite her home.

"We don't see a municipal worker around here for days at a time. When stray animals die and lay rotting here, sometimes we have to cover them with soil ourselves," she added.

Kirti Vardhan Singh, a three-term lawmaker for the area, said he has been "bombarded" with telephone calls and social media messages since the survey.

"It was very, very embarrassing," he told AFP. "I explained to as many as I could that, as a parliamentarian, I don't have any say or authority over local civic body matters -- the mismanagement, inaction and corruption over the last decade."

Singh acknowledges that Gonda is dirty but is skeptical that it is really the dirtiest city in the nation.

"I feel it got the ranking because of a lack of cooperation and communication between the survey team and the local administration," he said.

He feels Gonda's story is typical of other smaller Indian cities that have grown quickly in India's economic boom without a plan or rules.

J.B Singh, the district magistrate for the region, acknowledges there are problems but does not believe Gonda's ranking is fair.

"The bottlenecks were the biggest issue in the past but we are working to bring change, and locals will see it within the next two months," Singh said, adding that new garbage trucks and dustbins are being purchased.

The town is also looking for a private waste collection agency to help tackle the problem and will launch a cleanliness awareness campaign, he explained.

Some argue Gonda's ranking and the subsequent media attention has made an issue that is endemic across the nation, seem like a unique local problem.

Even if the city's administrative and political problems are solved, many feel the biggest challenge is changing attitudes in a populace often happy to dump at will.

Prime Minister Narendra Modi launched the 'Clean India' campaign to improve public hygiene, cleanliness and encourage people to use public toilets, soon after he came to power in 2014.

Promising millions in central government funding for the drive to get the nation clean in time for the 150th anniversary of the birth of Mahatma Gandhi in 2019, Modi has said eradicating filth is a patriotic duty.

"This mission aspires to realise Gandhi-ji's dream of a clean India," announced Modi, who pledged during his election campaign to build "toilets first, temples later"

He said at the time: "Together we can make a big difference."