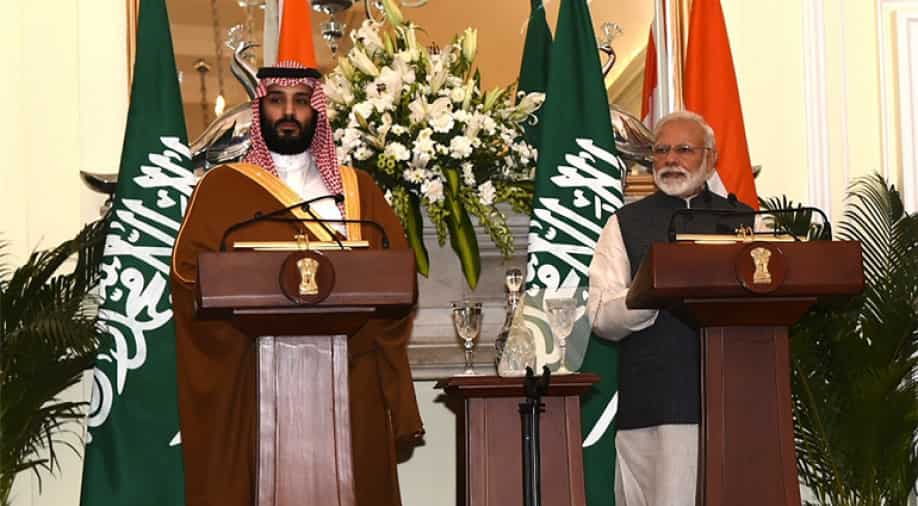 Addressing a joint press conference, PM Modi called for countries who support terror to be put under pressure.

Recalling the last week's Pulwama terror attack, PM said, "attack shows the inhumane face of this scourge and threat to the world. To act effectively against terror, both agreed, pressure needs to be put on countries who support terror.  Need to destroy the infrastructure of terror, those who support terror. Need a common action plan against extremism."

This is the second meeting between the Indian PM and the Saudi prince in the last three months. They last met on the sidelines of G20 summit in Argentina on November 30.

Speaking about the common concerns on terror and extremism, the Saudi prince said, "We would like every kind of cooperation with India, especially on intelligence sharing. Not only India, but we will also work with countries in the region to act against the scourge to have a better future."

Saudi Arabia has also joined the International solar alliance, becoming the 73rd country to do so. India's E visa programme for Saudi Citizens is also being expanded.

Earlier in the day, he was given a ceremonial reception at the forecourt of Rashtrapati Bhawan. He also lauded role by played by Indians in building the kingdom.

"Since we remember ourselves, Indian people are friends and part of building Saudi Arabia in the past 70 years. A lot of Saudis work and develop a lot of things in India for hundreds of years," Modi said.

PM Modi also lauded the positive role played by the Indian community in the country. The country hosts 2.7 million strong Indian community, one of the largest in west Asia, sending remittance of over US$ 11 billion annually.

Both Riyadh and New Delhi have agreed on a two yearly summit-level meet and establishment of strategic partnership council at ministerial level between both the countries.

Crown prince arrived in India on Tuesday and was received by Prime Minister Narendra Modi.

MBS arrived in India a day after his two-day visit to Pakistan. It is interesting to note that the Saudi prince went back to Riyadh after his Pakistan visit, and came back again to New Delhi, a development which many will see de-hyphenation by Saudi Arabia between Pakistan and India and something which New Delhi will prefer in the aftermath of Pulwama terror attack.

India is one of the eight strategic partners of Saudi Arabia with which the West Asian country intends to deepen partnership in areas of political, security, trade and investment and culture. Bilateral trade between both the countries stood at US$ 27.48billion in the financial year 2017-18. Saudi Arabia is India's fourth largest trading partner with New Delhi getting 17 per cent of its oil imports from the country.

Modi had visited Riyadh in April 2016. Saudi Arabia's King Salman had honoured him then with the "Sash of King Abdulaziz", the highest civilian decoration awarded by the West Asian country.

Salman is Saudi Arabia's second-most important person after the king and his designated successor.