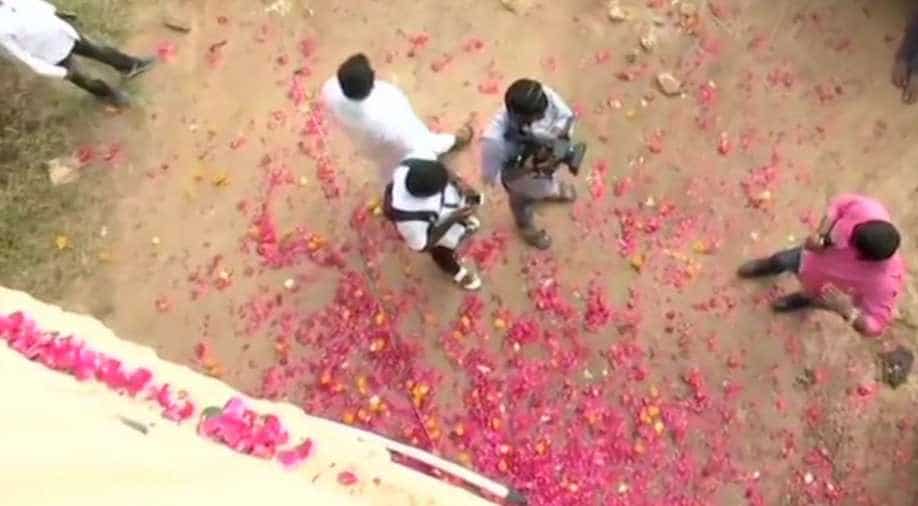 Hundreds of people gathered at the society of the woman veterinarian, who was brutally raped and murdered in Shamshabad on November 27, and distributed sweets among all, the report added.

Hours after all the four accused in the Telangana veterinary doctor's rape and murder were killed in an encounter, the entire state, including the neighbours of victim, erupted in celebrations and applauded the police force who carried out the task, reported news agency ANI.

Hundreds of people gathered at the society of the woman veterinarian, who was brutally raped and murdered in Shamshabad on November 27, and distributed sweets among all, the report added.

#WATCH Hyderabad: People celebrate and cheer for police at the encounter site where the four accused were killed in an encounter earlier today. #Telangana pic.twitter.com/WZjPi0Y3nw

The people also distributed sweets to cops and congratulated them besides tieing rakhis to the police personnel and thank them while raising slogans of "hip-hip hurray!".

"Police personnel also have daughters. They also have anger in their hearts. We are glad that they have taken this step. We are so proud of them. We have tied rakhis on their wrists as they have proved that they are there for us," a woman said amid celebrations.

Locals also showered rose petals on police personnel at the spot where the encounter took place.

They raised slogans of "DCP Zindabad (Long-live the DCP) and ACP Zindabad.

The accused were killed by the police when they tried to escape while being taken to the crime spot.

The doctor was brutally gang-raped and killed by four persons before they burnt her body in Shamshabad area on November 27.

The four accused were in judicial custody at Cherlapally Central Jail in Hyderabad.