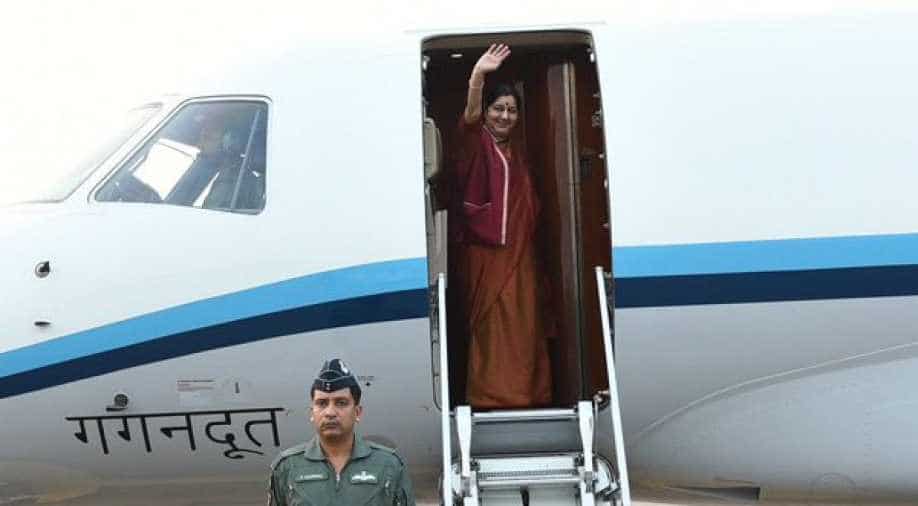 Sushma Swaraj departs for a four-day visit to the Gulf countries of Qatar and Kuwait. Photograph:( ANI )

Swaraj will have engagements in Qatar on October 28-29 and in Kuwait on October 30-31.

External Affairs Minister Sushma Swaraj on Sunday departed for a four-day visit to the Gulf countries of Qatar and Kuwait.

Swaraj will have engagements in Qatar on October 28-29 and in Kuwait on October 30-31.

This will be her first visit to both the countries.

She will also call on His Highness Sheikh Tamim Bin Hamad Al-Thani, Emir of the State of Qatar.

During her visit, the External Affairs Minister will also interact with the Indian community in Doha.

Qatar hosts about seven lakh Indians who form the largest expatriate community there.

The tiny Gulf nation is a reliable energy partner, supplying more than 50 per cent of India`s natural gas imports.

The bilateral trade between the two countries was USD 9.9 billion in 2017-18.

In Kuwait, Swaraj will hold a bilateral meeting with her counterpart, His Excellency Sheikh Sabah Al Khalid Al Sabah, Deputy Prime Minister and Minister of Foreign Affairs of the State of Kuwait.

She will also call on His Highness the Amir of the State of Kuwait, Sheikh Sabah Al-Ahmad Al-Jaber Al-Sabah and interact with the Indian community.

Kuwait is a reliable energy supplier to India and hosts about ten lakh Indians forming the largest expatriate community.

The two-nation visit is in pursuit of India`s objective of enhanced engagement with the Gulf region which is in India`s extended neighbourhood, the MEA said in a statement.