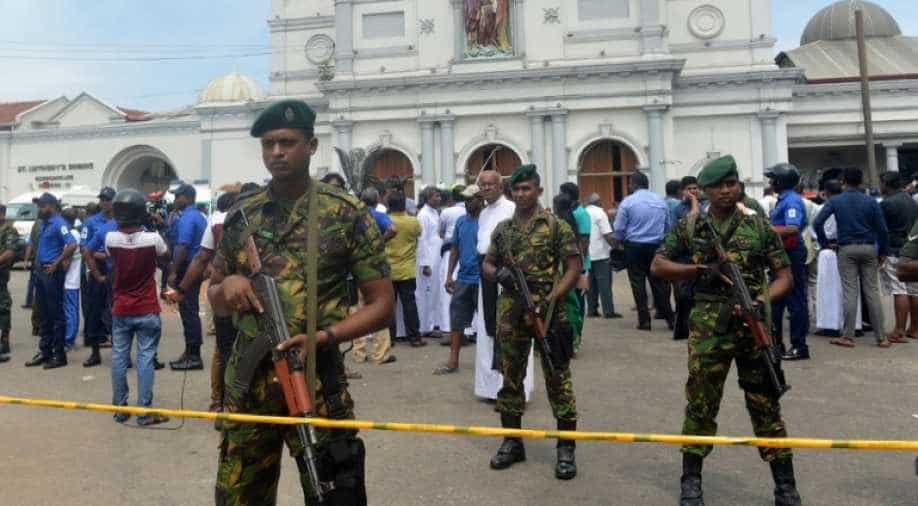 The Indian investigators said they had been monitoring Aadhil since 2016 and named him in two chargesheets filed in Indian courts.

A Sri Lankan software engineer suspected by authorities in Sri Lanka of having provided technical and logistical support to the Easter Sunday suicide bombers was monitored by Indian intelligence agencies three years ago for links with Islamic State suspects, investigators said.

Four sources in Sri Lankan investigating agencies said they believed Aadhil Ameez, a 24-year-old, was the link between two groups that carried out the attacks on churches and hotels that killed more than 250 people and wounded hundreds more.

Aadhil has been arrested and is in police custody, the sources said. His arrest has not been made public, but when asked by Reuters, Ruwan Gunasekera, the main spokesman for the Sri Lankan police, confirmed Aadhil was taken into custody on April 25, four days after the attacks.

The spokesman declined to give more details.

A police official at India’s National Investigation Agency (NIA) and another police official in the western state of Gujarat said they were providing assistance to Sri Lankan authorities.

Aadhil, who describes himself on his LinkedIn profile as a senior engineer/programmer/web designer with a masters degree in computer science and a bachelors in political science from UK universities, could not be reached for comment.

He does not yet have a lawyer and under Sri Lanka’s tough new emergency laws imposed after the attacks, he can be held indefinitely.

His father, M Ameez, who lives in Aluthgama, a town south of Colombo, denied that Aadhil was involved with the plotters and said such “allegations are lies”.

The Indian investigators said they had been monitoring Aadhil since 2016 and named him in two chargesheets filed in Indian courts against suspected Islamic State operatives as being one of their contacts.

According to one of the chargesheets, reviewed by Reuters, he showed up in Facebook, WhatsApp and Telegram chat with two of the suspects who are on trial for plotting an attack on a synagogue in the western city of Ahmedabad.

The two suspects Ubed Ahmad Mirza, a lawyer, and Stimberwala Mohamed Kasim, a hospital technician, were accused of planning “lone-wolf” attacks, according to the charge sheet.

Lawyers for both men rejected the allegations and said they were innocent. Both lawyers declined to comment on the possible role of Aadhil.

Aadhil has also been named in another charge sheet filed in court by the NIA for providing propaganda and online material to three Indians arrested in early 2016 for promoting Islamic State.

The three men, Sheikh Azhar ul-Islam, Adnan Hassan and Mohammed Rafiq Sadique Shaikh are on trial in a special Delhi court facing charges of criminal conspiracy to propagate the ideology of Islamic State, recruit, raise funds and facilitate the travel of people to Syria, according to the charge sheet.

Sheikh Mohammad Munawar, a cousin of ul-Islam, said the charges were fabricated and that he had no criminal record ever.

Families of the other two accused could not be reached. Their lawyers were not immediately available for comment.

Reuters was unable to determine when the Indians informed Sri Lankan authorities of the surveillance. The two officials declined to say whether they continued to keep Aadhil under surveillance after they completed an investigation of the cases in India.

Sri Lankan authorities have said two local Islamist groups - the National Tawheed Jamaath (NTJ) led by radical preacher Zahran Hashim and the Jamathei Millathu Ibrahim (JMI) - were involved in the synchronized blasts in Colombo, the island nation’s capital, and two other towns. Islamic State has claimed responsibility for the attacks.

The groups used the dark web and WhatsApp to communicate, they said.

However, investigators don’t know yet whether Aadhil was simply a facilitator for the bombers, or if he was also one of the ring leaders involved in planning and executing the attacks.

Last week, police raided IT firm Virtusa, where Aadhil had interned in 2013, according to his profile. One current employee has been detained for questioning in connection with the attacks, police say, but no other details have been provided. 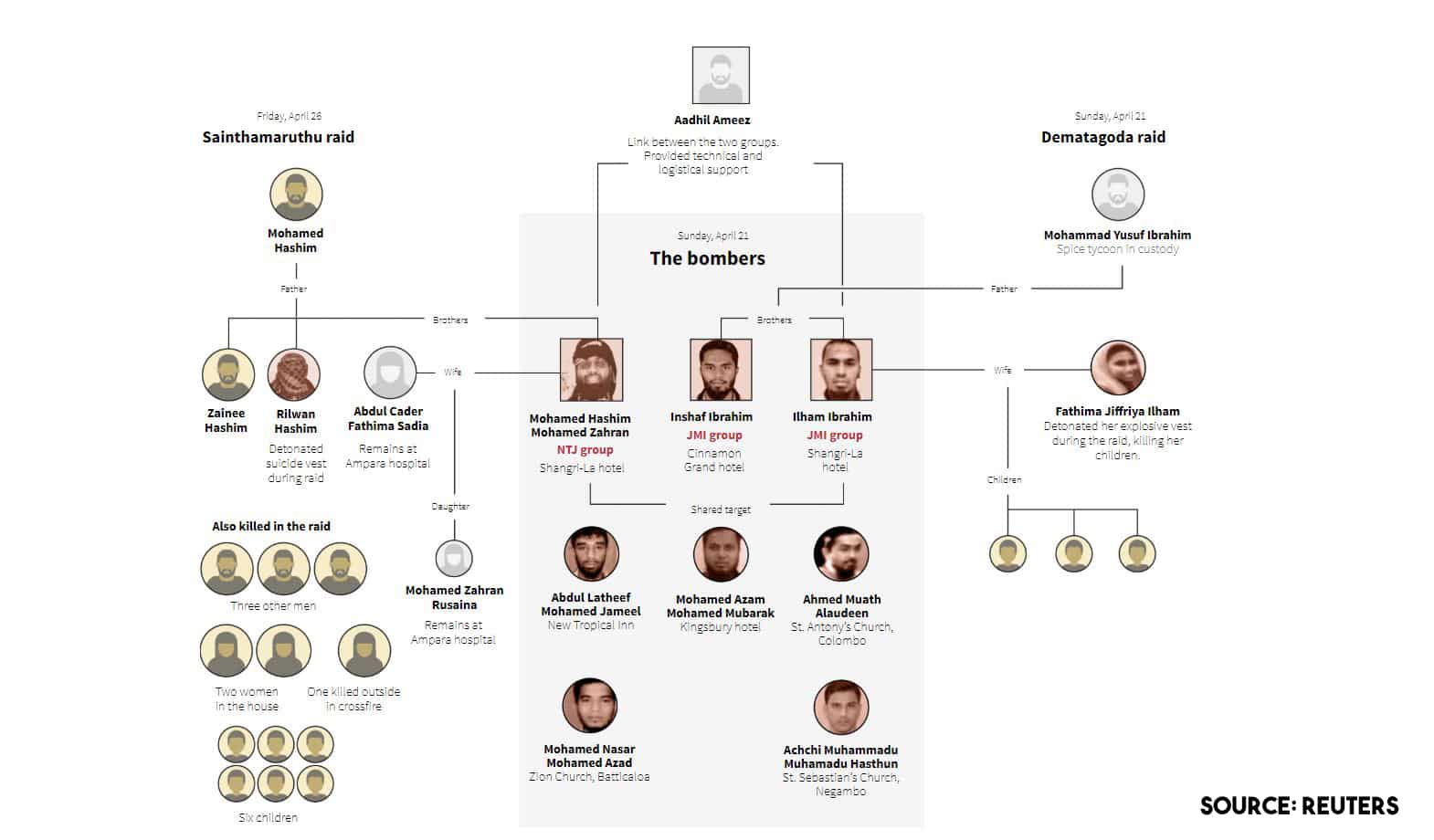 India, with one of the world’s largest populations of Muslims, has claimed success in foiling several Islamic State cells, mostly in southern and western India.

Court documents reviewed by Reuters show that the online conversations between the Sri Lankan and the two Indians in western India began in the summer of 2016 and lasted until the arrest of the two Indians in late 2017. The documents describe how Aadhil Ax, as he called himself online, asked the Indians if they had heard about the atrocities being committed against Muslims in Sri Lanka by the majority Buddhist community.

He talked about his own experiences: that he had been in jail, that his house had been torched and that he limped because of beatings, the documents seen by Reuters show. Investigators and neighbours in Sri Lanka say none of these was true.

The Sri Lankan investigators interviewed by Reuters say Aadhil made claims he was a journalist and a PhD candidate in some of his online postings, which also were false.

They said they believed Aadhil, operating largely from his home, was a key part of the Easter bombings plot and helped in communications and training.

“He was the main technology person for them,” said one of the CID sources involved in the investigation. The source said Aadhil was helped in this by Abdul Latheef Mohamed Jameel, one of the eight suicide bombers who detonated his explosives at a guesthouse after failing to do so at Colombo’s luxury Taj Samudra hotel.

About a week before the bombings, Aadhil met Jameel, Zahran the extremist preacher, and Inshaf Ibrahim and Ilham Ibrahim, the two brothers from a family engaged in the spice trade in Colombo, the other sources said. The latter three men blew themselves up in five-star Colombo hotels.

The CID source said that Aadhil, Zahran and the Ibrahim brothers had leased land in Wanathawilluwa town in the north and set up a training camp. Police raided the place in January this year and discovered a large number of explosives, but did not know at the time who had leased it.

When police raided Aadhil’s home four days after the bombings, all his computer files were found to have been deleted.

“He seems to have played an important role in setting up communications for the attackers, helping organize meetings and training camps,” said one of the military sources.